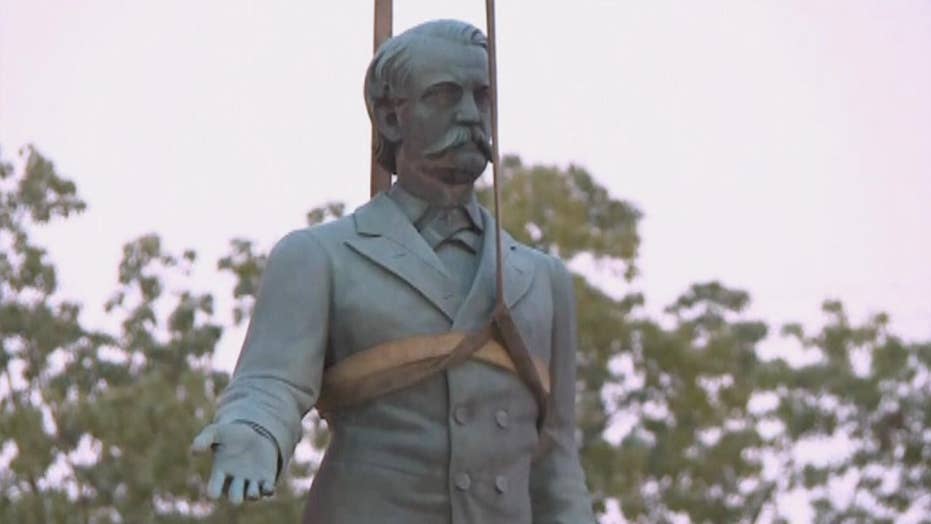 While the public outcry over statues and monuments honoring Robert E. Lee, “Stonewall” Jackson and other Confederate soldiers has quieted down since the summer, the question about what to do with their recently-removed memorials still lingers.

Some are collecting dust in warehouses while officials search for a new home for them. Some are being handed over to the same associations that commissioned them over a hundred years ago or plopped down in cemeteries that are the final resting place for Confederate dead. One massive monument has found a new home along the banks of the Ohio River in a Kentucky historical park.

A 70-foot concrete plinth honoring Confederate soldiers had for years drawn criticism from students and faculty at the University of Louisville before it was taken down earlier this year and moved about 45 miles to Brandenburg. The monument was placed in the town’s historical walk alongside other historical statues.

A memorial to Confederate soldiers stands on the banks of the Ohio River in Brandenburg, Kentucky, U.S. May 29, 2017. The memorial was recently removed from the campus of the University of Louisville. REUTERS/Bryan Woolston - RC19639698A0

Brandenburg Mayor Ronnie Joyner told Fox News that the town was not trying to honor the Confederate cause by accepting the plinth, but instead wanted to represent another aspect of American history at their outdoor museum.

“This is not a black versus white issue or something to honor the Confederacy,” Joyner said. “We’ve had the history walk since 2000 and we have statues of Native Americans and the Underground Railroad.”

Joyner added that the town has also modified the plinth with new plaques to make it a memorial to both Union and Confederate soldiers.

As for accepting any more Confederate statues, Joyner said Brandenburg won’t be taking more unless the controversy dies down. He did, however, make one exception.

“I would like to have a statue of John Hunt Morgan, but that is because he was active in these parts,” Joyner said in reference to the Confederate general who led a highly publicized raid across the Ohio River into Indiana and Ohio in 1863.

Along with historic parks, cemeteries where Confederate soldiers are buried have become another home for the removed statues.

Orlando city officials in June moved a statue known as “Johnny Reb” to a section of the nearby Greenwood Cemetery where 37 Confederate soldiers are interred.

“This is the Confederate section of the cemetery so, historically, it belongs here,” Don Price, sexton for the cemetery, told the Orlando Sentinel. “We’re the keeper of the history.”

Not all cemeteries, however, are as open to housing Confederate statues as Greenwood is.

Many of the cheaper, concrete statues to the Confederacy were commissioned in the early decades of last century by hereditary groups like the United Daughters of the Confederacy and – since the call for the removal of these monuments started up – the organizations have been taking the statues back.

In the college town of Gainesville, Fla., the United Daughters of the Confederacy were given a statue of a Confederate soldier known as “Ole Joe” earlier this year after a local history museum declined to accept it and a veterans group objected to its transfer to a nearby park. The UDC, a group that has been accused of supporting white supremacist ideas, erected the monument in 1904 in front of the Alachua County courthouse.

While some of these statues have found new homes, many more have been tucked away in warehouses in cities and towns across the U.S. as municipalities figure out what to do with them.

Workers remove a monument dedicated to the Confederate Women of Maryland early Wednesday, Aug. 16, 2017, after it was taken down in Baltimore. Local news outlets reported that workers hauled several monuments away, days after a white nationalist rally in Virginia turned deadly. (Jerry Jackson/The Baltimore Sun via AP)

In Baltimore, which furtively took down a massive bronze statue of Confederate Gens. Robert E. Lee and Thomas J. “Stonewall” Jackson in August amid threats that activists would tear them down, officials have been mulling over what to do with the memorial.

A number of universities and museums have been approached about taking the statue, but so far the city has not been able to find a suitable home for it – a fact that has been an annoyance to the Maryland state agency that oversees historical monuments.

“While the Trustees appreciate that the issues concerning relocation are complex, they also believe that establishing benchmarks are imperative to seeing this matter through to resolution,” Elizabeth Hughes, director of the Maryland Historical Trust, wrote in letter obtained by the Baltimore Sun. Hughes asked that the city find somewhere to put the monuments within nine months and secure their installation at the new location within 18 months.