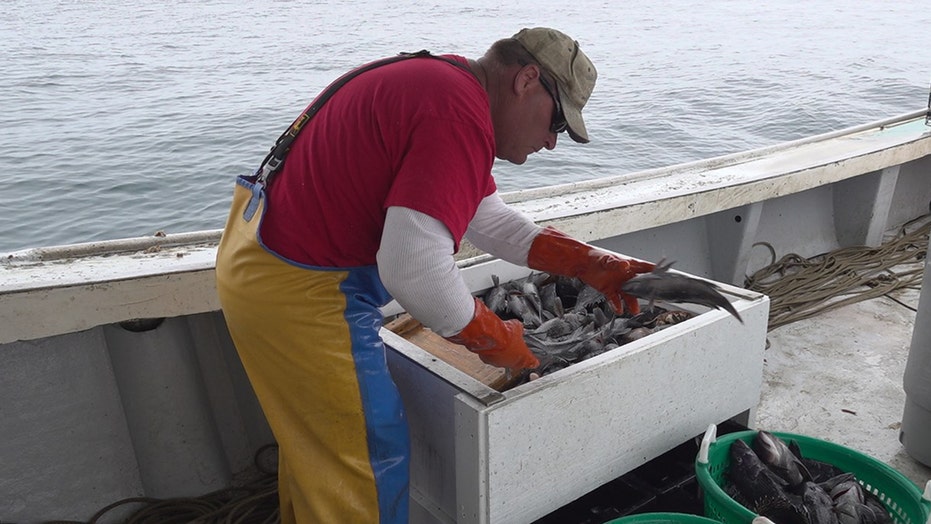 Most people aren't dining out right now because of the coronavirus, and it's causing a major disruption in the seafood supply industry. Amid restaurant closures, commercial fishermen are turning to new ways to sell their catch.

REHOBOTH BEACH, Del. – Restaurant closures due to the coronavirus pandemic continue to cause a major disruption in the seafood supply industry – and as a result, some commercial fishermen have turned to new ways to sell their catch.

“Everything is just being devastated because of the coronavirus,” said Wes Townsend, a full-time commercial fisherman in Rehoboth Beach, Del.

Townsend has been fishing for about 44 years.

“Black sea bass is the main thing that we have. We also do lobster, certain times of the year we do rock fishing,” Townsend said.

This season, though, he’s catching a lot less — and not because of a lack of fish.

“This year, with the coronavirus, we have actually had buyers tell us, ‘Don’t go, we do not want your fish. We have no markets,’” Townsend added.

It’s something he said he’d never experienced before.

“We have never had the buyers tell us don’t go,” Townsend said.

With most restaurants closing their doors, the seafood supply industry has been suffering.

According to the most recent data from the National Oceanic and Atmospheric Administration, more than two-thirds of seafood has been served at restaurants.

In 2017, American consumers spent about $102.2 billion on fish, and nearly $70 billion of that was spent in restaurants.

“We’ve had a big issue with seafood supply. It’s pretty much crashed with all of the bottoming out of restaurants,” said Edward Hale, a marine advisory specialist with the Delaware Sea Grant.

“Everybody in the fishing industry is going to be affected. I know some fishermen that are going to be losing 60 percent of their income,” Townsend said.

To keep business going, industry workers have been getting creative.

Some commercial fishermen are selling seafood privately to stay afloat amid restaurant closures.

“Normally we’d have this bait and tackle store open,” said Bert Adams, the owner of Hook ‘em and Cook ‘em, a bait and tackle shop in Rehoboth Beach. It’s closed for the time being, so he’s turned to social media to sell seafood.

The University of Delaware’s Sea Grant program set up a website connecting commercial fishermen with private buyers. According to Hale, it’s a way for fishermen to sell some of their catch directly to consumers while restaurants are closed.

“I would consider this an economic lifeline. I mean, most of our commercial fishermen and shellfish producers are struggling at this time to make any type of sales,” Hale said.

Townsend has taken part in it, while still fishing for buyers who stock fish markets in cities along the East Coast. Most of his first catch – about 1,200 pounds of fish – will end up there.

“Up and down the coast from North Carolina to New York, even out as far as Ohio,” Townsend said.

Commercial fisherman Wes Townsend is still fishing for buyers who stock fish markets in cities along the East Coast.

The rest are set to go directly to people in the area who call ahead.

“I have probably had a dozen emails, phone calls, text messages just yesterday,” Townsend said. “You know it’s fresh, it’s caught that day and you can get it for a cheaper price that you could from the markets.”

“This time of year, there’s only two of us on the boat, so if I am on one side of the cabin and Dan’s on the other side, we maintain our distance. Both have gloves on all day long,” Townsend said.

“I love doing this. Wes, obviously, has been doing it a whole lot longer. And I always see him with a smile on his face,” Iacangelo said.

“This is just another obstacle that we have to overcome. I mean, it’s going to hurt, but we’ll be okay,” Townsend added.