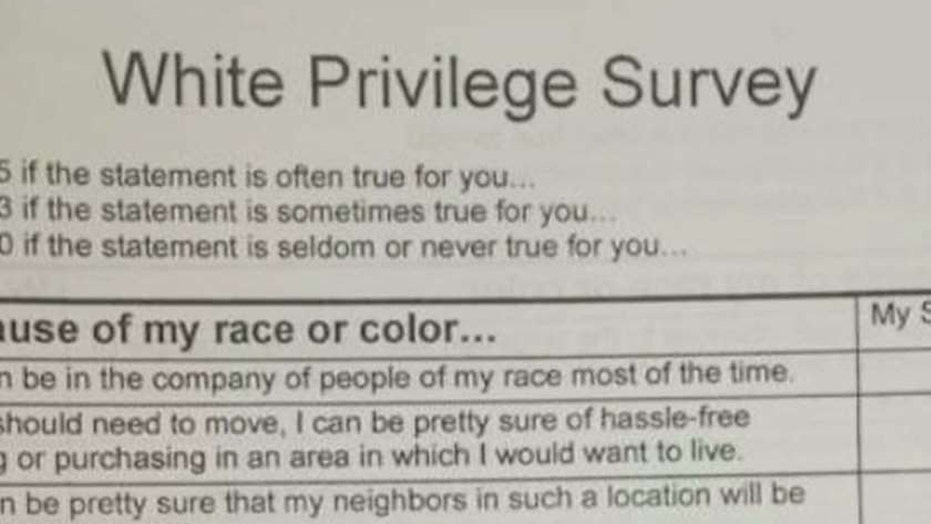 A "white privilege" survey handed out to staff members at a Denver-area school district rankled some employees, but a spokesperson for the district said Wednesday it was useful in finding "opportunity gaps."

The survey, distributed at Cherry Creek School District, included 26 statements such as, "If a police officer pulls me over, I can be sure I haven't been singled out because of my race," and "I can choose blemish cover or bandages in 'flesh' color and have them more or less match the color of my skin." Staffers would score each statement based on how much they felt it applied to them.

More than one employee voiced concerns about the survey, KMGH reported. A student told the channel, "the title is definitely suspicious."

"It was designed to make people aware that their experiences, whatever they are, wherever they come from, are not exactly the same as other people's," district spokesperson Tustin Amole responded. "This work works."

Just over half of the district's students are white, according to KMGH.

Two weeks ago, parents complained after a high school class in Oregon assigned the survey to its students.

Parent Jason Schmidt said his son "should be learning actual education and not be a part of some social experiment or some teacher’s political agenda."

Beaverton School District spokeswoman Maureen Wheeler said social issues were a focus in that class. "The survey is just one activity that engages students in exploring this area."