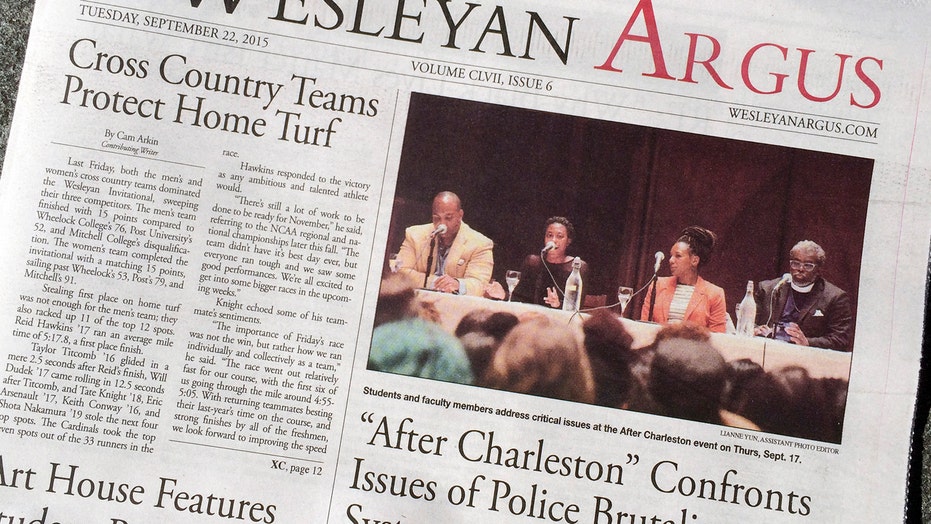 An Iraq War veteran has found himself in a First Amendment battle after taking on the Black Lives Matter movement in his role as a college newspaper columnist.

Bryan Stascavage, a 30-year-old Wesleyan University student who served two tours in Iraq, penned an op-ed in the school newspaper that criticized the Black Lives Matter movement for creating an environment he believes advocates violence by spreading anti-cop hatred, and questioned the movement's legitimacy.

"Is the movement itself actually achieving anything positive?" Stascavage wrote in his op-ed, "Why Black Lives Matter Isn't What You Think," published Sept. 14 in the Wesleyan Argus.

"Is it worth another riot that destroys a downtown district? Another death, another massacre? At what point will Black Lives Matter go back to the drawing table and rethink how they are approaching the problem?" he questioned.

"As members of a university community, we always have the right to respond with our own opinions, but there is no right not to be offended."

The opinion piece unleashed a firestorm of criticism, first directed at Stascavage and later at the school newspaper and its editors. Stascavage said he's been called a racist by students on campus, while some activists are calling on the school's student government to defund the newspaper.

A petition demanding the Wesleyan Argus lose funding unless it meets certain demands has signatures from at least 172 students, staff and recent alumni. Signatories threatened to boycott the paper because they said it fails to "provide a safe space for the voices of students of color and we are doubtful that it will in the future."

The university administration, meanwhile, defended Stascavage's right to free speech over the weekend.

"Debates can raise intense emotions, but that doesn't mean that we should demand ideological conformity because people are made uncomfortable," Wesleyan University President Michael Roth wrote in a blog post along with Provost Joyce Jacobsen and Vice-President for Equity and Inclusion, Antonio Farias.

"As members of a university community, we always have the right to respond with our own opinions, but there is no right not to be offended," said the post, titled "Black Lives Matter and So Does Free Speech."

"We certainly have no right to harass people because we don’t like their views," the administration said. "Censorship diminishes true diversity of thinking; vigorous debate enlivens and instructs."

Stascavage, a sophomore majoring in philosophy and political science at the Connecticut university, said he knew his column would be controversial for posing "uncomfortable questions," but said he never believed it would "hit nerves to the extent that it has."

"The whole point of the article was to encourage people to think of alternative ways to get the Black Lives Matter movement to communicate their message effectively, instead of destroying a downtown district and screaming, 'We want change,'" Stascavage told FoxNews.com Thursday.

"They are painting the police with a broad stroke as being racist killers," he said. "I don’t agree with cheering when a police officer is killed. The rhetoric is starting to slide from a political movement to this mob mentality that leads us down a bad path."

Stascavage, who has penned about 20 pieces for the school newspaper since his freshman year, claims editors at the newspaper said nothing to him prior to the op-ed's publication.

After the backlash, however, editors-in-chief Rebecca Brill and Tess Morgan issued a lengthy statement apologizing "for the distress the piece caused the student body."

"The op-ed cites inaccurate statistics and twists facts," the two wrote. "As Wesleyan’s student newspaper, it is our responsibility to provide our readership with accurate information. We vow to raise our standards of journalism and to fact-check questionable information cited in articles, including those in the Opinion section, prior to publication."

Neither Brill nor Morgan returned messages seeking comment Thursday. Stascavage said the editors-in-chief have yet to speak to him about the piece in question.

"I was very disappointed," Stascavage said of their statement. "It looked like they just threw me under the bus."

Brill and Morgan noted, however, that "The Opinion section is open to any writer who wants to share a view, whether or not the Opinion editors and the editors-in-chief agree with it."

"While we strive to make articles as coherent as possible before publication, we edit opinions for style rather than content, even if they are unpopular, controversial, and widely contested," they said.

Stascavage, who plans to continue writing for the paper, said the ordeal has proved a valuable learning experience.

"I have learned more in the past 10 days than I learned in three years of college," he told FoxNews.com. "Freedom of speech is critical for democracy."