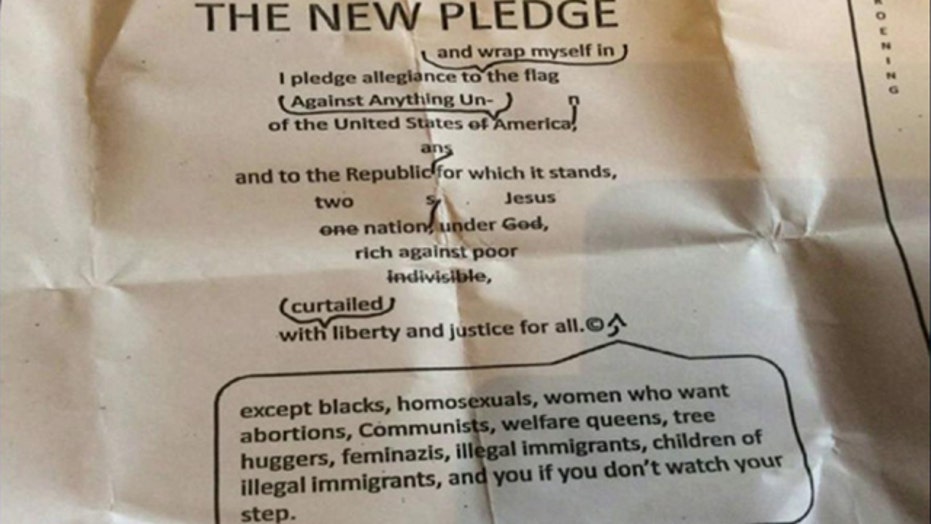 If you sign up for Denver college professor Charles Angeletti's American Civilization class, be forewarned that you're going to have to recite his invective-filled 'New Pledge' -- and according to some of his students, also be ready to swallow a big helping of his politics.

Angeletti, who teaches at Metropolitan State University of Denver, has students learn an anti-American spoof of the Pledge of Allegiance that denounces the U.S. as a Republican-controlled bastion of injustice, all while spewing his own far-left brand of politics, according to current and former students.

“I pledge allegiance to and wrap myself in the flag of the United States Against Anything Un-American,” reads Angeletti's version. “And to the Republicans for which it stands, two nations, under Jesus, rich against poor, with curtailed liberty and justice for all except blacks, homosexuals, women who want abortions, Communists, welfare queens, treehuggers, feminazis, illegal immigrants, children of illegal immigrants, and you, if you don't watch your step.”

The anti-U.S. recitation, first reported by higher education blog Campus Reform, was a satirical pledge aimed at getting students to question their nation's leadership, Angeletti said. The self-proclaimed atheist and socialist told the site that he has been distributing the pledge in his classes for nearly 20 years as part of his lesson plan.

“We’re very racist, we’re very repressive, we’re very Christian oriented, we don’t tolerate other kinds of thinking in this country,” Angeletti told Campus Reform. “I could go on and on -- and do, in my classes, for hours about things that we need to do to make this a better country.”

A student from Angeletti’s class told Campus Reform that the flier was handed out to the entire class and all students were required to recite it.

“This was an attempt to propagandize an entire classroom of young adults,” Steven Farr, a freshman majoring in meteorology, told the blog site.

“This is typical elite, progressive, post-modernist garbage,” said Pete Hegseth, a Fox News contributor and CEO of Concerned Veterans for America. “I hope and believe that vets in his class will challenge this professor.

“We have seen this time and time again. Lessons like this stack the deck against veterans and basically tell them, you fought for nothing," Hegseth added. "You fought for a lie.”

On the academic review site RateMyProfessors.com, students appear to mostly like Angeletti and consider him an easy grader, although some said he punishes conservatives.

"Charles is the best professor at MSU Denver," wrote one student who took the class.

But another student said your opinion can cost you if it doesn't jibe with Angeletti's.

"If you are a liberal, you will like him," a student wrote. "He encourages you to speak out and voice your opinion... Unless of course, you are a Republican."

Another student said class was unfocused.

"All this teacher does is ask what is on your mind at the start of every class and that is how class is run everyday based on what students say," the student wrote. "The only reason I got a B is because I hardly showed up to that class because it was so pointless. All he does is argue with everything you say and you are always wrong. Didn't learn anything."