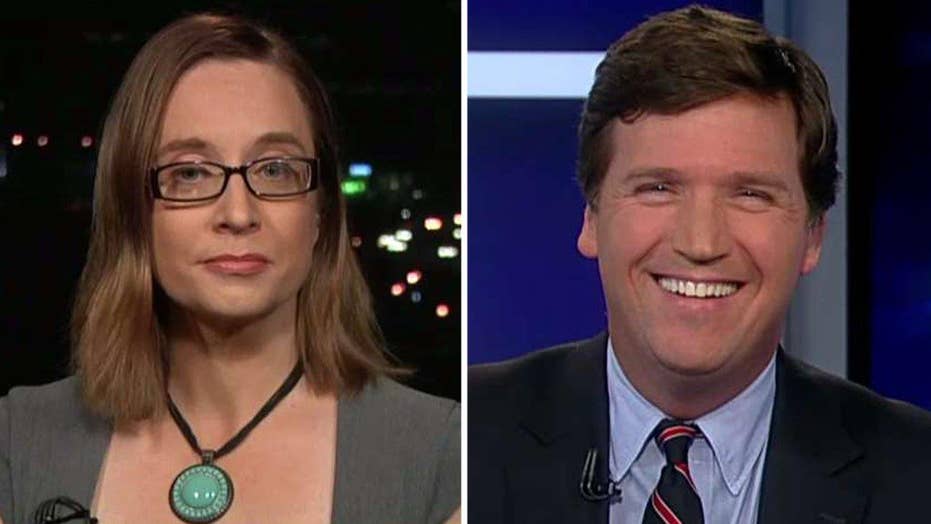 Tucker to prof: Shouldn't students toughen up over election?

Tucker Carlson tries to get professor to explain her approach to students hysterical over Hillary Clinton's loss to Trump in the election, define 'safe spaces' and the lack of intellectual diversity on college campuses

Teddy bears, Play-Doh and coloring books are staples of nursery schools, but now they are showing up on college campuses to help distraught students cope with the election of a president they don’t like.

Around the nation, students are turning to the tools of toddlers as a bizarre form of therapy in the wake of Donald Trump's election last week. Colleges and universities are encouraging students to cry, cuddle with puppies and sip hot chocolate to soothe their fragile psyches, an approach some critics say would be funny if it weren't so alarming.

“This is an extreme reaction from millennials who are being forced to come to terms with the fact that we have a president that they don’t like –this is what losing feels like,” Kristin Tate, the 24-year-old author of "Government Gone Wild," told FoxNews.com. “We are grooming our students to be sensitive crybabies when we need to be showing students how to deal with world situations and how to be adults –there are no ‘safe spaces’ in the real world.”

Among the top-notch schools sending devastated students back to their early childhood:

University of Michigan spokesperson Kim Broekhuizen told FoxNews.com the law school was providing these programs based on requests from the students on campus. But on Thursday, following media scrutiny, the event was scrubbed from the school’s website and replaced with a more age-appropriate discussion of the “limitations of executive power.”

In an email, Broekhuizen declined to say why the original event was scrapped, and said the Ann Arbor school often faciilitates similar stress-battling activities.

At University of Michigan-Flint, students are able to visit “safe spaces” and receive counseling for their post-election needs, a program that Business Professor Mark Perry called “disturbing.”

“Institutions of higher learning have gone from being places that might be described as ‘intellectual boot-camps,’ where [students] are challenged with a diversity of new ideas, to being places that might now be, more accurately, described as ‘kindergartens’ for adults where they are no longer challenged, but instead treated as fragile, intellectual children and coddled with a ‘safe place’ response to anything challenging or unsettling,” Perry, who also is a scholar at The American Enterprise Institute, told FoxNews.com.

Boston University skipped the hot chocolate and therapy animals, but scheduled a set of post-election discussions aimed at helping students process a democratic election that didn't go their way.

“Because the results of this election differed so dramatically from pre-election polls and the expectations gleaned from national media coverage, many people had difficulty comprehending how it came about,” Boston University spokesman Colin Riley told FoxNews.com. “These programs are helping students and others to sort through the results –it is more than how to deal with one’s feelings.”

Discussion and debate is certainly more in keeping with academic tradition than coloring books. But one BU student told FoxNews.com that a Nov. 9 email from the University, titled “Tips for engaging in self-care,” sent the wrong message.

“It is crazy that the school is handling the outcome of an election more than a serious terror attack,” the student told FoxNews.com. “We didn’t get a ‘self-care’ guide during any of them –not even after Paris last November while I was studying abroad.”

Cornell Psychology Professor Katherine Kinzler said not all students at the Ithaca, N.Y., Ivy League school are handling the prospect of President Trump like babies.

“My students tell me they are having conversations about their role as young adults in driving civic engagement, and the implications of the election for their nation and for their futures,”  Kinzler wrote in an email to FoxNews.com. “Students thinking through the issues and coming together can help us create productive solutions for the many critical problems of our times.”