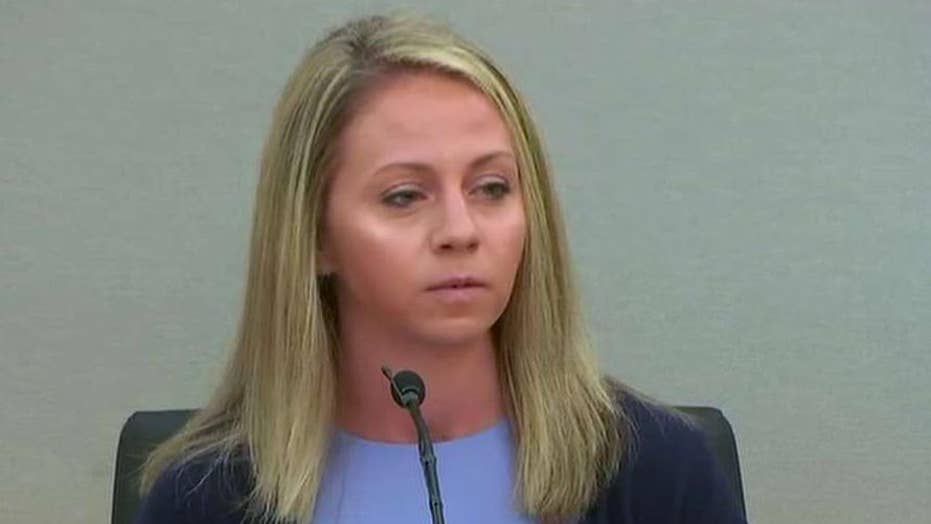 Amber Guyger is charged with fatally shooting her unarmed neighbor Botham Jean in his apartment; Casey Stegall reports from Dallas.

The case of Amber Guyger, the former police officer who shot and killed her neighbor, Botham Jean, in his own Dallas apartment after mistaking it for hers, is now in the hands of a jury.

The shooting has attracted intense national scrutiny not only for the strange circumstances surrounding it but also because it was one in a series of shootings of unarmed black men by white police officers. The incident led to widespread marches, protests and calls for Guyger to be held accountable for Jean's death.

Guyger, a four-year veteran of the Dallas Police Department, initially was charged with manslaughter for the Sept. 6, 2018 shooting. Two months later, a grand jury indicted her on a murder charge. She has pleaded not guilty.

Throughout the trial, Guyger's defense team has framed the shooting as a "tragic but innocent" mistake.

Legal analysts said that the trial's outcome could hinge on whether the jury would believe Guyger's account that she made a mistake and that the mistake was reasonable.

During closing arguments, prosecutor Jason Fine with the Dallas County District Attorney's Office slammed Guyger for changing her story on the witness stand. He said the case "has to do with [Guyger] making an unreasonable decision that put her in the [defense seat] and Bo in the ground."

He added: "This case is all about what is reasonable and what is absurd."

Fine also brought up witness credibility and told jurors they had a duty to look past Guyger's time on the police force and judge her like they would any other defendant. He then picked apart her testimony.

"She sat up there and told you two different stories," Fine said. "She couldn't even get her story straight."

Fine said Guyger first said that Jean was at the back door and that he was coming toward her and she had no choice but to shoot when he was 13 feet away. However, on redirect, she said he wasn't in front of her but over by the couch.

"She was caught in a lie," Fine said.

Last week, Guyger openly wept as she took the stand in her own defense after her attorney Toby Shook questioned her about the moments that led up to the shooting.

Guyger testified she was still wearing her police uniform but was off duty when she entered Jean's apartment and shot him twice.

Guyger, who had grown up in a suburb of Dallas, said she "never wanted to take an innocent person's life."

She also reenacted how she reached the apartment door she believed was hers, with her backpack, lunch box and police vest in her left hand and said she heard the sound of someone walking around inside. She testified that when she put the key into the lock she noticed the door was ajar. She then saw the silhouette of a figure and pulled out her gun and yelled, "Let me see your hands! Let me see your hands!"

Guyger said she saw the figure was moving and that Jean was yelling, "Hey! Hey! Hey!" in an "aggressive" voice. She pulled out her gun and fired.

Throughout the trial, jurors heard from officers who raced to the scene that night and who tried to resuscitate Jean. They also listened to testimony from neighbors and an investigator about how common it was for people to wind up on the wrong floor of the South Side Flats complex where Guyger and Jean lived. They also heard the 911 call Guyger made after she shot Jean where she was heard repeatedly saying, "I didn't mean to."

Prosecutors said Guyger was distracted by a sexually explicit conversation she was having with her partner on the police force. They said she missed a series of signs she wasn't on the right floor of her apartment, including a different colored doormat and lighted numbers.

If the jury finds her guilty of murder, Guyger could face life in prison.

If she is found not guilty of murder, she could still face lesser charges of manslaughter or criminally negligent homicide.