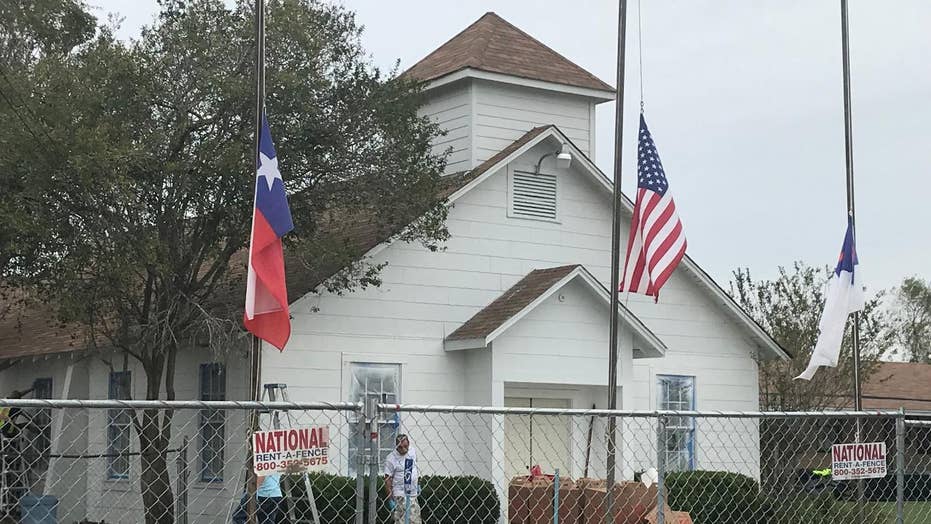 Authorities give Texas Baptist Church back to the people

Authorities have given the First Baptist Church of Sutherland Springs, Texas back to the people after four days of investigation.

After four days of investigation, authorities have given the First Baptist Church of Sutherland Springs back to the people. Since Sunday’s shooting in Texas, the blocks surrounding the church have been closed, and caution tape and state troopers have been keeping people away 24 hours a day.

There is still blood on the ceiling and bullet holes in some of the Bibles, according to a law enforcement officer.

Thursday afternoon, state troopers removed the caution tape and took down their mobile investigation unit. This allowed anyone to walk up next to the fence surrounding the church.

At first look, workers could be seen covering bullet holes in the siding that are still visible from the street, and repainting the exterior. They also cleaned the interior where 26 people, including a one year old and unborn baby were murdered last Sunday by a shooter.

The Southern Baptist Convention tells Fox News that Pastor Frank Pomeroy has expressed his desire to tear the church down. However, the Southern Baptist Convention said the pastor and his congregation would have the final say. Authorities have described the church as riddled with bullet holes and the pastor’s wife, Sherri, said it’s damaged beyond repair. But today, workers were making significant repairs.

The Pomeroy’s 14-year-old daughter Annabelle was killed in the massacre. Pastor Pomeroy told Fox News that he forgives the shooter.

“To be quite honest I’m more angry with the systems around than I am with the shooter,” said Pomeroy. “I have a feeling that maybe there’s systems around his life that allowed him to get to where he was.”

The residents of Sutherland Springs and the surrounding area have worked extraordinarily hard this week to keep praying and keep their faith. There have been multiple vigils where hundreds have prayed together.

“He was used by a dark power to accomplish something that was beyond him,” said Pomeroy.  “We need to stay strong to try to reach those others that may be in that same position before they are used by that dark power and can be used by God.”

There will be a church service Sunday morning at 11 a.m. at the Sutherland Springs Community Center. The services throughout the week, including one attended by Vice President Mike Pence, Attorney General Jeff Sessions, and Texas Governor Greg Abbott, have helped people stay positive.