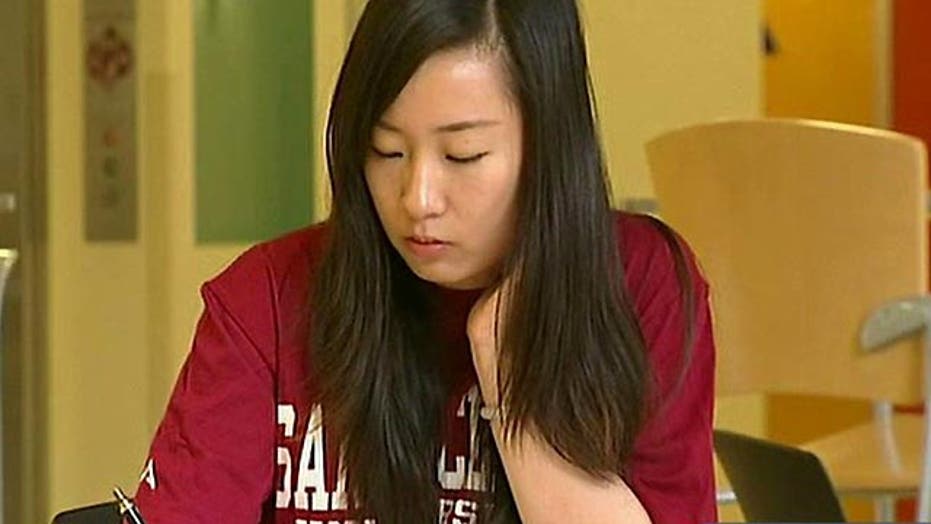 The influx is shown by the numbers: Of the almost 1 million student visas allowing foreigners to live in the U.S., approximately 360,000 are from China.

“Just walk downtown in Boston when college is in session, and most students you see are Asian,” a Boston-area mom who has two kids in Massachusetts colleges said. “I’m accepting of everyone, but it’s frustrating to see so many Chinese students being able to take of advantage our colleges, while our kids are at home wringing their hands over getting into college.”

So what is driving the Chinese influx? Money. Foreign students pay full tuition rates — which can be as much as double what American students would pay. Universities and colleges now roll out the red carpet for prospective Asian students, even hiring Chinese-speaking staff to recruit Chinese students and help them along the way once they're here.

Staff is hired to help Chinese students at writing centers, career services centers, and counseling centers, according to Inside Higher Ed. At the University of Illinois, pre-departure orientations are held in China, which necessitates hiring more Mandarin-speaking staff.

Are Chinese students more prepared by high-achieving cultural and family structures to academically wipe up the floor with their American contemporaries? Actually, no.

A professor of Chinese history said Chinese students are "woefully under-prepared. They have very little idea about what it means to be analytical about a text. They find it very difficult to fulfill basic requirements of analytical thinking or writing," this professor told The Wall Street Journal.

One Chinese student in a master's program at Harvard said, "A lot of Chinese students are struggling, and they stay rather isolated socially because the language dynamics are so hard. They look at this experience not as an educational journey, but as 'time served' — as long as they leave with an American diploma, they're happy."

Schools are finding they need to modify or even simplify coursework to adapt to both the language and learning barriers of Chinese students.

At Oregon State University, the school's accountancy Master of Business program now has more Chinese students enrolled than Americans. "Do I stick with the original learning objectives, or modify them?" senior professor Roger Graham Jr. told the Wall Street Journal of his classroom's make-up.

Evan Ryan, U.S. assistant secretary of state for educational and cultural affairs, attributed the huge increase to rising incomes in China, as well as the excellence of American education. "There's a growing [Chinese] middle class interested in their children's education," Ryan told Foreign Policy. "Globally, people think that you will get the best education here in the United States. The Chinese want to be competitive in the 21st century."

A senior counsel to the president of the Institute for International Education attributes the increase in Chinese undergraduates to the fast growth of international high schools in China. There, students work on their English and get ready to take U.S. assessment tests like the SAT and ACT.

"Rather than spending all their time preparing for Chinese tests," Rebecca Blumenthal told Foreign Policy, "they learn how to present themselves in ways which are much more helpful" for acceptance to American colleges and universities.

And Chinese students often have the money to burn when they arrive for advanced study. "While an American kid might drive a beat-up Toyota handed down from an older member of the family, Chinese students seem to have no problem affording a new Audi, BMW, or Lexus," Phyllis Schlafly wrote on Townhall.com.

So do Chinese students stay in the U.S. after graduation, applying their brand-new skills and knowledge toward making America stronger?

"It depends on the year," Joseph Wang, a Ph.D. in computational astrophysics noted on the website Quora.com when answering that question. "Before 2000, almost no one went back. Today I don't know of anyone that wants to stay in the United States."

"A lot has to do with the economy," he continued. "There are a lot of jobs in China, but the U.S. isn't hiring. Once people stop hiring, then you can't stay even if you wanted to."