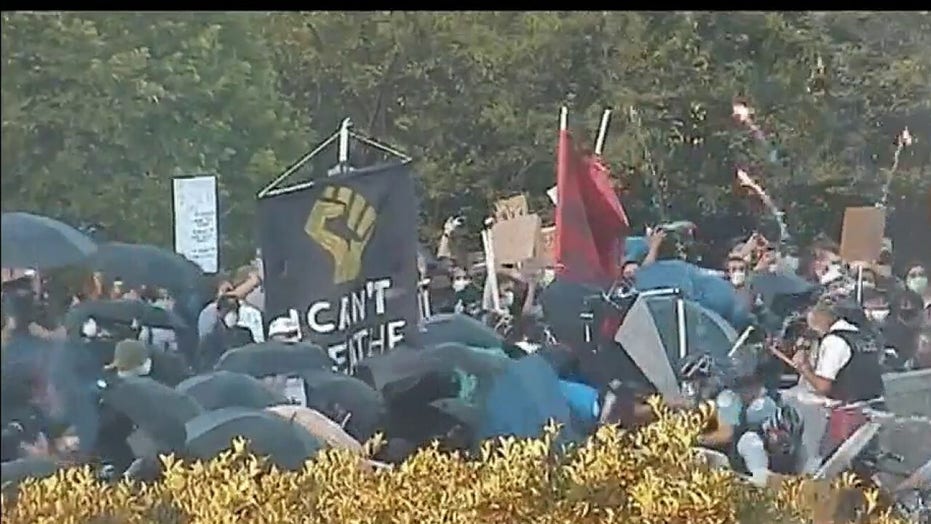 The brutal attack on police near the Christopher Columbus statue in Grant Park sent 18 officers to the hospital; Matt Finn reports from Chicago.

Chicago's top cop said his officers were ambushed during violent clashes between protesters and police last week near a statue of Christopher Columbus as objects were hurled at officers during heated confrontations between the groups.

Police Superintendent David Brown said his department has faced "organized actions to provoke violent responses from our officers" during a Monday news briefing where a video of Friday's events at Grant Park was released.

He said peaceful demonstrations spanning several weeks have been hijacked by what he called "organized mobs."

Officials said the six-minute compilation video released by the Chicago Police Department shows demonstrators dressed in black using umbrellas to shield themselves while hurling frozen water bottles and cans, rocks, explosives and other items at officers. In the video, many officers retreat behind the statue or hold up riot shields during the incident.

Protesters hid behind the umbrellas and banners to change into black clothing, police said. The footage also captures people distributing items to throw at police, while others used sharpened PVC pipe to stab officers, officials said.

Brown said 49 police officers were injured, including one with a broken eye socket and another who had a broken kneecap. Twelve people were arrested for mob action, damage to property and attacking police officers.

"We cannot be a city that thinks mob action of a crowd is acceptable behavior," Brown said, noting that when chaotic protests occur, the department is forced to divert manpower from policing high-crime areas.

The city reported 63 people shot and 12 killed over another violent weekend.

In response to Friday's events, Brown said he's ordered all officers to wear “any and all protective gear” when policing demonstrations. 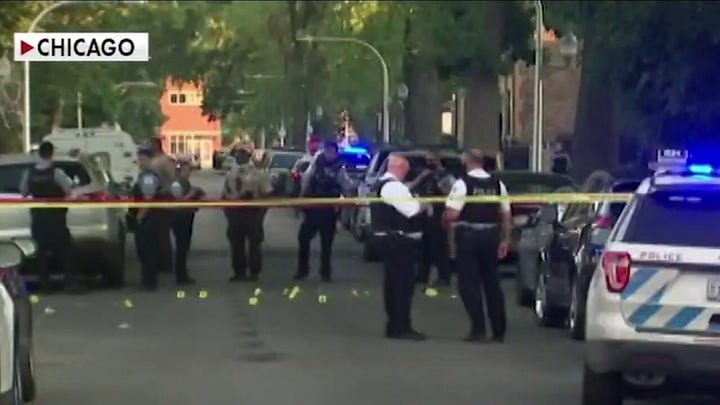 "We cannot assume that protests are going to be peaceful, based on these actions and others," he said.

“That’s not peaceful protest. That’s anarchy,” she said during a Monday groundbreaking of a restaurant. "We can’t have a circumstance where a small subset of that try to take over and hijack the peaceful protest and then turn it into a fight with the police.”

She also said she was not happy with images of injured protesters and reporters who were confronted by police officers.

Friday's protest was organized by Indigenous people in Chicago to call for the removal of the Columbus statue. Similar confrontations between authorities and demonstrators over memorials and monuments of controversial figures have occurred nationwide.

Miracle Boyd, an 18-year-old activist, said she lost some teeth after being punched by a police officer. Video of that incident was also circulating on Twitter.

“There is no way I should have left a protest bruised and battered for exercising my freedom of speech and freedom to assemble,” Boyd, an activist with GoodKids MadCity, said during a news briefing Monday morning. “I am disgusted and never would have ever thought I would become a victim to the biggest gang in America.”

On Sunday, the city's Civilian Office of Police Accountability said it received more than 20 complaints against police officers related to the protest.