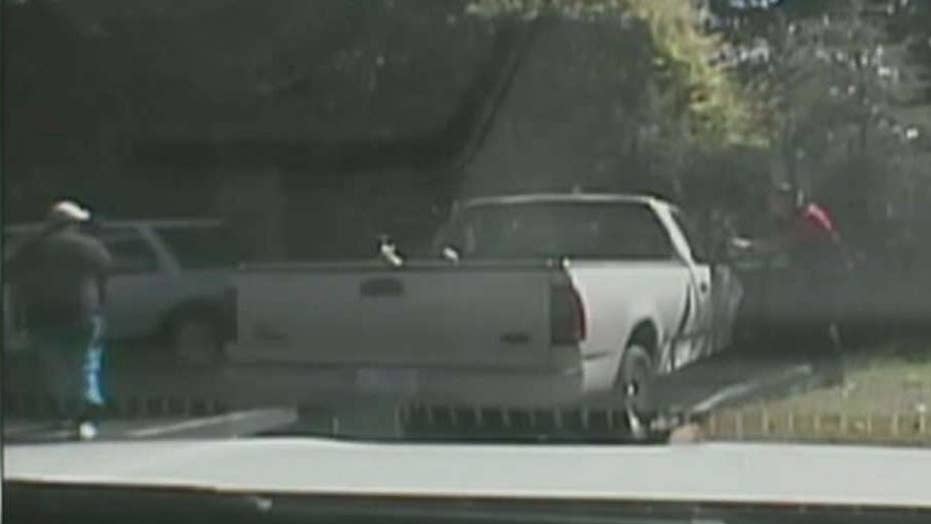 Charlotte police released Saturday dashboard and body camera footage of the shooting of Keith Lamont Scott, who was shot and killed by police.

The video shows officers surrounding Scott, who has his hands at his side, before shots are fired and he falls to the ground. It is not clear if there is anything in his hands as he backs away from his SUV before being shot.

The dash cam footage shows two officers pointing their weapons at Scott, who is inside the SUV. It is when he gets out and begins walking backwards when he is shot.

The body camera footage, meanwhile, shows officers with guns drawn and pointing their weapons at Scott. That footage does not show when shots are fired, and Scott is already on the ground.

Police also released photos showing what they say showed a handgun and marijuana that were in Scott's possession.

Charlotte-Mecklenburg Police Chief Kerr Putney announced ahead of the release that he had decided to release the footage as he was now confident it would not negatively impact the investigation into the shooting.

Scott's death Tuesday caused several days of protests that frequently morphed into riots, with demonstrators attacking reporters and bystanders, as well as looting businesses and smashing windows of buildings.

Putney said there was footage from the dashboard camera in one of the police cars, and at least one body camera. Scott's family has demanded the police release the footage after viewing it on Thursday.

Putney said the officers didn't break the law, but that the investigation by the state will continue. He said the officers "are absolutely not being charged by me." He added that Scott was "absolutely in possession of a handgun" and that officers saw marijuana in his car, which caused them to act.

North Carolina Gov. Pat McCrory welcomed the release, saying he had been assured that it would have no impact on the investigation.

"We have appreciated the ongoing dialogue and team work between state and city officials to seek public transparency while protecting the integrity of the investigation and the rights of all parties involved in this case," McCrory said in a statement.

Footage recorded by Scott's wife and released Friday by his family shows his wife repeatedly telling officers he is not armed and pleading with them not to shoot her husband as they shout at him to drop a gun.

The 2 ½-minute video released by the family does not show the shooting, though gunshots can be heard. In the video Scott's wife, Rakeyia Scott, tells officers that he has a traumatic brain injury. At one point, she tells her husband to get out of the car so police don't break the windows. She also tells him, "don't do it," but it's not clear exactly what she means.

As the encounter escalates, she repeatedly urges police, "You better not shoot him."

After the gunshots, Scott can be seen lying face-down on the ground while his wife says, "He better live." She continues recording and asks if an ambulance has been called. The officers stand over Scott. It's unclear if they are checking him for weapons or attempting to give first aid.

Charlotte is the latest U.S. city to be shaken by protests and recriminations over the death of a black man at the hands of police, a list that includes Baltimore, Milwaukee, Chicago, New York and Ferguson, Miss.