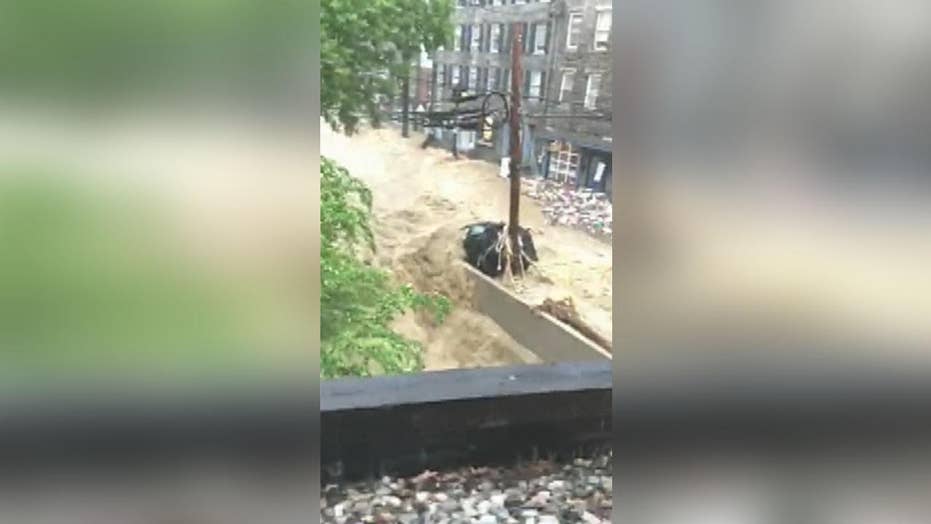 A state of emergency was declared in Maryland on Sunday as "catastrophic" flash floods and dramatic water rescues unfolded in and around Ellicott City amid heavy rains.

Gov. Larry Hogan announced the state of emergency on Twitter, and noted he directed the state's emergency management agency "to assist in any capacity possible."

The areas of Ellicott City and Catonsville, outside Baltimore, were experiencing "catastrophic flash flooding," with another forecasted surge of water "imminent," according to the National Weather Service (NWS).

Videos and photos posted to social media and shared with Fox 5 showed the city's Main Street — the same street devastated by flash flooding in July 2016 — inundated with severe floods as water rushed through the area. Floodwaters surged around cars and pickup trucks. The Howard County Fire & EMS agency tweeted that water was above the first floor of some buildings.

A flash flood warning was issued by the NWS on Sunday evening for Anne Arundel and Howard counties in central Maryland, which means "that flooding is imminent or occurring."

Some people who live in the area told The Baltimore Sun the flooding seemed worse than what they saw two years ago, when a storm killed two people and destroyed some local businesses.

Authorities said there were no immediate reports of fatalities or injuries, but information was still preliminary. Hogan tweeted that he's on location "surveying the damage."

State emergency officials warn that those in the Ellicott City area remains indoors and stay off the roads until the storm passes, and said to refrain from standing around the area to watch rescues.

"DO NOT stand and watch the water rescues - leave the area and do not put yourself in harms way," the Maryland Emergency Management Agency tweeted. "The teams are already out there helping others. PLEASE DO NOT be their next recovery they will have to make today."