A Baltimore woman spent nearly half her annual salary to keep her 17-year-old cat alive and purring, ultimately plunging $19,000 into a life-saving kidney transplant.

“I’m smart with money,” Boyd, 44, told the Baltimore Sun. “I’m very frugal. I drive a used car and wear clothing from consignment stores, and I have no debt at all. The message I’d like to get across is that if you save your money carefully, you can spend $19,000 on something that moves you.”

Nearly four months ago, Boyd decided to spend 41 percent of her annual salary on surgery for Stanley, who was diagnosed with renal insufficiency in November 2016.

Although both cats are doing well post-surgery, Boyd said she would have no regrets if her beloved feline were to tragically die tomorrow – even with the expensive price tag.

“He’s on immunosuppressant drugs, so he could get an infection,” she said. “Anything could happen. If Stan did pass away sooner rather than later, I’d know I had done what I could for him. We’ve already had a few really good weeks. He’s really happy, and that alone is worth the price.”

"If Stan did pass away sooner rather than later, I’d know I had done what I could for him."

Boyd, who is married and has young twin boys, works as a part-time member of the University of Baltimore’s creative writing faculty, earning about $46,000 a year. Her husband, Michael Yockel, supported his wife’s decision. He is a freelance journalist and stay-at-home dad.

So, Boyd explored her options and got in touch with her vet, who pointed her in the direction of a colleague at the University of Pennsylvania’s Ryan Veterinary Hospital in Philadelphia who does kidney transplants.

The surgery was performed Nov. 28, and before long Stanley was showing signs of his old self. Toward the end of May, Stanley will have reached the six-month post-surgical milestone, where his odds of long-term survival drastically improve. 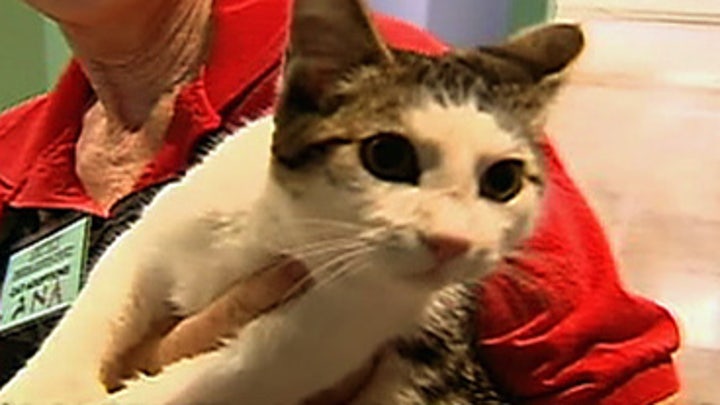 “I love all my cats, but Stanley is the only one who acts like a human being trapped in a cat’s body. He’s so vocal and communicative. He maintains eye contact better than any cat I’ve ever known. When I’m at work, he waits at the window or front door for me to come home, just like a dog.”

According to the ASPCA, indoor cats live on average between 13 and 17 years, but Boyd believes Stanley can live much longer.