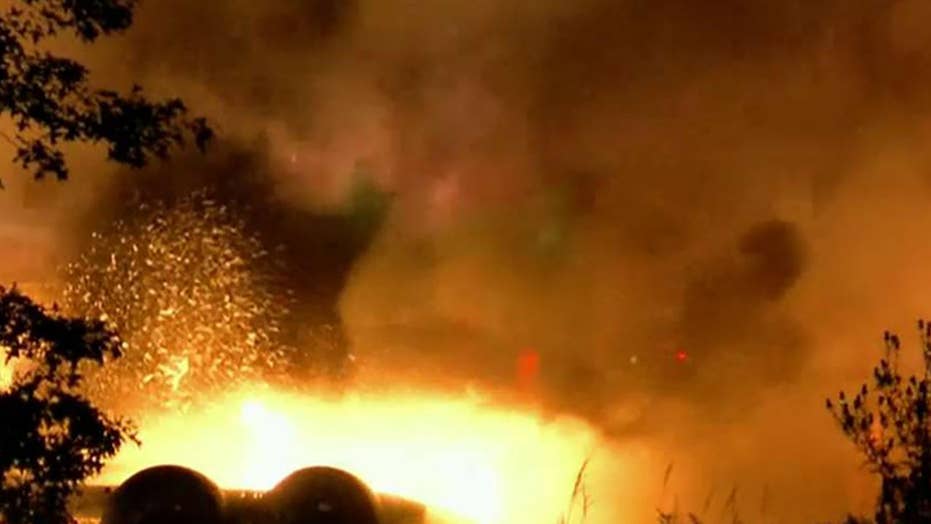 A plane crash lands and bursts into flames near the Toledo Express Airport.

Two people died early Wednesday when a cargo plane hauling auto parts crashed on approach to the Toledo Express Airport in Ohio, slamming into numerous unoccupied vehicles and sparking a "significant fire" that authorities spent most of the morning battling, officials said.

The fiery heap came to rest at about 2:37 a.m. in the deserted parking lot of a repair and towing company about a mile or two from the airport where it had been preparing to land, Joe Rotterdam, the manager of airport operations with the Lucas County Port Authority, said during a news conference.

The plane hit multiple unoccupied vehicles around the shop, which is within a half-mile from the Ohio Turnpike.

"The aircraft struck multiple unoccupied vehicles on the ground and a significant fire resulted from that impact," Rotterdam told reporters. "Because of those vehicles, there was a very significant fire."

The two people who died were aboard the Convair 440, Toledo-Lucas County Port Authority spokeswoman Kayla Lewandowski told the Associated Press. Rotterdam said officials couldn't yet confirm whether any distress call was made from the aircraft.

Port Authority officials said they believe the wrecked plane was carrying auto parts on an "unscheduled" cargo operation. Rotterdam added, however, that a lot of cargo flights at the airport are unscheduled.

The National Transportation Safety Board said on Twitter it was investigating the crash and that it involved a Convair 440 aircraft -- a turboprop plane.

The plane is believed to have originally traveled from Laredo, Texas, to Millington, Tenn., before making the flight to the Toledo area, WTOL reported. Flight records obtained by the television station show the aircraft was supposed to have landed at about the same time as the plane crash occurred.

Multiple agencies responded to the scene, with teams working to secure wreckage scattered over what officials described as a large debris field.

By mid-morning, no flames were visible as firefighters occasionally sprayed water on the smoldering wreckage, according to the AP. The debris appeared to be contained to the auto business, where at least one trailer was mangled and burned.

Rotterdam said it's not clear if there is a so-called black box with recorded data about the flight. No further details were immediately available about the people who died or the plane's owner.

The Federal Aviation Administration and the Ohio State Highway Patrol were helping with the investigation. The Toledo Express Airport remained open, and flights were not affected by the incident.