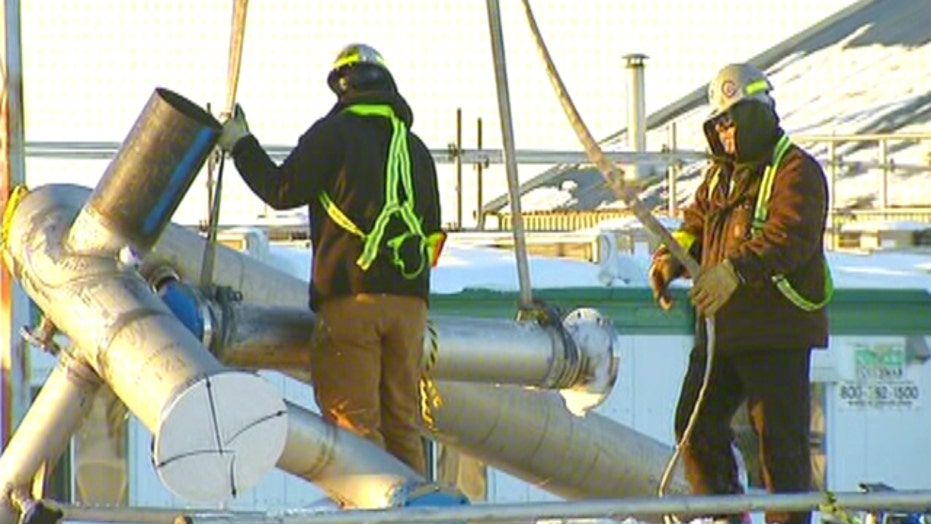 Some out-of-work Americans might have to look no further than our neighbor to the north for employment.

Canada is looking to hire tens of thousands of skilled workers for its booming energy industry. With the third-largest oil and gas reserves in the world, after Saudi Arabia and Venezuela, Canada wants to double its oil production in the next 10 years. While it has plenty of oil to tap, there aren't enough skilled workers to help secure it.

That's especially true in the western province of Alberta, where mining the oil sands and creating the infrastructure for it is providing plenty of work.

Ironworker Mike Riordan left  Minnesota for Alberta's capitol city of Edmonton - which serves as a staging ground for many of the big oil companies. Riordan says work was slow for him in the U.S. and he's now making twice what he was back home.

"The opportunities are just basically endless up here right now," said Riordan. "There's obviously a shortage of workers. You could go anywhere and make some pretty good money."

Ken Hughes, Alberta's minister of energy, said his province will need more than 100,000 workers in the next decade. Hughes added that moving to Canada can be an easy transition for Americans.

"Our cultures are similar, our standards are very similar, we have a lot of opportunity for people who want to work hard, who want to make some money, who want to continue to live in a society that is very similar to their own society,"  said Hughes in a recent interview with Fox News in Edmonton.

Construction company PCL is looking for iron workers, pipefitters and welders to name a few vocations.

"They can make some pretty good money. The average rate is about $40 an hour for a pipefitter here, so if you extrapolate that over a year, it's a 100-thousand or more, pretty darn good money," said Gary Trigg, vice president of fabrication with PCL.

" I think I'd be on the next plane or a bus or be hitchhiking or someway to get up here,  if you've got the skills."

And skills you need, as these aren't entry level positions.

"There is a severe demand for skilled workers, not entry level. Those skilled workers who have trade qualifications and probably have five to 10 or more years of experience, " said Abigail Fulton, vice president of the British Columbia Construction Association.  The organization represents some 2000 employers in industrial, commercial and institutional contractors.

The province of British Columbia needs some 40,000 workers. Qualified Canadians are getting the jobs, there just aren't enough of them.

"The more skilled workers we can put in place, the more journey persons we have on the site, the more entry level Canadians we can take on and provide apprenticeships and so forth,"  said  Fulton at a recent job fair her organization hosted with Riverside County near Palm Springs, California.

Both the British Columbia Construction Association and the Edmonton Economic Development plan to hold more job fairs in the U.S. in the new year. Applicants need to have experience and a clean criminal record.