The revelation this week that a Texas woman had falsely accused a state trooper of sexually assaulting her during a traffic stop is the latest of several in the last two years in which video footage was critical to clearing a police officer of alleged wrongdoing.

In this latest case, the woman, Sherita Dixon-Cole, had alleged that Officer Daniel Hubbard made sexual advances after she failed a field sobriety test. She went on to accuse Hubbard of assaulting her in his police car, and continuing to make advances, promising he'd release her from custody, on the drive to the police station.

“Officer Daniel Hubbard seems to comport himself professionally during the duration of the traffic stop and arrest and — without more -- should be cleared of any wrongdoing,” he said in a statement.

“It is deeply troubling when innocent parties are falsely accused, and I am truly sorry for any trouble these claims may have caused Officer Hubbard and his family. I take full responsibility for amplifying these claims to the point of national concern.”

Here are some other instances in which video footage contradicted accusations against officers:

-- The president of a South Carolina chapter of the NAACP accused an officer several weeks ago of profiling him during a stop. The chapter president, a pastor, alleged that the officer accused him of having drugs, asked him what he was doing in the neighborhood and threatened to put him in jail, according to The News & Observer in Raleigh.

The accuser, the Rev. Jerrod Moultrie, took to Facebook to say, "Tonight, I was racially profiled by Timmonsville Officer CAUSE I WAS DRIVING A MERCEDES BENZ AND GOING HOME IN A NICE NEIGHBORHOOD.”

But body camera footage showed no such comments were made, infuriating Timmonsville Police Chief Billy Brown, who told a local ABC station, "When I saw the video, I was shocked that someone who is supposed to be a community leader, a pastor and head of the NAACP would just come out and tell a blatant lie.”

“It bothered me,” Brown said. “It really bothered me, thinking about the racial unrest it could've cost in the community and it's just troubling to me that someone who held a position like that would come out and just tell a lie.”

--A Harker Heights, Texas, woman accused police of brutality and wrongful arrest after a New Year’s Eve party. But video and audio evidence indicated that the woman, Leah Dure, was injured before encountering Officer Joshua Wood through an altercation with her boyfriend, her boyfriend’s wife and others, reported KCENTV.com

Her attorney, Lee Merritt, then announced that he was no longer representing Dure.

"There is no factual basis to believe that Officer Joshua Wood committed an assault against Leah Dure," Merritt said in an updated statement.

Attorney Robert McCabe, who represents Officer Wood, denounced the false accusation, saying it inflamed racial tensions and hurt the cause of people with legitimate grievances against law enforcement.

--Last year, a Facebook post out of Alabama claimed that a police officer had beaten a man “half to death and pushed him off a bridge” after a traffic stop,  AL.com reported.

But a video released by police contradicted the allegations. The video, which was tracked down by the Rainbow City Police Department after the chief learned of the Facebook accusation, showed that officers were checking the name given by the man -- a passenger in the car -- and found it to be fraudulent. The police checked his real name, provided by the driver, and learned that his probation had been revoked over two felony warrants.

As they approached the man to question him about their findings, he took off, crossing two lanes of traffic and jumping off a bridge. The police used a stun gun when the man would not comply with their orders. The video, according to published reports, disproved the allegations against the police, showing that the use of the stun gun was the only contact authorities used throughout the episode.

--In 2016, a Georgia fire captain and fire department employee accused a police officer of being hostile and threatening during a traffic stop over an expired license tag. But a dashboard and body camera showed otherwise.

During the stop, DeKalb County Fire and Rescue Captain Terrell Davis threatened to call the county’s public safety director, Cedric Alexander. As the officer, Sgt. Stephen Floyd, wrote the ticket, another fire employee said the matter would be reported to Alexander. The employee, Krystal Cathcart, filed a complaint alleging that Floyd told her to keep quiet, using vulgarities and threatening to throw her in the “back of my squad car.” Davis supported her version of events, according to the local Fox affiliate.

Video footage showed no such exchange.

Davis was fired, but then was reinstated, according to the local Fox affiliate station. Last year, Cathcart pleaded guilty to one count of filing a false statement. She received a two-year probated sentence, and was ordered to complete 40 hours' community service, write two letters of apology and pay a $500 fine.

Video footage has also corroborated accusations of excessive force and other controversial actions.

Body camera video showed Milwaukee police earlier this year being confrontational toward Milwaukee Bucks rookie Sterling Brown, who was thrown to the ground and exposed to a stun gun over a parking violation, according to USA Today. 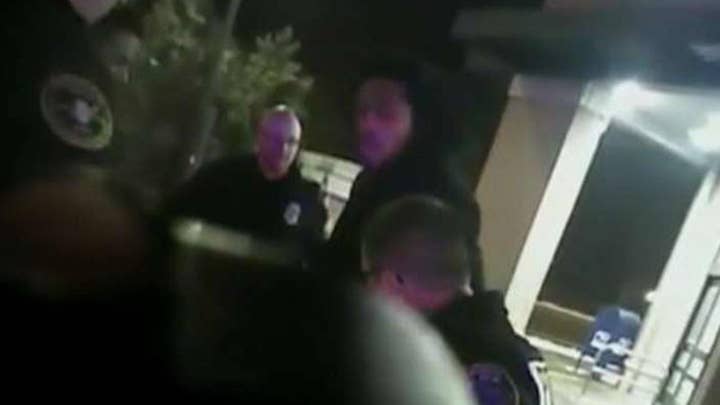 "I am sorry this incident escalated to this level," he said.

Brown is planning to file a civil rights lawsuit against the police.

"This experience with the Milwaukee Police Department has forced me to stand up and tell my story so that I can help prevent these injustices from happening in the future," he said.

"Black men shouldn't have to have their guard up and instantly be on the defensive when seeing a police officer, but it's our reality and a real problem," he continued. "There must be mutual respect, and both sides have to figure out how to accomplish this."