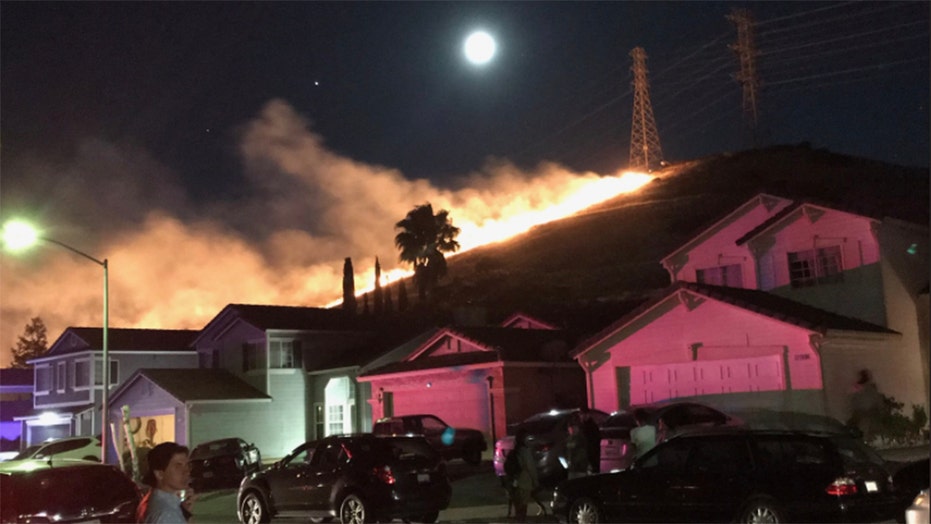 The night sky may have been ablaze with fireworks on the Fourth of July across Northern California, but fire crews were busy on the ground as dozens of fires were reported.

"In spite of dozens of structures threatened, not a single home was lost," the agency said.

A peak of new fires was reported in the 9 p.m. hour, when fire crews responded to 30 reported blazes.

Of the 67 blazes reported Saturday night, fire officials said 10 were structure fires, while 27 were vegetation and other exterior fires. Sixteen of the fires were caused by fireworks, according to fire crews.

Since all the professional fireworks shows were canceled due to the coronavirus pandemic, many took it upon themselves to launch their own.

“Since 6 o’clock, there’s been a steady stream of pops and booms within earshot of the incident command post. It just reminds us, it’s likely to be a very busy night,” Chief Lewis Broschard told KTVU.

HOT WEATHER FOR MUCH OF US, SEVERE THUNDERSTORMS TAKE AIM AT NORTHERN PLAINS

About 60 firefighters in the eastern part of the county were on hand to stop the flames that had consumed tens of acres by Saturday evening in unincorporated Brentwood. Initial reports indicated that fireworks were the suspected cause.

“Moments before that there was one that popped in Brentwood, again, caused by fireworks,” Steve Hill of ConFire told KTVU

Officials have been concerned about wildfires during a hot, dry period out West could get out of hand, threatening property and lives. Additional crews were brought in this weekend to prepare for an uptick in activity.

“We have, no exaggeration, a 400 percent increase in the amount of vegetation, grass fires that we’ve responded to since May 1st, as compared to last year,” Broschard said.

Fire officials said they were able to save over 20 homes near Pittsburg from a fire after getting help from partner agencies.

It wasn't just in the Bay Area that saw a surge in fireworks being launched into the night skies on Saturday. The Los Angeles Police Department reported receiving more than 1,000 illegal fireworks complaints.

In one case, one fire destroyed eight apartments and injured five tenants.

The wildfire danger continues out West on Monday, as daytime highs in the 90s and 100s with dry and windy conditions bring an elevated risk of wildfires.

The danger for wildfires returns on Monday across the West. (Fox News)

Red flag warnings for wildfires have been issued and spread across Northern California, Utah, Nevada and western Colorado.