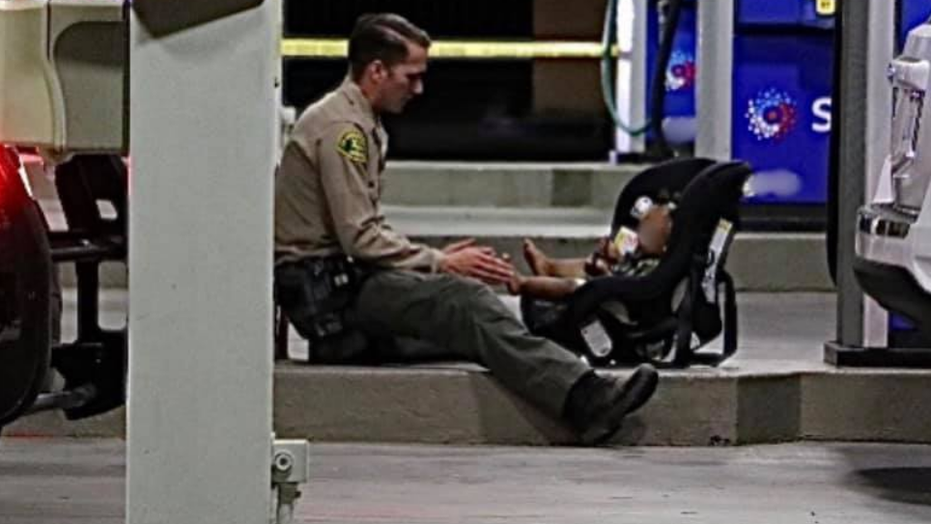 Three suspects were arrested for attempted murder on Wednesday after a woman was shot multiple times at a gas station in California, as an infant sat in the back seat, police said.

The woman, described as a 20 to 30-year-old Black female, was taken to the hospital in critical condition with several gunshot wounds. The baby was unharmed. The Lancaster Sheriff's Station posted a picture showing Deputy Josef Schirmeister sitting next to the child at the gas station to comfort and distract him.

"Deputy Josef Schirmeister is part of the community in/out of uniform," said Los Angeles County Sheriff Alex Villanueva. "Thank you Josef for comforting this precious 1-year-old baby boy caught in the middle of a violent act that has left his mother in critical condition."

Deputies responded to a Lancaster Mobil gas station around 1 a.m. on Wednesday to find a woman sitting in the driver's side of a vehicle suffering from gunshot wounds to the upper body. A preliminary investigation found that the woman was the victim of a robbery, police said.

Police told Fox 11's Bill Melugin that the victim arrived at the gas station with a female passenger who set her up.

The suspects were described as two Black males and one Black female, all in their 20s. Their names have yet to be released by authorities.

They were arrested for attempted murder and evidence of the crime was seized during a following up investigation, police said. It's not clear if the victim was the baby's mother. The child has since been returned to his father, according to Melugin.