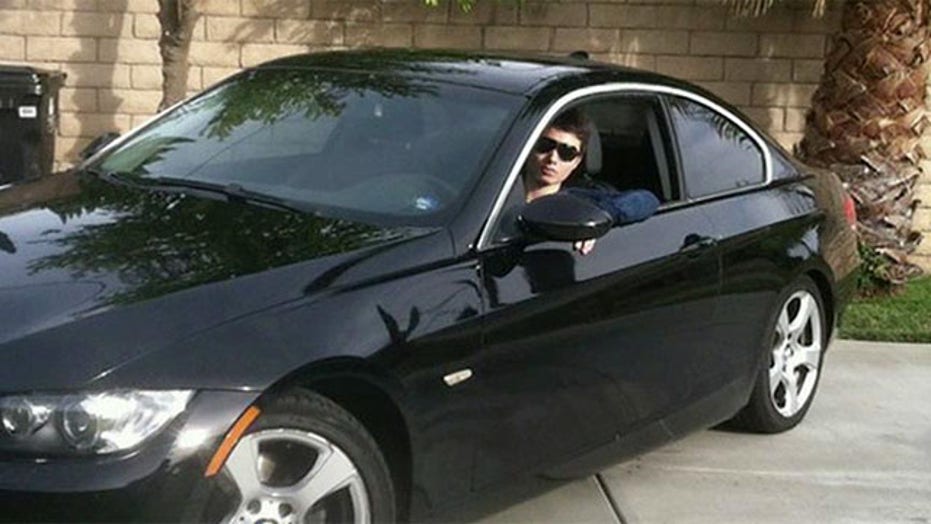 A seven-minute video posted by the suspect in a California rampage was the last of a series of posts on YouTube and elsewhere leading up to the shooting.

"Tomorrow is the day of retribution," Elliot Rodger, 22, said in a video taken down by YouTube on Saturday. "The day in which I will have my revenge against humanity -- against all of you."

An attorney for Rodger's father, "The Hunger Games" film assistant director Peter Rodger, said Saturday that the 22-year-old's family called police several weeks ago after being alarmed by YouTube videos "regarding suicide and the killing of people."

While videos re-uploaded by Rodger to YouTube don't make specific threats like his final "Retribution" video, the posts and other comments reveal jealousy, sexual frustration and narcissism.

Here's a timeline of key events leading up to the Friday night shooting, as revealed through Rodger's online posts:

ONE YEAR AGO -- Rodger begins revealing his views on women, dating and his own life in comments on several YouTube videos. One video shows students partying in Isla Vista during Deltopia, a notorious all-day party in Isla Vista that recently drew attention after devolving into clashes between police and some revelers. "It angers me so much to see these people having so much fun here. I've lived here for over a year now, and it's been such a miserable experience. I haven't been invited to a single party and all the girls ignore me when I walk around at night."

DEC. 2, 2013 -- Rodger posts a photo to Facebook and Google Plus, sitting with sunglasses inside a black BMW with a license plate that would eventually match the car involved in the shooting.

FEB. 10 -- Rodger uploads the first of at least 22 videos to YouTube, titled "Enjoying the sunset in Santa Barbara." Rodger doesn't speak during the nearly 2-minute video filmed from a car, showing the sun setting over the water as Belinda Carlisle's "Heaven is a Place on Earth" blares from the speakers. Most of Rodger's videos are similar, filmed from a car with no words, but driving.

APRIL 5 -- Rodger posts a hand-held, portrait-framed video titled "Throwback: July 4th 2011" that shows people sitting around a table outdoors at a party with beers and a live band. Rodger doesn't appear or speak.

APRIL 8 -- Rodger posts a picture on Facebook with his father, who was an assistant director for "The Hunger Games," and a child sitting between them on an outdoors bench.

APRIL 20 -- Rodger tweets a link to a video later taken down from his YouTube channel titled "Why do girls hate me so much?" A video with the same title is re-uploaded Friday, May 23, the day of the killings. "I don't know why you girls are so repulsed by me. It doesn't make sense," Rodger said. "I do everything I can to appear attractive to you. I dress nice, I'm sophisticated. I'm magnificent. I have a nice car, a BMW. Well, it's nicer than 90 percent of the people in my college."

APRIL 24 -- Rodger wakes up with a cold and decides to postpone his plan to May 24.

APRIL 30 -- Authorities do a well-being check on Rodger after his family calls police about his YouTube videos. Rodger says in his manifesto that he tactfully tells them the videos were a misunderstanding. "If they had demanded to search my room... That would have ended everything. For a few horrible seconds I thought it was all over."

MAY 20 -- Rodger posts a 59-second video that shows his face as he drives around wearing sunglasses and a collared shirt, playing George Michael's 1988 hit "Father Figure." Rodger does not speak, but the description of the video says: "I'm awesome. Yeah, you better believe it. F--- you haters."

MAY 23 -- Rodger posts several more videos to YouTube, including his detailed plan titled "Elliot Rodger's Retribution." "All you popular kids, you've never accepted me, now you'll all pay for it," Rodger said.

Rodger stabbed three people to death at his apartment before shooting to death three more in a terrorizing crime spree through the college neighborhood of Isla Vista, sheriff's officials said.