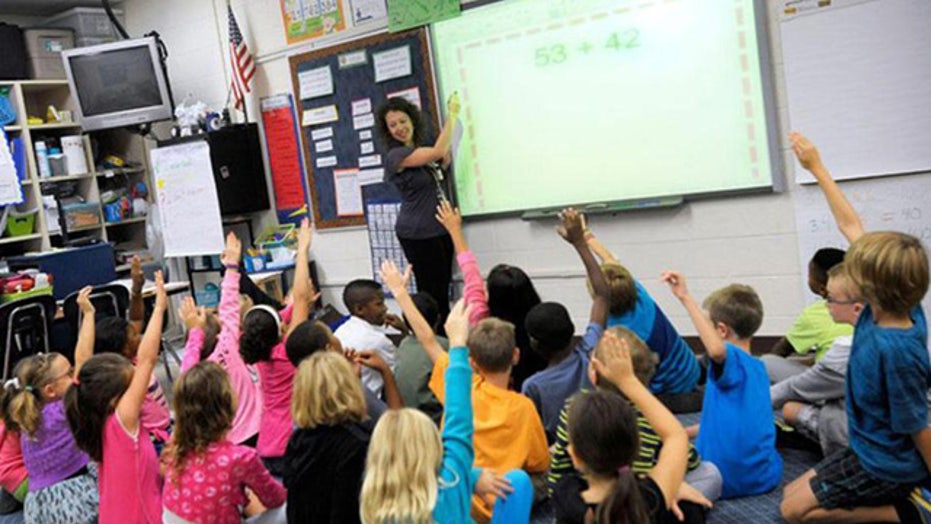 Pros and cons of Common Core

A California high school where a majority of juniors opted out of Common Core testing has backed off of plans to ban the students from using the school's parking lot and from taking part in senior class activities after parents and education groups raised a fuss.

C.J. Foss, principal of Calabasas High School in Los Angeles County, last week sent an email to seniors-to-be announcing that certain privileges would be withheld from students who skipped the controversial test, which detractors say is an attempt to nationalize America's public education system. Although the test, which critics say dictates curriculum, is widely known as Common Core, some states have different names for it. In the Golden State, the test is known as the California Assessment of Student Performance and Progress.

“Senior Activities, Parking, and Off-Campus passes require students to have participated in the CAASP testing (Seniors only), and to have cleared their Service Learning hours from prior years,” read the email sent by Foss.

“It is alarming that a principal would attempt to condition important benefits such as parking passes and participation in senior activities on the surrender of educational rights.”

Under state law, students are permitted to opt out of the test, prompting the Pacific Justice Institute, an education advocacy group, to charge Foss was punishing students for exercising their rights.

“It is alarming that a principal would attempt to condition important benefits -- such as parking passes and participation in senior activities -- on the surrender of educational rights,” Matthew McReynolds, senior staff attorney for the institute, told FoxNews.com. “None of our rights are safe if a government official can punish us for exercising those rights.”

The Institute, which claims 75 percent of the class opted out of the test, fired back at Foss in a letter threatening a lawsuit.

“No school district is a law unto itself,” McReynolds said.  “We are taking action to ensure that important laws such as parental opt-out rights continue to serve as checks and balances and do not become empty promises.”

When asked if the policy would be permanently changed, Foss said that it would have to be decided at a later date.

“We will have to work with our district office to determine the answer to that question.”

The California case was not the first time a school was accused of trying to punish students for opting out of the standardized test. Last week, FoxNews.com reported on a 9-year-old student in New Jersey who was barred from attending an end-of-year school event because she opted-out of that state's version of Common Core testing.

Michele Thornton, of Oldmans Township, said school officials would not let her daughter Cassidy participate in an “Untest Afternoon” party, saying that the bash was only for students who took the Partnership for Assessment of Readiness for College and Careers (PARCC) exams. Thornton feels especially bad because it was she who told the girl not to take the controversial test.

“They weren't sure where they were going to put my daughter, so I told them that I would just pick her up early from school," Thornton said. "When I went in to pick her up there were two gaming trucks, an outdoor play area (soccer and volleyball), cupcakes, juice boxes, and buckets full of prizes for the kids.”