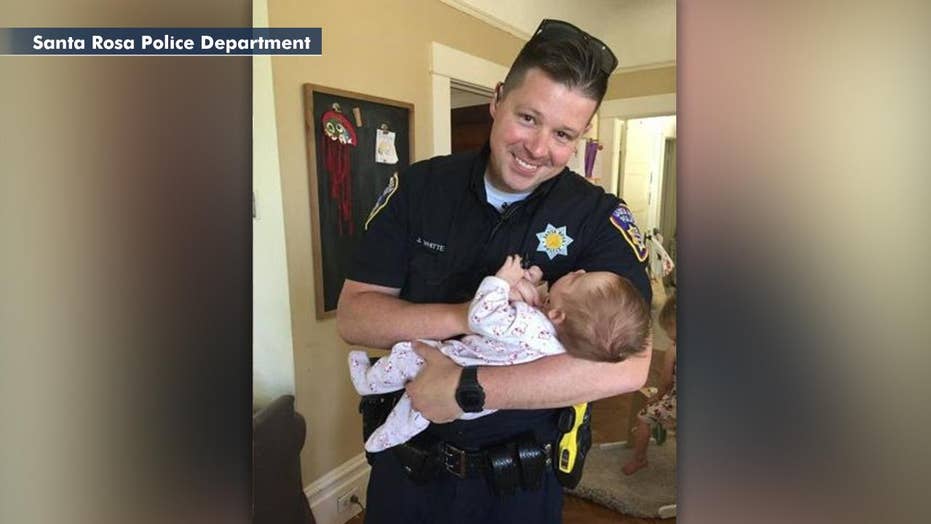 California couple adopts baby from homeless woman the officer met while on patrol.

A California police officer’s life changed after he met a homeless, pregnant woman who asked for his help.

Santa Rosa Police Officer Jason Whitten, 33, responded to the call from a woman who said she needed a home for her unborn baby. The baby's father told “Good Morning America” the woman was suffering from drug addiction.

"Like a lot of people I've talked to, I heard about her life and her story," he said. "I knew her [other] two children from the camp I had worked at for foster youth. When she started talking about them, I had an immediate connection with her just by knowing who her wonderful children were."

GEORGIA OFFICER WOUNDED IN WALMART SHOOTOUT IN SERIOUS CONDITION, MOUTHED TO HIS WIFE: ‘I LOVE YOU’

The officer said he drove the pregnant woman to a rehab facility. The woman asked Whitten if he wanted to adopt her baby, but he said wasn’t sure if she was serious. In February, the woman gave birth but couldn’t get clean. The baby girl had heroin in her system when she was born, and the county asked the woman if she wanted to place her daughter in foster care. She told officials to contact Whitten.

"She said: 'I knew you had daughters. I knew you were firm, but you were fair,'" Whitten recalled. "She had this vision of her daughters playing in tutus with her sisters. That's what she said she wanted."

On Aug. 30, the Whitten family adopted the baby girl and named her Harlow Maisey Whitten. The little girl now has three older sisters.

"I fell in love right away," Whitten said. "She's so adorable. She will cry if she needs something, obviously as babies do, but as soon as we would touch her, she'd immediately stop crying. She knew right away that she was safe."

“Congratulations, Whitten family, and welcome, baby, to the SRPD family!” the post read.