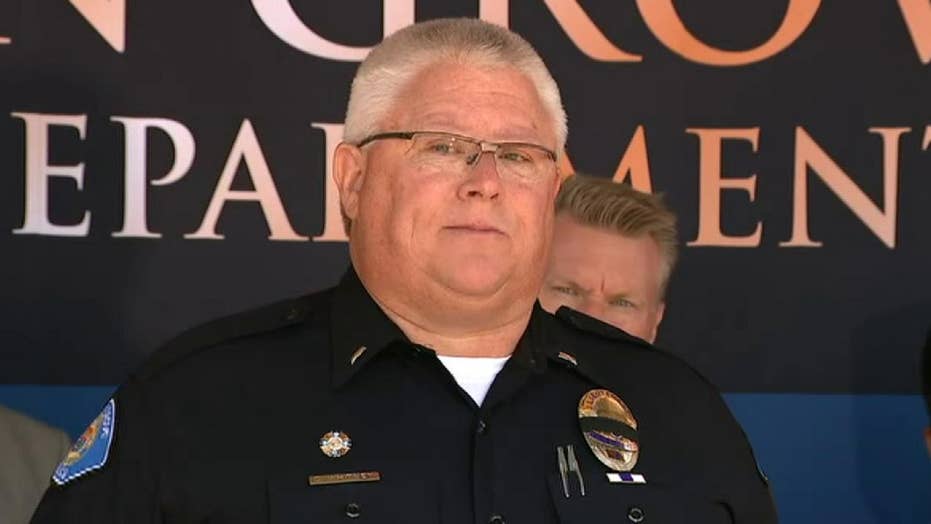 The police updated the press on the investigation into a stabbing spree that left four people dead and two others injured.

A “documented gang member,” who police said "should have been in prison," was responsible for a two-hour stabbing and robbery rampage in Southern California that killed four people and injured two, authorities said Thursday.

Garden Grove Police Chief Tom DaRé told reporters that Zachary Castaneda "could have injured or killed many other people" had he not been apprehended as he walked out of a convenience store in the neighboring city of Santa Ana, dropping a knife and a gun he had taken from a security guard he had just killed.

Police told reporters the violence appeared to be “random," with Garden Grove police Lt. Carl Whitney adding that Castaneda was "violent" with detectives who attempted to interview him Wednesday night and was kept in restraints.

"He never told us why he did this," Whitney said.

The night before he told reporters, "We know this guy was full of anger."

Police work the scene of a stabbing in Santa Ana, Calif., Wednesday, Aug. 7, 2019. A man killed multiple people and wounded others in a string of robberies and stabbings in California's Orange County before he was arrested, police said Wednesday.  (AP Photo/Alex Gallardo)

Police said the violence unfolded across eight crime scenes in Garden Grove and Santa Ana, including an apartment complex, a bakery, an insurance office, a gas station and a Subway restaurant. The attacker and four of his alleged victims were described as Hispanic, the other two were described as Caucasian.

Castaneda has a conviction for possession of meth for sale while armed with an assault rifle, police said, adding that investigators were still putting together his entire criminal history. Officials didn't specify what crimes sent Castaneda to prison or when he was released, but the chief described the suspect as a "violent individual," who should "never have been considered for early release" from prison.

“Based upon his prior arrest record, he is a violent individual who should have never been considered for early release based upon Assembly Bill 109.”

The bill, enacted in 2011, was designed to transfer people convicted of certain classes of less serious felonies from state prison to local county jails.

DaRé went on to say, “As a police chief I implore our policymakers to reevaluate their policies on criminal justice.”

DaRé said California law enforcement agencies have been “crippled” by Assembly Bill 109 and “offenders are not being held accountable for their crimes.”

Fox News has reviewed Castaneda’s court records in Orange County and discovered he has a long criminal history dating back to 2004, which includes convictions for child abuse, battery, car theft and prior drug offenses.

He was also accused of assault and battery last year, but pleaded not guilty. It was not clear if or how that case was resolved.

In June of this year Castaneda was charged with eight counts of vandalism on behalf of a criminal street gang but pleaded not guilty.

Whitney told reporters on Thursday that police had previously gone to Castaneda's Garden Grove apartment to deal with a child custody issue. The suspect's mother had been living with him and had once asked police how she could evict her son, he said.

Whitney said Castaneda stabbed two men to death during a confrontation after he allegedly burglarized their apartment. Police said Castaneda lives in the same Garden Grove apartment complex as his stabbing victims.

One of the victims at the apartment was identified by police as Romanian immigrant Helmuth Hauprich, 62. Hauprich's son, Erwin, told The Associated Press that his father had called him and said his passport, green card, sword collection and even a dining table were taken from the apartment.

Erwin Hauprich said his father never called him back and he went to check on him after hearing there had been a stabbing at the complex.

A police officer told him that Helmuth Hauprich had been taken to the hospital, where he died, the son said. He said he was told his father's 63-year-old roommate, who has not yet been identified, was killed in the apartment.

Whitney told reporters a bakery also was robbed where Castaneda allegedly threatened a clerk with either a gun or a knife and took cash.

The bakery owner, Dona Beltran, said she was sitting in her car charging her cellphone when she saw a tattooed man get out of a Mercedes and go inside the business. Beltran, 45, followed him inside to offer help but kept quiet when she saw him trying to open the cash register.

She then ran out of the shop and yelled she was being robbed before taking refuge in a nearby dental office, she said. He ended up taking the entire register with him, which had about $200, she said.

"I saved myself because I was in the car," she said in Spanish on Thursday. "Thank God I am alive."

Dona Beltran, owner of M Bakery is seen behind her bakery counter in Garden Grove, Calif., Thursday, Aug. 8, 2019. She said the suspect came in late Wednesday afternoon and took the entire cash register. She said she ran to a nearby dental office to safety when she saw she was being robbed.  (AP Photo/Amy Taxin)

"She fought as best she could," said the lieutenant, who added that Castaneda was armed with “some sort of machete knives” when he confronted the woman and got away with cash.

He then went to a check-cashing business next door, according to Whitney, where an employee “threw cash at the suspect.” He then took off again.

Police said shortly after 6 p.m. on Wednesday, Castaneda drove up to a Chevron gas station, where he attacked a 44-year-old man pumping gas “for no reason.”

“There was no robbery,” said Whitney, who added that the victim was stabbed in the back and “his nose was nearly severed off his face,”

Whitney said undercover detectives tracked Castaneda’s silver Mercedes to the parking lot of the 7-Eleven in Santa Ana and within a minute of their arrival, the suspect, who police said was covered in blood, walked out of the store, carrying a large knife and a gun that he had cut from the belt of a security guard he allegedly stabbed to death shortly before.

Police ordered Castaneda to drop his weapons and he complied.

The Orange County coroner's office identified the security guard who was stabbed to death at the 7-Eleven as 58-year-old Robert Parker of Orange, which is about 20 minutes from Garden Grove.

Whitney told reporters after Castaneda was taken into custody police learned that a man who was about to enter a nearby Subway restaurant also had been fatally stabbed during a robbery.

Pascual Rioja Lorenzo, 39, of Garden Grove worked at the Subway and has been identified as the man who was fatally stabbed during the robbery, according to the Orange County Sheriff's Office.

Whitney said surveillance cameras caught some of the attacks.

Charges have not yet been filed. Police said they are still processing evidence from the eight different crime scenes and once they reviewed all the evidence the district attorney’s office will file charges.

Castaneda is scheduled to be arraigned on Friday.