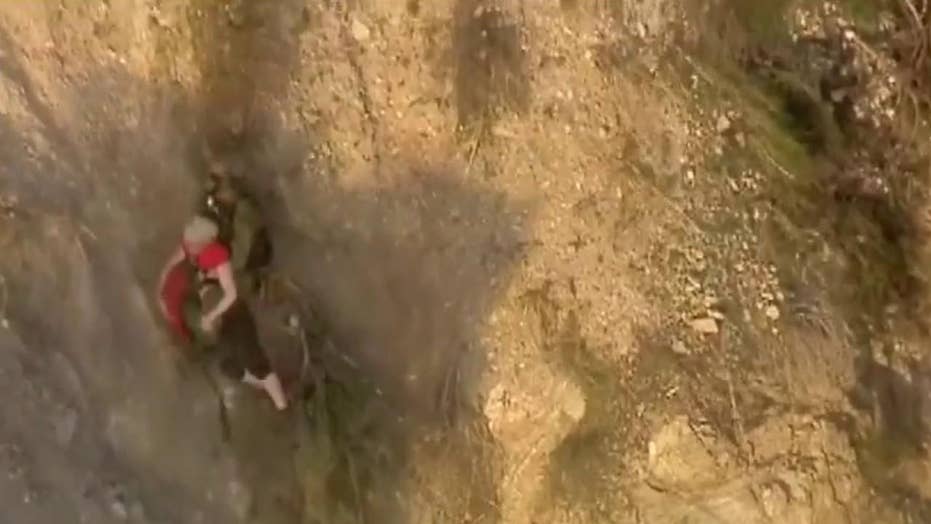 A hiker’s nail-biting rescue from a California mountain on Saturday was captured on video after she slipped off the trail and clung to tree roots sprouting from the steep cliffside.

Firefighters and paramedics responded to Rubio Canyon in Altadena, located just four miles north of Pasadena, where a couple had been hiking when the woman fell over a cliff.

CALIFORNIA HIKER, 17, SURVIVES BEING STRANDED FOR 30 HOURS IN SNOWY UTAH MOUNTAINS: 'I SHOULDN'T EVEN BE ALIVE'

A helicopter was called in and lowered a paramedic from Air Rescue 5 to a spot below where the woman was grasping the sparse vegetation, FOX11 Los Angeles reported.

Once the rescuer was in place, aerial video shows the hiker letting go of the roots and sliding down the mountainside on her belly before the paramedic catches her. The helicopter then airlifts them back onto the trail.

It was unclear how long the woman was holding onto the roots before the helicopter arrived.

The hiker, who was not publicly identified, appeared to only have minor scrapes and refused medical attention, the station reported. The hiker and her husband were seen hugging rescuers and taking photos after the incident.