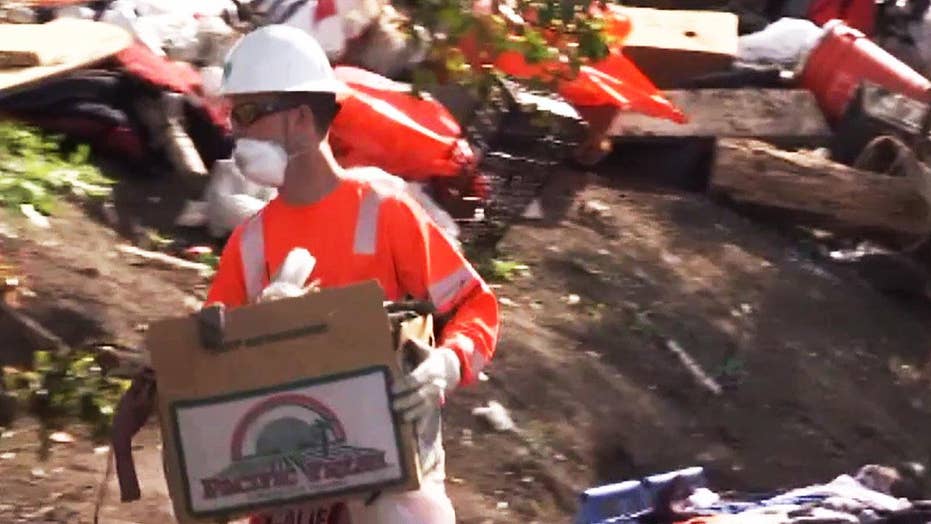 As California's homeless population skyrockets, the cost of cleaning up the state's numerous shanty towns is also hitting record highs -- and the price tag is likely to keep rising as workers tasked with tossing the vagrants' syringes, feces and buckets of urine fight for safer conditions.

The Golden State's homeless population of more than 130,000 people is now about 25 percent of the nationwide total, and cleaning up after the surging group is getting costly -- topping $10 million in 2016-17. But the human cost is getting equally untenable, a workers' advocate says.

In an official grievance filed last week, the union representing California's maintenance workers accused the state of subjecting its members to hazardous conditions without proper training or equipment.

"It is the Union's contention that Caltrans is not ensuring that our members are being provided the appropriate Personal Protective Equipment (PPE), necessary training, necessary vaccinations and proper compensation for the dangerous hazmat duties they are performing when cleaning up homeless encampments on State Caltrans property," International Union of Operating Engineers director Steve Crouch said in the complaint.

Crouch told KTVU on Monday that maintenance crews often have to work in areas where the ground is muddy, slippery and ridden with debris that can include objects that are exceedingly sharp. Other items are simply dangerous to touch, such as potentially toxic or biologically unsafe materials.

Workers come across needles, buckets full of feces and other debris while cleaning up encampments. (KTVU)

"Feces and urine and feminine products and all kinds of things on the ground; needles, syringes, you know they use buckets, five-gallon buckets for toilets and it gets really disgusting,"  he said.

Besides the prospect of touching dangerous material, workers are also confronted with the open hostility from the "residents" of the encampments they are trying to clear.

In an interview with the Sacramento Bee, one Caltrans worker who asked not to be named due to fear of retribution said he's been involved in six cleanups so far this year but only been given a pair of gloves as protection.

The department told KTVU in a statement that, "Safety is a top priority for Caltrans and we will carefully review the grievance."

The surge of homelessness in the Golden State is also costing the state tens of millions of taxpayer dollars. Caltrans said in its Mile Marker magazine the department has spent about $29.2 million in cleaning up encampments since fiscal year 2012-13.

A large homeless encampment along the Santa Ana River Trail in Anaheim. (Reuters)

In the past year alone, Caltrans estimated the cleanup costs in 2016-17 topped $10 million, a 34 percent increase over the previous year across all 12 regional districts. Maintenance crews encountered about 7,000 homeless camps on rights of way of the state's 254 highways.

California's homeless population ticked up by 13.7 percent to 134,278 people in the past year, about 25 percent of the national total, according to a U.S Department of Housing and Urban Development report.

HOMELESS MAY GET MOBILE SHOWERS AT LOS ANGELES METRO STATIONS

"Homelessness is a problem throughout the country, but is more visible in California where HUD reported 68.2 percent of the homeless population lives in unsheltered locations such as streets and parks," Caltrans said in its report. "That is the highest percentage in the country."

A typical camp cleanup takes days to complete, according to the agency, with a notification first posted at the site at least 72 hours before crews arrive.

Crouch said Monday he hopes his grievance causes the department to focus on keeping the transportation system moving.