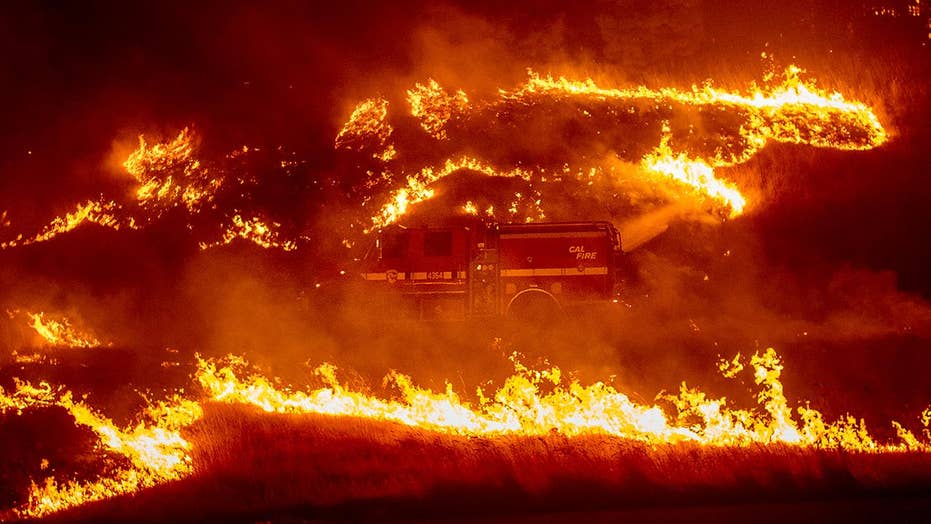 Delta Fire shuts down I-5 in California

16 new fires are burning in northern California. William La Jeunesse has the story.

More than 1.2 million acres of California land were charred and over 1,200 homes destroyed in this year’s prolonged fire season that has seen some of the largest wildfires in that state’s history.

This summer, more than a dozen fires burned at the same time throughout California, and the next month could see more fire activity as dried-out grass and Santa Ana winds potentially aggravate any fire that starts, the Los Angeles Times reported.

In Northern California, the Delta fire -- which forced the closure of a stretch of Interstate 5, which runs the length of the state -- had consumed nearly 37,000 acres as of Saturday, the newspaper reported. But the interstate was expected to open Sunday.

Jessica Gardetto, a spokeswoman for the National Interagency Fire Center, told the newspaper that wildfires are likely to grow and become more difficult to contain.

“It’s fairly common to have California experience this level of fire activity in the fall, but it’s not usually the entire state,” she said.

Firefighters have expressed concern over fires, which have become more intense and less predictable, and the longer fire season. The season is about 72 days longer than it was three decades ago, according to California Department of Forestry and Fire Protection.

“It’s a marathon that just keeps getting longer and longer,” said J Olsen, a firefighter with Central Calaveras Fire and Rescue who worked the Mendocino Complex fire. “Every season I go into it thinking it’s going to be the worst season we’ve seen yet.”

California accounts for 10 percent of all the acreage burned in the U.S. since 2000, according to the National Interagency Fire Center.

The northern and southern parts of the state have seen multiple wildfires in recent weeks, prompting thousands of residents in cities and rural areas to evacuate.

Most are either fully contained or close to containment.

The most recent wildfire, the Kerlin fire, began Tuesday and has so far burned 1,200 acres in the northern part of the state.

The Mendocino Complex fire burned over 459,000 acres and is the largest wildfire in the modern California history. An estimated 157 homes and 123 buildings were destroyed.

For more than a month this summer, the Ferguson fire burned in rugged terrain and shut down the Yosemite Valley down for three weeks. Two firefighters were killed battling the blaze.

At least 12 homes were destroyed as a result of the Holy fire near the Cleveland National Forest in August.