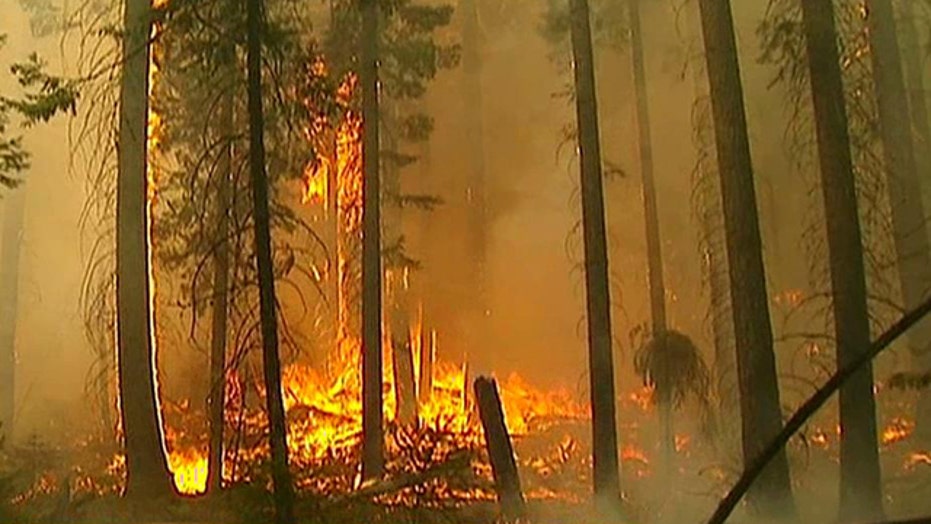 Fire commanders battling a giant blaze around Yosemite National Park said Thursday that they would maintain use of a Predator drone to give them early views of any new flare-ups across the remote and rugged landscape..

Officials remained confident on Thursday about their efforts to corral the Rim Fire, which grew by a relatively modest few hundred acres overnight.

The fire had burned about 301 square miles as of Thursday morning and remained 30 percent contained. It has cost $39 million to fight.

"We remain very optimistic that our containment lines are holding, and we'll continue to strengthen lines around communities that are threatened around the fire," said California fire spokesman Daniel Berlant.

Fire officials said they expect to fully surround the blaze in three weeks, although it will burn for much longer than that.

The drone is being flown by the 163rd Wing of the California National Guard at March Air Reserve Base in Riverside and is operating from Victorville Airport, both in Southern California. It generally flew over unpopulated areas on its 300-mile flight to the Rim Fire. Outside the fire area it will be escorted by a manned aircraft.

While unmanned aircraft have mapped past fires, use of the Predator will be the longest sustained mission by a drone in California to broadcast information to firefighters in real time.

Officials were careful to point out the images are being used only to aid in the effort to contain the fire.

The plane, the size of a small Cessna, will remain over the burn zone for up to 22 hours at a time, allowing fire commanders to monitor fire activity, determine the fire's direction of movement, the extent of containment and confirm new fires ignited by lightning or flying embers.

"They're piping what they're seeing directly to the incident commander, and he's seeing it in real time over a computer network," said Lt. Col. Tom Keegan.

Previously ground commanders relied on helicopters that needed to refuel every two hours.

In 2009 a NASA Predator equipped with an infrared imaging sensor helped the U.S. Forest Service assess damage from a fire in Angeles National Forest. In 2008, a drone capable of detecting hot spots helped firefighters assess movement of a series of wildfires stretching from Southern California's Lake Arrowhead to San Diego.

The Rim Fire started Aug. 17 and quickly exploded in size, becoming one of the 10 largest California wildfires on record. Its progression slowed earlier this week when it moved from parts of the forest with thick underbrush that had not burned in nearly a century to areas that had seen fire in the past two decades.

But it will burn for months, possibly until California's dry season ends this fall.

"My prediction is it will burn until we see rain," said Hugh Safford, a regional ecologist with the U.S. Forest Service.

That means the smoke could continue to foul air north of Yosemite in the Lake Tahoe basin and neighboring Nevada, although residents received something of a reprieve Wednesday when for the first time in three days blue sky was sometimes visible through the haze.

The air quality index in the Reno area still had improved only to the "unhealthy" level and in Douglas County, Nev., school children were kept indoors again when the index registered in the "hazardous" category Wednesday morning.

The air was clear, however, in the tourist mecca of Yosemite Valley, home to the towering Half Dome and El Capitan rock formations and the 2,425-foot plunge of Yosemite Falls.

The Rim Fire has destroyed 111 structures, including 11 homes, and posed a threat to ancient giant sequoias.

The fire also has threatened San Francisco's water supply at the Hetch Hetchy Reservoir, but Stratton said it was burning itself out as it approached and that crews were lighting back burns to push it back into the wilderness.

Click for coverage of the Rim Fire from Fox40.