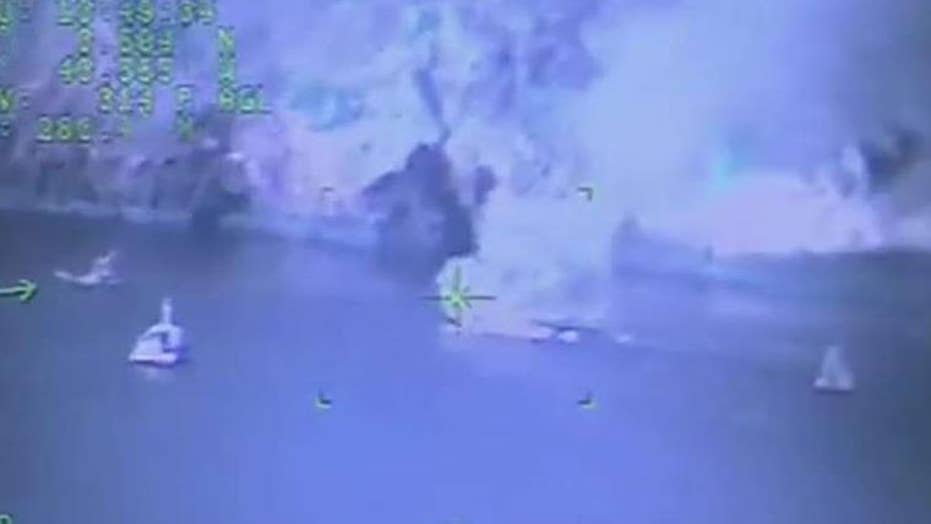 No dive boat crewmember was on required watch at the time of the fire; William La Junesse reports.

All six crew members on a scuba diving boat were asleep when it caught fire off the coast of California last week, killing 34 people, federal investigators announced Thursday.

The Conception was required to have a crewmember keep watch at night.

In a two-page preliminary report, the National Transportation Safety Board (NTSB) said five crew members were sleeping in their quarters behind the wheelhouse on the second deck and another below deck when the fire broke out in the early hours of Sept. 2.

The victims--33 passengers and one crew member--died of smoke inhalation, trapped below the raging blaze.

The report comes as investigators seek to determine the cause of the fire amid an ongoing criminal probe conducted by the FBI, Coast Guard and the U.S. Attorney’s Office. Hours after the document was made public, a salvage crew raised the wreckage of the Conception to the surface of the water near Santa Cruz Island. The boat will be taken ashore for inspection by investigators.

The Coast Guard has issued additional safety recommendations in the wake of the tragedy, such as limiting the unsupervised charging of lithium-ion batteries and the use of power strips and extension cords.

The recommendations also suggest owners and operators of vessels review emergency duties with the crew, identify emergency escapes, check all firefighting and lifesaving equipment onboard, and look at the condition of passenger accommodation spaces for “unsafe practices or other hazardous arrangements.”

Coast Guard records show the Conception passed its two most recent inspections with no safety violations. Previous customers said the company that owns the vessel, Truth Aquatics, and the captains of its three boats, were very safety conscious.

"While we don’t officially know the cause of the fire, we do believe from current evidence and testimonials that it was not caused by the operator, the boat or the crew, who acted heroically and did all in their power to try and save the lives of the passengers and their fellow crew member," Douglas Schwartz, an attorney for Truth Aquatics, said in a statement to KRON. "We all hope and anticipate new regulations will come as a result of the investigation. We would ask whether safety agencies that have been aware of the dangers of lithium-ion batteries in other modes of transportation have considered applying this knowledge to the charter boating industry.”

Schwartz also disputed the NTSB claims, saying that a crewmember "checked on and around the galley area" around 2:30 a.m. on Sept. 2. Officials have said the first mayday call was transmitted at 3:14 a.m.

NTSB spokesman Eric Weiss said only three members of the crew were interviewed before the Coast Guard asked the agency to postpone the remaining two interviews pending further investigation.

James Hall, a former NTSB chairman, told The Associated Press a preliminary report is generally a summary of the early findings that relies on interviews, inspection documents and other records and a review of current maritime rules and regulations.