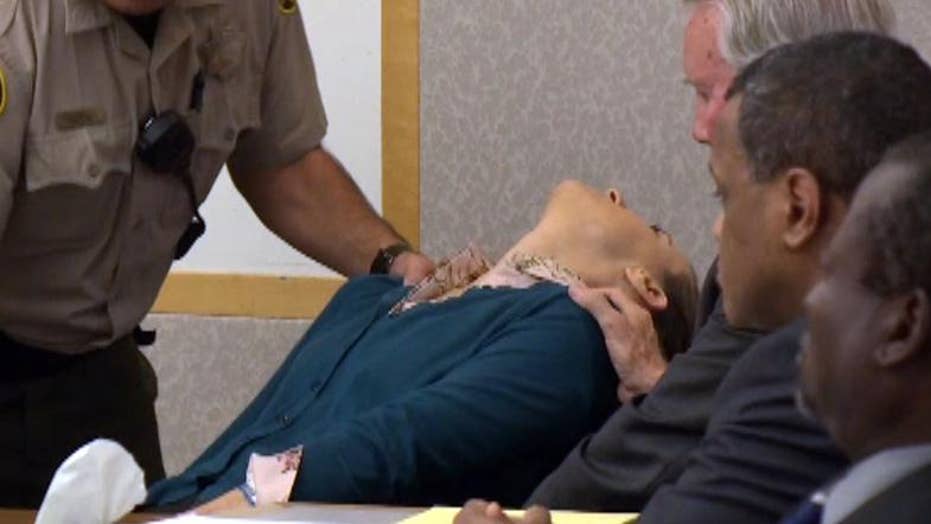 Defendant faints in court after being found guilty

Diana Lovejoy passes out, interrupts jury's verdict after being found guilty on counts of conspiracy to commit murder, attempted murder.

A California defendant, found guilty in a botched murder-for-hire plot that targeted her ex-husband, fainted as the jury read its verdict Monday in a dramatic finale to the stunning trial.

Diana Lovejoy, 45, collapsed in court after she was found guilty of a conspiracy charge as well as attempted murder, prompting loud gasps from the courtroom.

When court reconvened 30 minutes later Lovejoy was no longer at the defense table — instead she had been wheeled out by paramedics and taken to a nearby hospital, FOX5 San Diego reported.

The same jury also found gun instructor Weldon McDavid Jr., 50, guilty of attempted murder and assault with a deadly weapon for his role in the plot.

Lovejoy and McDavid planned the crime after meeting at a gun range where she was taking lessons. According to prosecutors, he contacted Lovejoy's ex-husband Greg Mulvihill on Sept. 1, 2016 posing as a private investigator claiming to have information on his estranged wife.

The caller instructed Mulvihill at the time to go to a remote dirt road where he could pick up a package containing materials related to Lovejoy, prosecutor Jodi Breton told jurors. Mulvihill and a co-worker, Jason Kovach, drove to the area together to look for a package taped to a power pole.

Kovach testified that they saw some rustling in the bushes, then noticed what looked like a person lying down with a rifle pointed at them. The witness said shots rang out, and he and a wounded Mulvihill took off running.

The prosecutor said Mulvihill, 45, was trying to reclaim his life after Lovejoy had made claims that he had molested their young son and sexually abused her. The couple had been separated since July 2014 and were in the final stages of completing their divorce, FOX5 reported.

Authorities later determined the phone used to call Mulvihill was purchased by Lovejoy, and feces found in the bushes at the scene of the shooting were traced to McDavid.

McDavid's attorney, Ricky Crawford, said his client was a trained marksman and retired Marine who fired his rifle only after he heard someone yell "I have a gun!"

"If Weldon McDavid wanted to kill someone with his skill set, he would have done so," Crawford told the jury. "That was not his intent."

“We rejected his story pretty much off the bat,” a 63-year-old male juror, who declined to give his name, told the newspaper. “He was lying. It was getting absurd at times.”