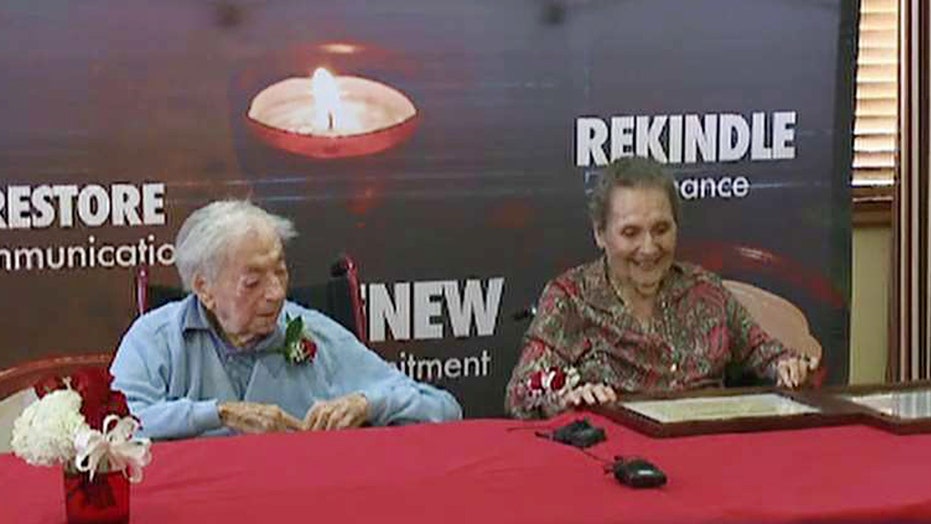 A California couple honored as the longest-married couple in the U.S. said the key to lasting love is humor.

“A sense of humor is very important and just loving each other very much is the main answer for everything,” 100-year-old Helen Goosenberg told FOX5.

Maury, left, and Helen Goosenberg have been married for 80 years. (Donna Hahn)

Her husband, Maury Goosenberg, 102, showed off the significant sense of humor that has helped lead to 80 years of wedded bliss.

“Everyone told us it wouldn’t last,” he told the San Diego Union Tribune. “Now there’s no one left alive for me to say, ‘See? I told you so.’”

The Goosenbergs are not necessarily the longest-married couple in the U.S., they’re just the longest-married of the 250 couples submitted to Worldwide Marriage Encounter for the honor, which came on Valentine's Day (naturally). The Union Tribune identified John and Anna Betar of Connecticut as the actual nationwide leader at 83 years. At least three other couples also surpass the Goosenbergs’ 80 years.

Maury and Helen met at a Halloween party in 1931, according to the Union Tribune, and eloped four years later. They didn’t have enough money to hire a photographer on their wedding day, but their families – initially opposed to the union – held a celebration on New Year’s Eve 1935 to mark the marriage. The Goosenbergs still consider Dec. 31 to be their official anniversary.