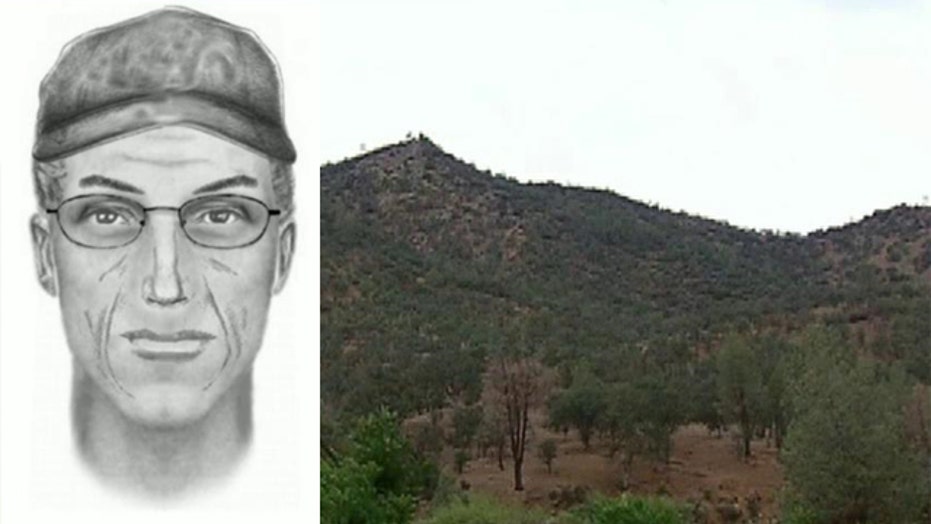 California sheriff's deputies are combing rugged, largely unoccupied terrain for a deadly gunman known to them only as a black-and-white face in a police sketch.

The suspect in a series of crimes that includes a kidnapping, a killing and the wounding of two Kern County sheriff’s deputies is thought to be a blue-eyed white male with long brown hair in his early 30s wearing a brown corduroy hat and a green bandanna.

Police believe they’re searching for a single suspect, but they have no name, no motive and seemingly no idea where he’s headed next.

"It's a large area to cover, there are a lot of places to hide"

He’s been seen by at least six people – one of whom is dead, another shot in both arms – during a crime spree largely perpetrated on foot since it began July 28.

The unidentified man started the spree last week when he kidnapped three men at gunpoint. The men escaped after about 90 minutes. The next groups he’s believed to have encountered weren’t as lucky.

The suspect is thought to be responsible for the murder of a 64-year-old retired dentist on July 30 in a cabin about 10 miles away, and the wounding of two deputies out looking for him on Aug. 1. One, Deputy Michael Booker, was shot in each arm and remains hospitalized in stable condition, according to NBC4. Senior Deputy Jose Perez sustained a minor wound to his right ear.

Authorities are searching an area east of Bakersfield, Calif., as part of a six-day manhunt involving the wounding of the deputies. (AP)

The search for the mysterious murderer is complicated by heat in excess of 100 degrees as police probe the sparsely populated mining territory 30 miles east of Bakersfield. Peaks in the area reach as high as 7,000 feet, with the vast expanse of the Mojave Desert to the east and the San Joaquin Valley to the west.

"It's rugged terrain," he said, "high desert, mountainous, a lot of the area is open, some of the area has shrubbery, bushes, tree lines, there are culverts ... it's a large area to cover, there are a lot of places to hide."

Pruitt said what signs of civilization there were in the remote area didn't necessarily help.

"The area is dotted with outbuildings, with unoccupied homes, unoccupied mobile homes and trailers," he said.