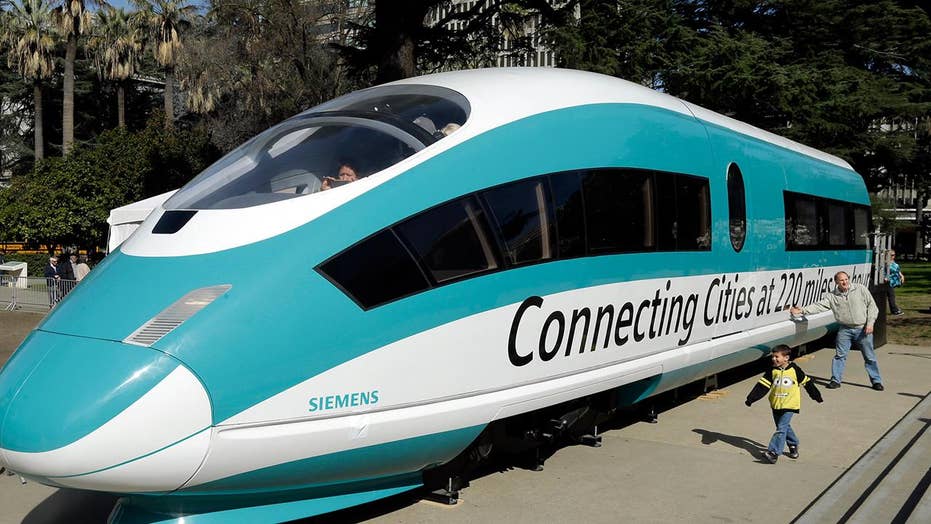 New reports reveal California’s bullet train construction project is costing $2.8 billion more than anticipated. What’s happening now and what it could mean in the future.

Not only is the massive high-speed rail project 11 years behind schedule and billions in the red, managers are now saying they will need to ramp up spending to hit a 2033 deadline.

California’s money pit cost taxpayers $3.1 million a day last year. But that’s small potatoes compared to what they’ll have to shell out over the next four if they want to meet their deadline and budget, estimated most recently at $100 billion in a report last month by the New York Times.

The California High Speed Rail Authority will have to increase its daily spending by nine times.

If the rail authority misses its 2033 target, inflation will likely raise the project’s pricetag by as much as $2 billion a year. That’s because billions of dollars of work would be shifted to the future when costs will be higher. Not hitting the deadline means the state will have to keep employees, contractors and consultants on the payroll much longer than anticipated.

Fong said that the agency’s estimates for future inflation are based on a composite of figures from Moody’s, the California Department of Transportation, the Bureau of Labor Statistics and the Department of Energy.

Bullet train planners have been under increasing pressure to make progress on the system that many believe has no plausible way of living up to its goal of getting riders across the state in three hours or less.

California voters approved the pricey proposal in 2008. Backers – including several Democratic lawmakers – heralded it as an inventive concept that would connect Californians and transform transit policies down the road.

But critics maintain the bullet train project is a waste of time and money.

“This so-called bullet train is a solution in search of a problem that is plagued by billions of dollars in cost overruns and fiscal mismanagement,” San Diego Councilman Mark Kersey told Fox News earlier this year, adding that the billions wasted on the project “could have been invested in our current infrastructure needs, such as water storage, flood control, highways and bridges.”

While supporters say the project should continue because so much money has already been spent, others say it’s time to cut and run.

The DOT is also currently auditing the West Coast venture at the request of Rep. Jeff Denham, R-Calif. A final report is due in the fall.

Denham asked for a review of the previous administration’s oversight of federal expenditures. His office told Fox News they want to know if all precautions and risk analysis were taken to ensure the state’s finances were viable to meet their non-federal match requirements. The office says while they hope the federal government didn’t break the law, they are concerned that proper safeguards weren’t in place.