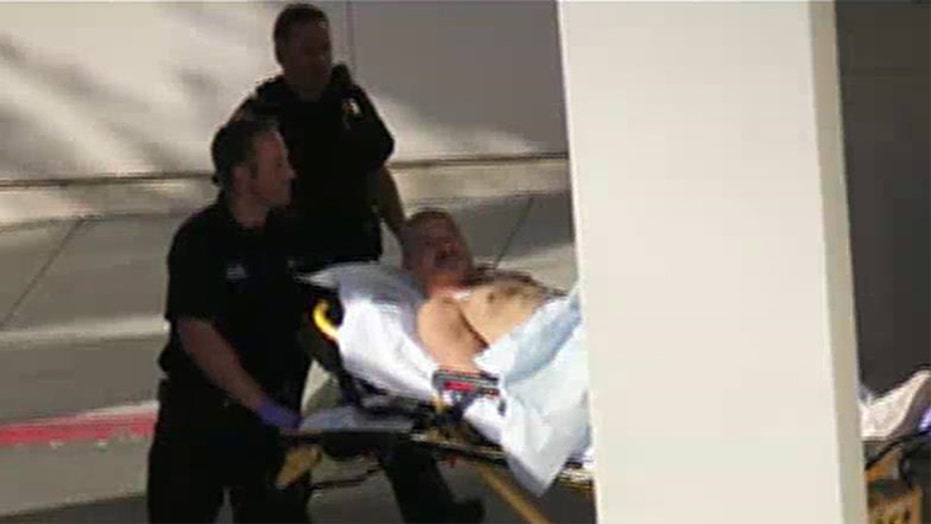 Two sheriff's deputies were killed, two other people were injured

A suspect described as a "one-man crime spree" is accused of shooting three Northern California sheriff's deputies, killing two of them and wounding a civilian, then eluding hundreds of searchers before being hunted down and forced to surrender, authorities said.

Marcelo Marquez of Salt Lake City was examined at a hospital for unknown injuries.

"I think there's those people who would say, 'You know what, I wish you'd killed him,'" Placer County Sheriff Ed Bonner said at a news conference Friday evening. "Now, that's not who we are. We are not him. We did our job."

It wasn't immediately clear when they would be formally booked.

The deadly chain of events began around 10:30 a.m. when Sacramento County sheriff's Deputy Danny Oliver, 47, was shot in the forehead with an assault rifle at close range as he checked out a suspicious car in a Motel 6 parking lot, authorities said.

Oliver, 47, was the first county deputy killed since 2008. The 15-year veteran left a wife and two daughters.

"He was not able to return fire or do anything" but his partner was able to shoot back, Sacramento County Sheriff Scott Jones said.

The car, which had a man and woman inside, then drove about a mile and the couple tried to carjack a driver and shot him in the head when he refused to give up his keys, authorities said.

Anthony Holmes, 38, of Sacramento, was listed in serious condition at a hospital Friday night, the Sacramento Bee reported

The attackers then stole another car and finally took a red Ford pickup from Jose Cruz, who was gardening outside a client's house in Sacramento.

Cruz told the Bee that a man in a white Ford Mustang convertible told him: "I need a favor."

Cruz said the man pointed a gun at him and had a bloody shirt wrapped around his other arm.

The couple then fled to neighboring Placer County, about 30 miles north of Sacramento, authorities said.
In Auburn, the truck briefly pulled over to the side of a road and two Placer County deputies spotted it and approached.

Homicide Detective Michael David Davis Jr., 42, died at a hospital - 26 years to the day after his father, for whom he was named, died in the line of duty as a Riverside County deputy sheriff in Southern California.

Davis was a 15-year veteran of the department and a father of four.

The wounded deputy, Jeff Davis, is a 17-year veteran who was shot in the arm. He was released after treatment at a hospital.

"This guy was on a one-man crime spree today. He has no idea of the damage he did," Erwin said.

Dozens of deputies flooded the area but the gunman fled into a neighborhood near a high school and ran into a home.
Police finally used tear gas to flush Marquez from the basement of the home, witnesses said.

The long manhunt involved hundreds of officers from multiple agencies backed by search dogs, helicopters and armored vehicles. Residents nearby were told to stay indoors, and schools were locked down during the search.
Flags at the state Capitol were ordered flown at half-staff and Gov. Jerry Brown issued a statement extending his sympathy to the families of the slain officers.

Their "brutal murders," Brown said, "...are a tragic reminder of the sacrifices we demand of our peace officers and the incredible courage they display as they protect our communities."