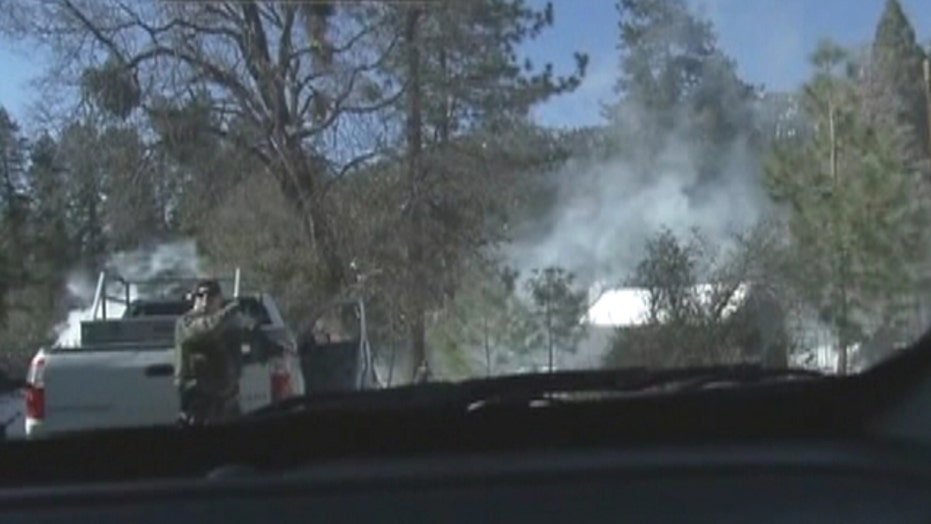 California authorities believe the manhunt for the revenge-seeking ex-cop ended Tuesday after the suspect engaged in a deadly shootout with police before the vacation cabin he occupied erupted in flames.

Christopher Dorner, the suspect in four killings who had been on the run for six days, never emerged from the ruins, but hours later a charred body was found inside a cabin. An official briefed on the investigation tells The Associated Press that a wallet with a California driver's license with the name Christopher Dorner has been found in the burned rubble of a cabin.

Speculations had been mounting over whether police had purposely started a fire to smoke out the suspect, but San Bernardino County Sheriff John McMahon told reporters Wednesday his deputies did not intentionally burn down the mountain.

McMahon said deputies shot pyrotechnic tear gas into the cabin and it erupted in flames. He says the tactic was intended to drive Dorner out, but it was not their intention to set the cabin on fire. McMahon did not say directly that the tear gas started the blaze and the cause of the fire remained unclear.

"We have reason to believe that it is him," San Bernardino County sheriff's spokeswoman Cynthia Bachman said. The LAPD said it would not consider the manhunt completed until the remains are identified.

McMahon said authorities were working to identify the remains, but had not done so yet. The condition of the body is unclear.

The search ended when a man believed to be Dorner bolted from hiding, stole two cars, barricaded himself in a vacant cabin and took part in a shootout in which he killed one sheriff's deputy and wounded another.

Game wardens from the California Department of Fish and Wildlife who were part of the search detail spotted the purple Nissan Tuesday that had been reported stolen going in the opposite direction and gave chase, department spokesman Lt. Patrick Foy said. The driver looked like Dorner.

They lost the purple car after it passed a school bus and turned onto a side road, but two other Fish and Wildlife patrols turned up that road a short time later, and were searching for the car when a white pickup truck sped erratically toward the wardens.

"He took a close look at the driver and realized it was the suspect," Foy said.

Dorner, who allegedly stole the pickup truck at gunpoint after crashing the first car, rolled down a window and opened fire on the wardens, striking a warden's truck more than a dozen times.

One of the wardens shot at the suspect as he rounded a curve in the road. It's unclear if he hit him, but the stolen pickup careened off the road and crashed in a snow bank. Dorner then ran on foot to the cabin where he barricaded himself and got in a shootout with San Bernardino County sheriff's deputies and other officers who arrived.

Two deputies were shot, one fatally. McMahon identified the deceased deputy as 35-year-old a man who grew up in the area and followed his father into public service. MacKay suffered multiple gunshot wounds Tuesday and was transported to Loma Linda Hospital where he died of his injuries. MacKay was a detective who had been with the department for 15 years.

"My condolences go out to the MacKay family," said McMahon. "This is truly another sad day for law enforcement. Our department is grieving from this event. It's just a terrible deal for all of us."

MacKay and his partner had been on duty since 5 a.m. and they were in good spirits. He stood by the door of his car, dressed in full tactical gear with a helmet and bulletproof vest. He took his Mini-14 rifle out and practiced sighting down its barrel, tucking it in against his shoulder and aiming playfully at a snowdrift.

When a reporter walked up behind him, he turned around with a big smile. MacKay said he was happy to be helping the community and that "everyone's been really nice."

It was MacKay's third day helping with the search for Dorner.

Dorner is believed to have ended up at the Seven Oaks Mountain Cabins.

A SWAT team surrounded the cabin and used an armored vehicle to break out the cabin windows, said a law enforcement official who requested anonymity because the investigation was ongoing. The officers then pumped gas into the cabin and blasted a message over a loudspeaker: "Surrender or come out."

The Los Angeles Times reported that just before 5 p.m., authorities began closing in on the suspect. After the tear gas, authorities used a demolition vehicle that removed portions of the cabin’s walls, the report said.

A single gunshot eventually rang out and the cabin became engulfed in flames, the Times reported.

Dorner, 33, had said in a lengthy rant police believe he posted on Facebook that he expected to die in one final, violent confrontation with police, and if it was him in the cabin that's just what happened.

The apparent end came very close to where his trail went cold when his burning pickup truck -- with guns and camping gear inside -- was abandoned on a fire road in the San Bernardino National Forest near the ski resort town of Big Bear Lake.

His footprints led away from the truck and vanished on frozen soil.

With no sign of him and few leads, police offered a $1 million reward to bring him to justice and end a "reign of terror" that had more than 50 families of targeted Los Angeles police officers under round-the-clock protection after he threatened to bring "warfare" to the LAPD, officers and their kin.

Just a few hours after police announced Tuesday that they had fielded more than 1,000 tips with no sign of Dorner, word came that a man matching his description had tied up two people in a Big Bear Lake cabin, stole their car and fled. Authorities didn't immediately give more details on the two people.

Until Tuesday, authorities weren't sure Dorner was still in Big Bear Lake, where his pickup truck was found within walking distance from the cabin where he hid.

Even door-to-door searches failed to turn up any trace of him in the quiet, bucolic neighborhood where children were playing in the snow Tuesday night.

With many searchers leaving town amid speculation he was long gone, the command center across the street was taken down Monday.

Ron Erickson, whose house is only about a quarter mile away, said officers interrogated him to make sure he wasn't being held hostage. Erickson himself had been keeping a nervous watch on his neighborhood, but he never saw the hulking Dorner.

"I looked at all the cabins that backed the national forest and I just didn't think to look at the one across from the command post," he said. "It didn't cross my mind. It just didn't."

Police say Dorner began his run on Feb. 6 after they connected the slayings of a former police captain's daughter and her fiance with his angry manifesto.

Dorner blamed LAPD Capt. Randal Quan for providing poor representation before the police disciplinary board that fired him for filing a false report.

Dorner, who is black, claimed in his online rant that he was the subject of racism by the department and was targeted for doing the right thing.

Chief Charlie Beck, who initially dismissed Dorner's allegations, said he would reopen the investigation into his firing -- not to appease the ex-officer, but to restore confidence in the black community, which had a long fractured relationship with police that has improved in recent years.

Dorner vowed to get even with those who had wronged him as part of his plan to reclaim his good name.

"You're going to see what a whistleblower can do when you take everything from him especially his NAME!!!" the rant said. "You have awoken a sleeping giant."

Within hours of being named as a suspect in the killings, the 6-foot, 270-pounder described as armed and "extremely dangerous," tried unsuccessfully to steal a boat in San Diego to flee to Mexico. After leaving a trail of evidence, he headed north where he opened fire on two patrol cars in Riverside County, shooting three officers and killing one.

With a description of his car broadcast all over the Southwest and Mexico, he managed to get to the mountains 80 miles east of Los Angeles where his burning truck was found with a broken axle.

Only a short distance from the truck, he spent his final days with a front-row seat to the search mobilized right outside.