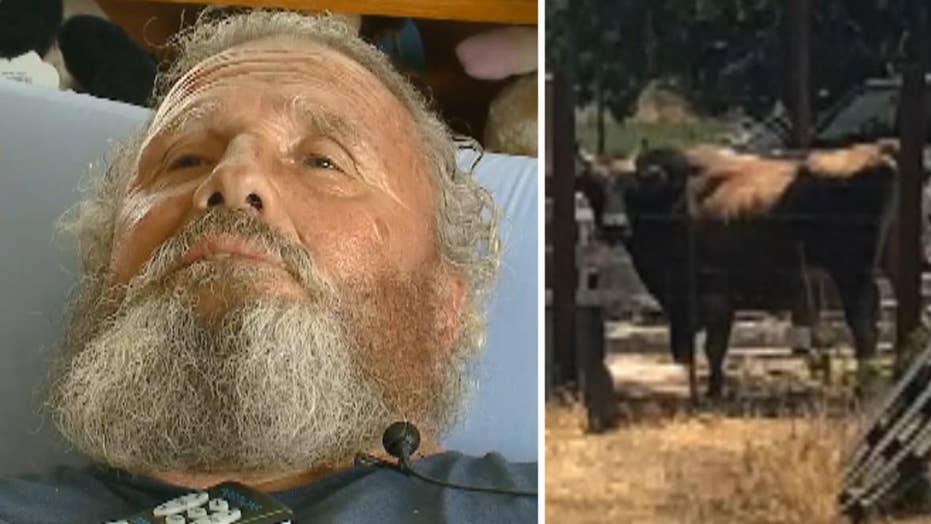 69-year-old California man says he's still alive after getting gored twice by bull because of good karma from saving woman from burning house in the 1970s.

A California man's trip to buy a used car Wednesday almost cost him his life after he came face-to-face with an aggressive bull.

Walt Dean King told FOX40 he went to check out the used car on a rural property in Tracy, located about 60 miles east of San Francisco, when he was suddenly knocked to the ground by the animal.

"I remember feeling the horn going through my right side and the next thing I knew, I was on the ground, close to a bush, and I crawled between the bush and the house and the bull stood over me and snorted for about 20 minutes," King said.

King, 69, told FOX40 he didn't remember seeing the animal before getting knocked down to the ground, but remembered being gored twice before someone stopped and honked a car horn.

ONE GORED, 3 TRAMPLED IN SPAIN'S RUNNING OF THE BULLS FESTIVAL

After he was taken to the hospital, King underwent three hours of surgery on both sides of his stomach. He told FOX40 doctors informed him his belly fat saved him from an even worse injury, and that he might not know the full extent of the damage for six months.

While a family member told the 69-year-old he had an angel there making sure he didn't bleed to death, King believes there was something else that kept him alive.

"It was karma, because back in the 70s, I had pulled a lady out of a burning building, so now I think I’m being paid back, by not dying. I think he might be right. That’s the only thing I can say, I don’t know why else," he told FOX40. "I shouldn’t be here right now, but I am."