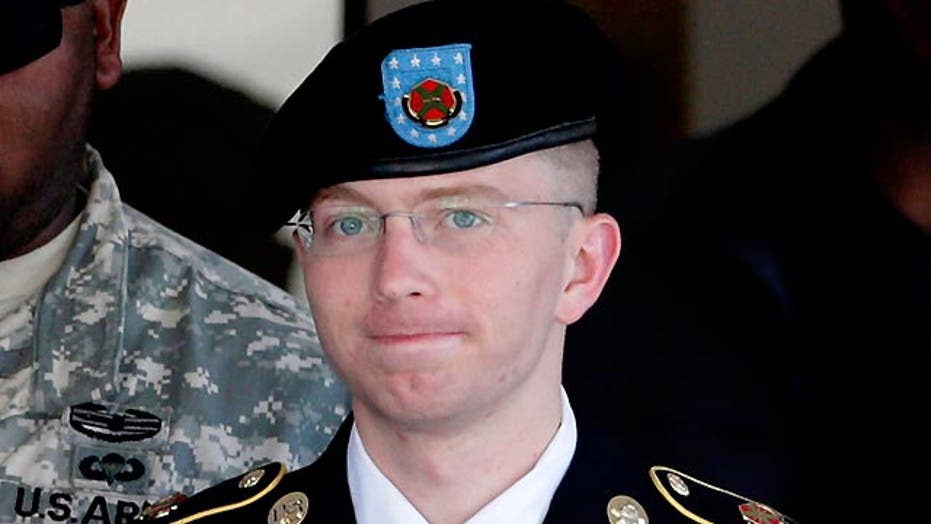 FORT MEADE, Md. – The Army private arrested in the biggest leak of classified material in U.S. history pleaded guilty Thursday to 10 charges that could send him to prison for 20 years, saying he was trying to expose the American military's "bloodlust" and disregard for human life in Iraq and Afghanistan.

Military prosecutors said they plan to move forward with a court-martial on the 12 remaining charges against Bradley Manning, including aiding the enemy, which carries a potential life sentence.

For the first time, Manning directly admitted leaking the material to the anti-secrecy website WikiLeaks and detailed the frustrations that led him to do it.

"I began to become depressed at the situation we found ourselves mired in year after year. In attempting counterinsurgency operations, we became obsessed with capturing and killing human targets on lists," the 25-year-old former intelligence analyst in Baghdad told a military judge.

He added: "I wanted the public to know that not everyone living in Iraq were targets to be neutralized."

The slightly built soldier from Oklahoma read from a 35-page statement through his wire-rimmed glasses for more than an hour. He spoke quickly and evenly, showing little emotion even when he described how troubled he was by what he had seen.

The judge, Col. Denise Lind, accepted his plea to 10 charges involving illegal possession or distribution of classified material. Manning was allowed to plead guilty under military regulations instead of federal espionage law, which knocked the potential sentence down from 92 years.

He will not be sentenced until his court-martial on the other charges is over.

He said he was disturbed by the conduct of the wars in Afghanistan and Iraq and the way American troops treated the populace. He said he did not believe the release of the information would harm the U.S.

"I believed that if the general public, especially the American public, had access to the information ... this could spark a domestic debate on the role of the military and our foreign policy in general," Manning said.

Manning said he was appalled by 2007 combat video of an assault by a U.S. helicopter that killed 11 men, including a Reuters news photographer. The Pentagon concluded the troops mistook the camera equipment for weapons.

"The most alarming aspect of the video to me was the seemingly delightful bloodlust the aerial weapons team happened to have," Manning said, adding that the soldiers' actions "seemed similar to a child torturing ants with a magnifying glass."

As for the sensitive State Department cables, he said they "documented backdoor deals and criminality that didn't reflect the so-called leader of the free world."

The battlefield reports were the first documents Manning decided to leak. He said he sent them to WikiLeaks after contacting The Washington Post and The New York Times. He said he felt a reporter at the Post didn't take him seriously, and a message he left for news tips at the Times was not returned.

Times spokeswoman Eileen Murphy said Thursday of the purported phone call: "This is news to us."

The Obama administration has said the release of the documents threatened valuable military and diplomatic sources and strained America's relations with other governments. The administration has aggressively pursued individuals accused of leaking classified material, and Manning's is the highest-profile case.

Manning has been embraced by some left-leaning activists as a whistle-blowing hero whose actions exposed war crimes and helped trigger the Middle Eastern pro-democracy uprisings known as the Arab Spring in 2010. He has spent more than 1,000 days in custody.

The soldier said he corresponded online with someone he believed to be WikiLeaks founder Julian Assange but never confirmed the person's identity.

WikiLeaks has been careful never to confirm or deny whether Manning was the source of the documents it has posted on the Web.

Reached by telephone in Britain on Thursday, Assange would not say whether he had any dealings with Manning but called him a political prisoner and said his prosecution was part of an effort by the U.S. to clamp down on criticism of its military and foreign policy.

Assange himself remains under investigation by the U.S. and has been holed up in the Ecuadorean Embassy in London for the better part of a year to avoid extradition to Sweden on sex-crimes allegations.