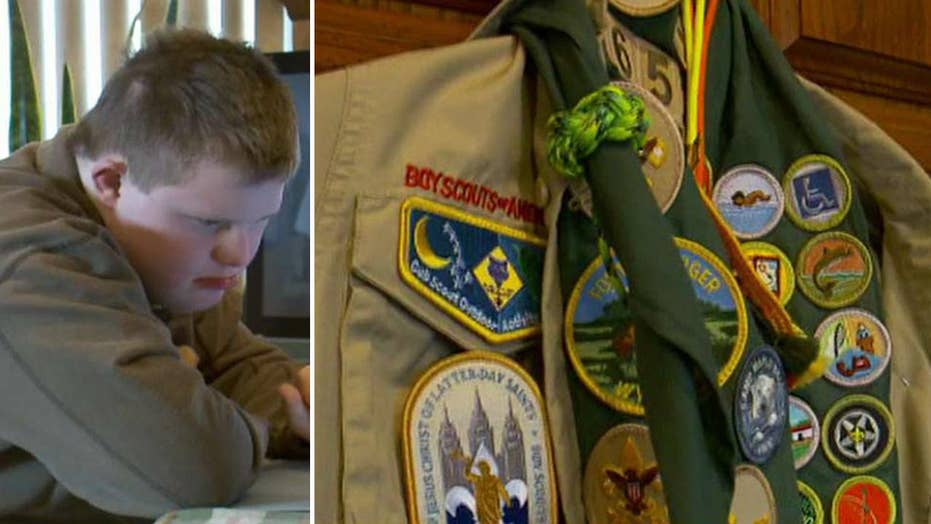 Father accuses group of discriminating against his son who has Down syndrome. Alicia Acuna has more on the case.

The father of a boy with Down syndrome filed a lawsuit last week accusing the Boy Scouts of America of allegedly blocking his son from becoming an Eagle Scout and revoking his 22 merit badges that he worked two years to earn.

Logan Blythe, 15, has been a boy scout through the National Parks Council in Utah, and has been able to advance up the ranks because the council has made accommodations when necessary, his father, Chad, said.

The teenager had planned to create kits for special-needs babies as his Eagle project when the family learned in November the national organization voided every merit badge he obtained. Chad Blythe told The Washington Post on Tuesday he learned of the news in an email.

“I have been asked to suspend Logan’s Eagle Project approval,” the email stated. “Please do not do any more work on his project.”

The family sued the Boy Scouts and the Utah National Parks Council for "outrageous and reckless conduct."

In the suit, they demanded the Boy Scouts of America “accommodate Logan and provide damages of at least $1.”

Chad Blythe told People his son was “distraught” after learning he was blocked from becoming an Eagle Scout.

“He was let down. Hurt. You could see in his mannerisms that he was not happy,” the father told the magazine. “Since then, we’ve only been able to get him to wear his scout uniform one time. He won’t even go near it. He looks visibly distraught when we talk about this.”

Chad told Fox News his son has stopped going to meetings and felt he should have been able to keep the badges.

"This particular boy's case, this is as much as he can do. Let's accept that and give him the badge. Why? Because he tried and he's done his best," he said.

The Boy Scouts said it worked with the council and the Blythe family to offer "alternative merit badges" and a path to becoming an Eagle. A spokesperson for the organization told People that Logan was still considered a Boy Scout and his badges were not voided.

However, Chad Blythe told The Washington Post the organization has not contacted the family and would not respond to his emails. He said he has received a lot of support from the public following the news.

“If we can make a change and make something positive come of all of this, then the next kid … won’t have to do what we’re doing now,” Chad Blythe said. “And they won’t be hurt and let down the way Logan has been let down.”