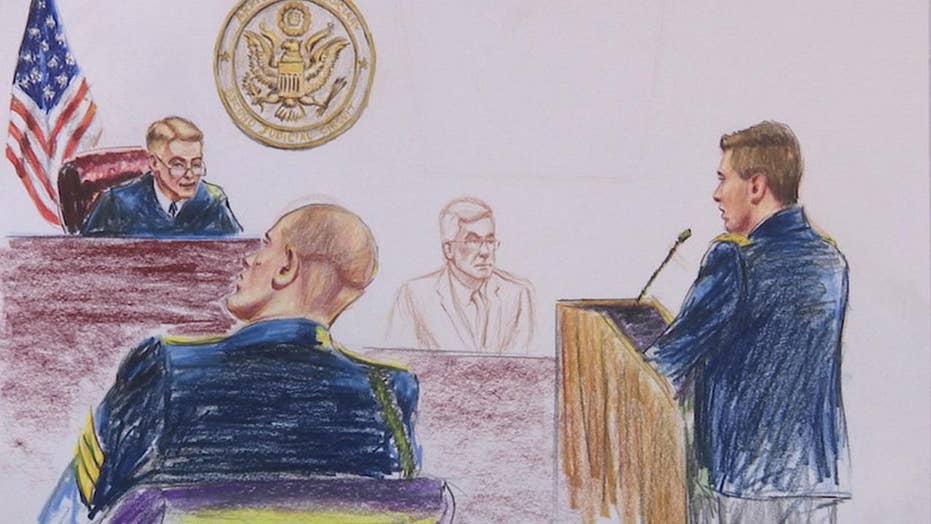 During a sentencing hearing on an army base in North Carolina Defense attorneys and the government gave closing remarks for Sgt Bowe Bergdahl, the soldier who endangered his comrades by walking off his post in Afghanistan in 2009. Military judge Col. Jeffery Nance says he may have a decision regarding a punishment for Bergdahl as early as Friday

Prosecutors at the sentencing hearing for Army Sgt. Bowe Bergdahl pushed the judge Thursday to hand him a 14-year prison term as both sides delivered their closing remarks.

Army Col. Jeffery Nance said he planned to spend Thursday afternoon deliberating the punishment for Bergdahl, who endangered his comrades by walking off his post in Afghanistan in 2009.

Prosecutors again cited serious wounds to several service members who searched for Bergdahl. They recommended a prison sentence of 14 years and a punitive discharge.

Defense attorneys argued for leniency, citing Bergahl's five years in Taliban captivity, campaign-trail criticism by Donald Trump and his mental disorders. They asked for a dishonorable discharge but no confinement as Bergdahl's sentence.

Nance planned to open court again Friday and could continue deliberating then, The Associated Press reported. He didn't indicate when he would deliver the sentence.

ARMY SGT. BOWE BERGDAHL: WHO IS HE?

Bergdahl, who pleaded guilty to desertion and misbehavior before the enemy, told the judge Monday that he didn't mean to cause harm when he walked off his post.

He spoke for two hours, apologizing to those wounded searching for him, and describing his captivity and the challenges he still faces with daily life.

Asked by a defense attorney what the worst part was, he said it wasn't the beatings: "The worst was the constant, just the constant deterioration of everything. The constant pain from my body falling apart. The constant screams from my mind," he said, haltingly.

"It was the years of waiting to see whether or not the next time someone opens the door if that would be the person coming to execute you."

Earlier Monday, the wife of a soldier who was shot in the head during a search mission Bergdahl in Afghanistan delivered emotional testimony, tearing up as she described him as no longer being able to play with their children and how they “can't even hold hands anymore.”

Last week, a former U.S. Navy SEAL cried while testifying about his military dog who was shot in the head by enemy fighters in Afghanistan while he was on a mission to find Bergdahl.

Nance said Monday that the court has not been directly affected by Trump's remarks, nor would the comments cause a reasonable member of the public to have doubts about the fairness of the military justice system.

"I am completely unaffected by any opinions President Trump may have about Sgt. Bergdahl," the judge said. He added that prosecutors had convinced him that the Trump comments won't put "an intolerable strain" on the public perception of military courts.

Then-Republican nominee Trump repeatedly called Bergdahl a traitor on the campaign trial and suggested that he be shot or thrown from a plane without a parachute. Trump revived those comments when Bergdahl pleaded guilty on Oct. 16 by saying at a news conference that he thinks people are aware of what he said before.

Fox News’ Terace Garnier and The Associated Press contributed to this report.