Hundreds of protesters gathered Monday outside of the Massachusetts Statehouse in Boston to demand Gov. Charlie Baker open up the state's economy amid restrictions to combat the coronavirus pandemic.

Chanting "End the shut down now," the crowd stood in close proximity to each other without face masks on Boston's Beacon Street in what some said was an effort to protect their livelihood.

“We want to work. We want to be out there. We want to feed our family,” one protestor told WHDH-TV. “We don’t have to be locked in our houses.”

Demonstrators waved American flags and pro-Trump signs and called for an end to stay-at-home orders. The gathering, called the Liberty Rally, was promoted by Super Happy Fun America, the group behind last year's Straight Pride Parade, the Boston Globe reported.

Baker's order and the closure of nonessential businesses remain in effect until May 18. Massachusetts has taken aggressive steps to curtail the spread of COVID-19. Beginning Wednesday, those caught violating social distancing practices in public or not wearing a face mask can face up to $300 in fines.

“We should be able to decide whether or not we want to work, social distance, or wear a mask,” an unidentified 61-year-old man told the Globe. “I think people are going to get hooked on government pay — it is government overreach.”

Boston's gathering comes amid a surge in demonstrations across the country against state government restrictions banning large gatherings and the closure of several industries, resulting in layoffs and worker furloughs.

Statewide, Massachusetts recorded more than 69,000 cases of the infectious disease, including more than 4,000 deaths. Public health officials have cautioned about prematurely lifting restrictions over fears of a spike on COVID-19 infections and deaths. 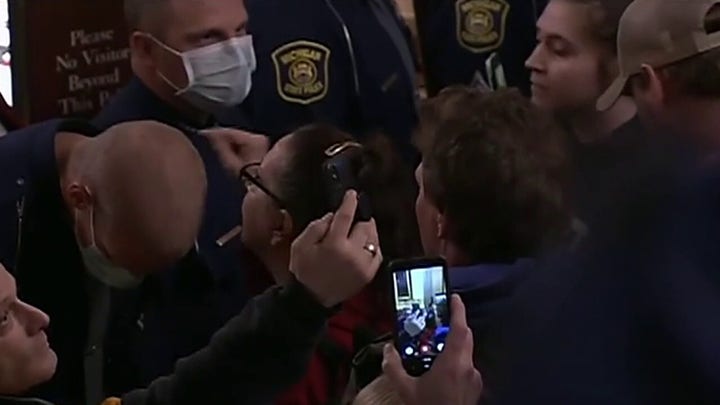 Last week, dozens of demonstrations in Michigan stormed the state Capitol building to demand lawmakers begin efforts to normalize society. Some were armed with rifles and no one practiced social distancing.

Hours later, Michigan Gov. Gretchen Whitmer extended her state of emergency and disaster declaration through May 28. Her stay-at-home order expires May 16.