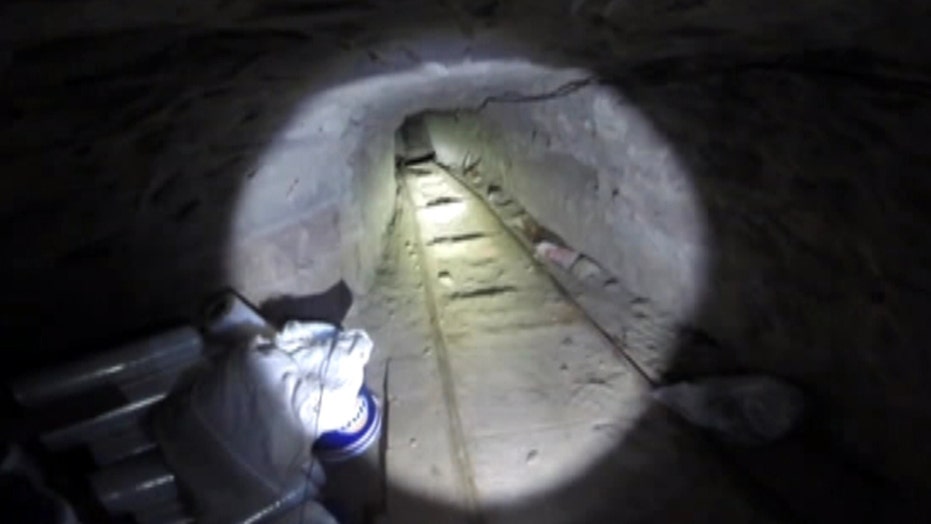 A look inside the tunnel found under the US-Mexico border

With a GoPro camera strapped to his helmet, a U.S. Border Patrol agent dropped down into a newly discovered drug tunnel under the U.S.-Mexico border, where he uncovered lights, a series of stairwells and a sophisticated rail system.

The discovery of the once-secret 800-yard tunnel — believed to be the longest ever found in California — led investigators to more than a ton of cocaine and seven tons of marijuana, officials said Wednesday.

The tunnel extends 300 yards from a house in Tijuana, Mexico, to the border and then 500 yards on the U.S. side to a fenced lot in the San Diego industrial area of Otay Mesa. The lot was advertised as a wooden pallet business, with one sign reading, "Otay Pallets -- We Buy Pallets."

In addition to the rail system, the tunnel was equipped with an elevator that could fit up to 10 people, officials said. The exit on the U.S. side is about 3 feet wide and was covered by a trash bin. U.S. Attorney Laura Duffy told reporters the bin was used to store narcotics that had been spirited into the U.S.

She also said the tunnel was unusual because it was used for cocaine, not just marijuana.

Six people were arrested in San Diego on Friday and charged with crimes involving drugs and construction of the tunnel. It was the 13th sophisticated secret passage found along California's border with Mexico since 2006, including three on the same short street in San Diego that runs parallel to a border fence with a densely populated residential area on the Mexican side.

Border Patrol agents had the lot under surveillance for months after a fellow agent alerted them to it last year, Duffy said. Authorities believe the operation that was foiled Friday had followed a series of dry runs over the prior few months.

The discovery demonstrates the enduring appeal of tunnels to smugglers despite the significant time and money required to build one, investigators say. Dozens of tunnels have been found along the U.S.-Mexico border in recent years, some equipped with hydraulic lifts and electric rail cars. Most of the tunnels found were in California and Arizona, many of them incomplete.

The San Diego-Tijuana region is popular because its clay-like soil is relatively easy to dig with shovels and pneumatic tools, and both sides of the border have warehouses that provide cover for trucks and heavy equipment.