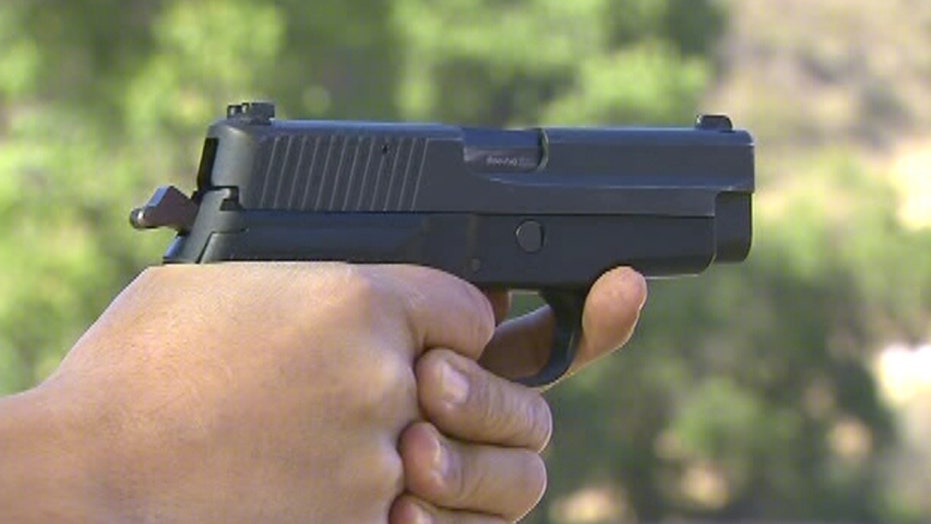 The .380 semi-automatic handgun has become all the rage in firearms, as more states relax conceal-carry restrictions and men and women alike turn to a palm-sized gun that easily fits into a handbag, pocket or ankle holster. Production of the super-small handgun is at a 16-year high, with nearly 900,000 made in the U.S. in 2014, according to the Bureau of Alcohol, Tobacco, Firearms and Explosives. And those numbers come even as production and sale of long guns and large-caliber handguns are actually down, according to the pro-gun gontrol news site TheTrace.org.

“The .380 is generally a smaller frame and much easier to conceal than a more bulky 9-mm. or .40 caliber pistol – particularly under summer wear,” security consultant and host of the National Rifle Association “Defending Our America” campaign, Del Wilber, told FoxNews.com. “Yet it still possesses the knock-down power needed in a potential life-or-death shooting situation.

“It is especially suited for women as they generally have smaller hands,” he added.

“It is especially suited for women as they generally have smaller hands.”

Often referred to as the .380 ACP (Automatic Colt Pistol) or a 9-mm. short, the .380 -- which first hit the market in 1908 -- features a pistol cartridge even tinier and lighter than that of the popular 9-mm. handgun. But despite its surging popularity, there is debate over the .380’s utility as a weapon of self-defense.

“The smaller, more compact frames are more difficult to shoot and their durability is lower than the slightly larger sub-compacts,” noted Jeff Gonzales, president of Trident Concepts, which specializes in personal protection tactics and training for armed and unarmed conflicts. “The accuracy component is also lower due to a more challenging platform to shoot.”

The .380 is easily concealed in a purse or ankle holster. (PersonalDefenseWorld.com)

Other critics agree, saying that relying on such a small gun in a high-pressure, self-defense scenario requires training beyond the typical point-and-shoot sessions at a range.

“The difficulty largely stems from the smaller size; which ironically is a main reason for purchase,” Gonzales said.

Historically, the .380 has had a reputation for poor quality that earned it the derisive nickname of “Saturday Night Special.” In the 1960s and '70s, the tiny weapons were cheap and associated with criminal acts. Subpar materials and production made them susceptible to accidental discharge incidents and jamming.

Today, the gun is generally well-made, retails from $300 to $800 and typically holds between six and eight rounds. Major manufacturers from Glock, Bersa, Walther, Colt and Kahr to Kel-Tec, Ruger, Sig Sauer and Smith & Wesson are all producing at least one .380 model.

Earlier this month, West Virginia passed a law allowing gun owners 21 or older to carry concealed guns without a permit, making it one of eight states – Alaska, Arizona, Kansas, Vermont, Maine, Montana and Wyoming are the others – to have adopted such a policy. Thirty-three other states, have “shall issue” laws in which a person meeting specific criteria must be issued a conceal-carry permit. Only nine remaining states – California, Delaware, Hawaii, New York, New Jersey, Connecticut, Rhode Island, Massachusetts and Maryland – have “may issue” regulations, which give state or local law enforcement agencies discretion in approving or denying permits.

Some 26 states currently allow open carrying of guns without a permit, and another 17 have a “shall issue” open-carry permit policies.

Eric Poole, editor of Guns & Ammo magazine, said that in the past, .380 ammunition was routinely challenging to find in store, but that problem has improved in the last few years due to the manufacture improvements. He said anti-gun political rhetoric has largely backfired, and driven sales of guns to historic highs.

“With tragedies playing out in marked ‘safe’ places, Americans realize that no place is off-limits for the criminal mind. This is why people are interested in becoming self-reliant for self-defense and less dependent on the response time of an armed police officer to save the day,” Poole said.

But while “thin is in” right now, firearms enthusiasts anticipate that much like cellphones, the preferred size of personal protection guns is cyclical.

“The thing about guns in the hands of consumers is that they are like dresses and shoes,” said Santiago. “The fashion comes and goes.”