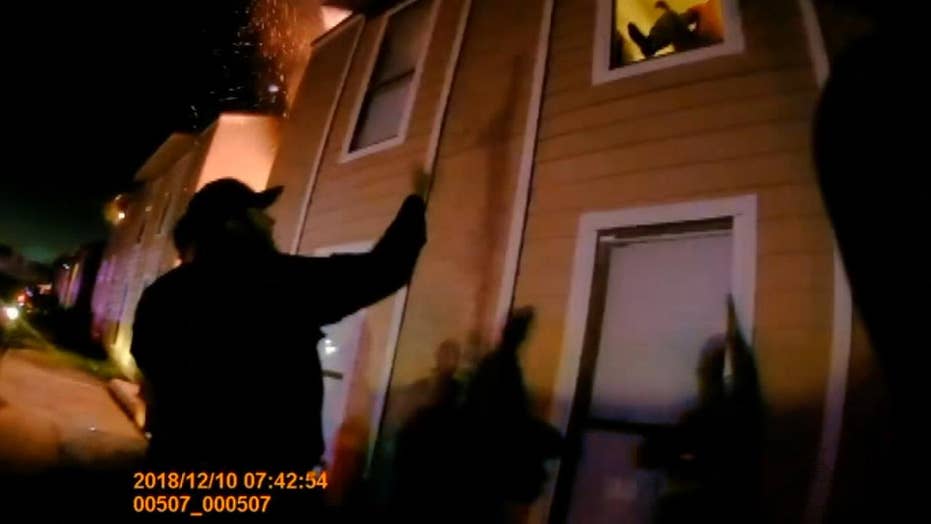 Body cam footage shows officers with the Balch Springs Police Department save an 8-year-old boy and his mother from their burning apartment in Texas.

Officers Tyler Gross, Corey Jones and David Fields with the Balch Springs Police Department arrived at the apartment complex before firefighters made it to the scene. Body cam footage shows the trio alerting residents and neighbors to the fire roaring nearby -- when they suddenly discover a mother and her son trapped in a second-floor unit.

“[We were] scared to death because you know what fire does and how fast it moves,” Fields told WFAA.

Keisha Sowels and her 8-year-old son, Kingston, were trapped inside the apartment, and the only way out was through a window -- which she couldn't open, Sowels told FOX4.

The body camera footage shows officers telling Sowels to try to kick out the glass, and when that doesn't work, Jones is seen throwing a baton at the window to smash it.

He and the other officers then encourage Kingston to jump.

“He was just scared,” Jones told FOX4. “I think anybody would be with flames behind them and a jump before him. He knew that we were down there, and we’re going to catch him. He didn’t think twice and jumped out the window.”

Raw video: Police in Waukegan, Illinois release body cam footage showing officer tackle teen girl who said she was going to stand in front of passing train to kill herself.

The three officers were able to catch Kingston and, soon after, the fire department arrived and got Sowels to safety using a ladder.

Police said no one in the apartment complex was seriously hurt in the fire; however, several apartments were damaged by the flames. The fire itself is considered “suspicious” and is under investigation, FOX4 reported.

“I just thank God that they took the time to do what they were called to do as officers and firefighters,” Sowels said. “I really appreciate it. I am totally grateful...Y’all are definitely angels in my eyes, and I really appreciate it and I am grateful for the rest of my life.”

Jones told WFFA he believes any cop would have acted the same way as he and his fellow officers.

“Not wait for fire, not wait for anyone else,” he said. “We’re going to do what we can to help anyone that we can.”