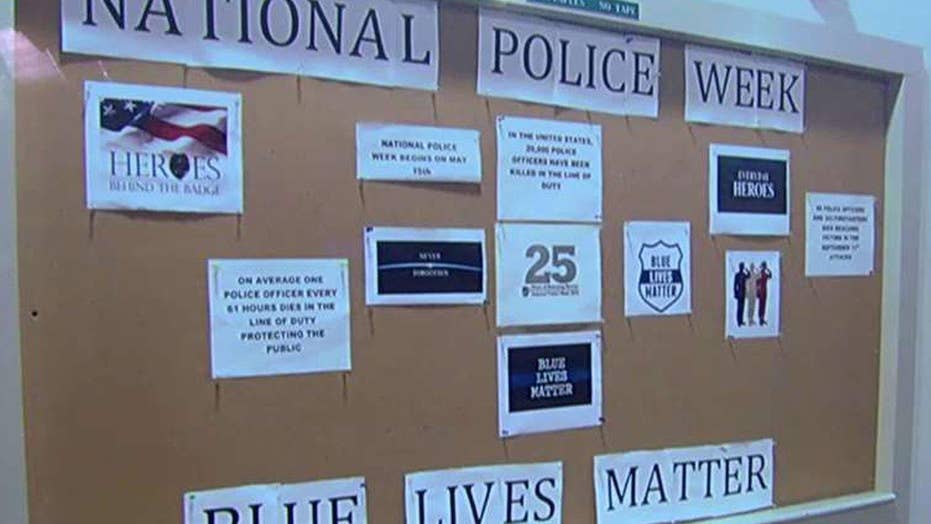 College Republicans blast Dartmouth administration for how it handled vandalism; reaction on 'Outnumbered'

In place of the “Blue Lives Matter” tribute, which was created during National Police Week, were four fliers reading: “You cannot co-opt the movement against state violence to memorialize its perpetrators. #blacklivesmatter,” The Dartmouth Review reported.

“The next morning we got up and we saw that our display was torn apart and replaced with Black Lives Matter posters,” Dartmouth College Republicans President Michelle Knesbach told Fox News on Monday.

"By framing that as '[Blue Lives Matter,' it normalizes and naturalizes violence against people of color in this country," she told The Dartmouth. "And that is not okay. That is in no way okay."

Knesbach, however, said the activism went beyond the billboard revamp.

“Throughout the entirety of the day, 25 Black Lives Matter protesters were standing in front of billboards,” she told On the Record's Greta Van Susteren. “Not only did they replace our billboard with their display, they also replaced all of the other billboards in the student center with Black Lives Matter posters and posted pictures of our club members’ faces with ‘Sons of Old Dartmouth’ written over it.”

School administrators reportedly didn’t respond or condemn the incident until two days later. College President Phil Hanlon sent a campus-wide email Sunday calling the initial remove of the police display "an unacceptable violation of freedom of expression." But Hanlon also equated the billboard drama to a November incident in which Black Lives Matter t-shirts were removed from a display.

Initially, the College Republicans were not allowed to replace the
police display due to “safety and security” concerns, Knesbach said.

But Collins Center director Anna Hall told The Dartmouth that the Black Lives Matter posters were taken down Saturday morning to allow the reposting of the police tribute.

A sign on the board Sunday night read "We will not be silenced, Blue Lives Matter,” according to The Dartmouth.