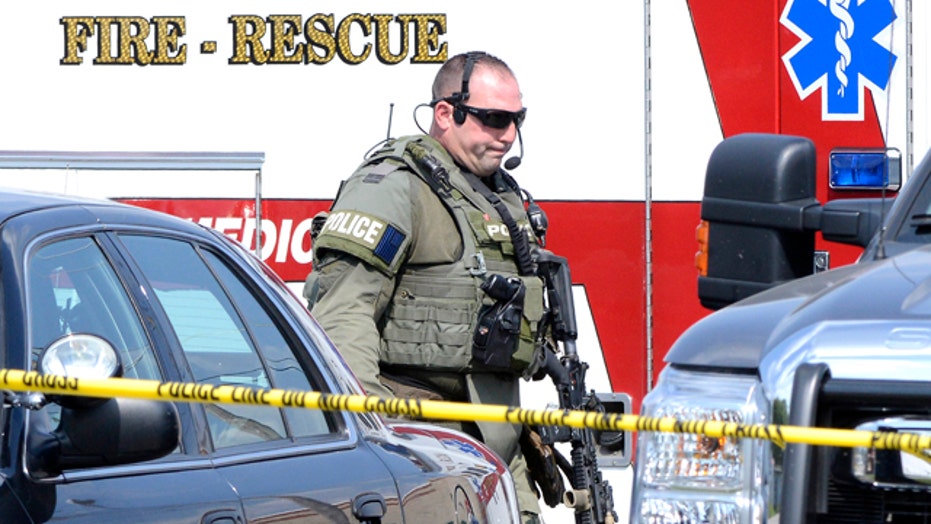 Town on lockdown as search for cop killer suspects continues

Matt Finn reports on manhunt for suspects in Illinois

Dozens of police officers searched without success overnight for three suspects who shot and killed a 30-year veteran of the Fox Lake, Ill. police force.

Lt. Charles Joseph "Joe" Gliniewicz, 52, was shot at approximately 8 a.m. local time Tuesday after he radioed in to tell dispatchers he was chasing three men on foot in Fox Lake. Communication with him was lost soon after. Colleagues who responded found Gliniewicz shot in a marshy area near U.S. Highway 12, a main road through the village of about 10,000 people near the Wisconsin border and about 55 miles northwest of Chicago. He was pronounced dead at the scene.

Lake County Undersheriff Raymond Rose told the Chicago Tribune that Gliniewicz's gun was found nearby. He added that searchers were were working with "limited descriptions" of the suspects, described by police as three males, two white and one black, who should be treated as armed and dangerous.

Helicopters aided about 100 officers who searched the area overnight, a sheriff's office spokesman said. Meanwhile, several schools in the area announced that they would be closed Wednesday due to the ongoing manhunt.

As the search went on, dozens gathered for hours along a street in the village to show their support for law enforcement officers.

Thirty-year-old Dan Raminick held a sign that said "Police Lives Matter." He lives a couple miles away and said officers came by Tuesday evening and thanked the crowd.

Caitlyn Kelly, a 22-year-old student, said she felt compelled to come out after other recent police shootings. She held a sign that said "Blue and Brave."

Authorities from across the state and region poured into Fox Lake throughout the day Tuesday, some wearing tactical gear and toting high-powered rifles. Federal agencies, SWAT teams and 48 police dogs assisted in the search for the suspects, Lake County Sheriff's Office spokesman Sgt. Christopher Covelli said.

Officers could be seen taking up positions on rooftops and along railroad tracks, scanning the terrain with rifle scopes and binoculars. Others leaned out of helicopters with weapons at the ready. Residents were urged to stay indoors. The service of a local commuter train was halted, and residents who wanted to take their dogs out to relieve themselves were told to stay in their homes — with the job of walking the pets handled by police officers.

An emotional Fox Lake Mayor Donny Schmit described the slain officer as a personal friend, a three-decade member of the department and a father of four sons.

"We lost a family member," Schmit said of the 52-year-old officer known around town as "GI Joe." ''His commitment to the people of this community has been unmatched and will be dearly missed."

"This particular officer is a pillar in my community and definitely going to be missed, and (he) touched so many lives," said Gina Maria, a 40-year-old teacher who lives in the community.

Gliniewicz's death is the third law enforcement fatality in Illinois this year, according to the Law Enforcement Officers Memorial Fund. It says firearms-related deaths in the U.S. are down 13 percent this year compared to the same period last year, Jan. 1. to Sept. 1; there were 30 last year and 26 this year.