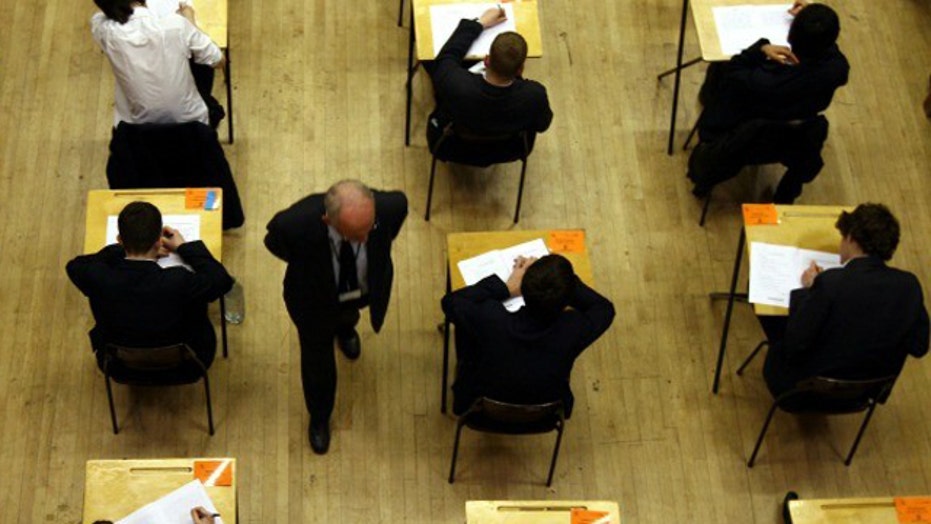 Debate over controversial use of funds

The Advancement Project, a civil rights advocacy group, has a very clear goal. It wants to promote its own brand of progressive racial justice -- and banish effective discipline in public schools across the U.S.

To further that goal, it is now issuing its own report cards on how well schools are doing in carrying out their progressive educational agenda.

"Black kids are more likely than white kids to come from unstable homes," said one expert, speaking bluntly. "Kids who don't come from homes in which they live with their own married parents are more likely to drop out or to have disciplinary issues."

In this construct, the Alexandria, Virginia school systems did not make the grade.

These schools received C's, D's, and F's for their efforts to adhere to the Advancement Project's program, which emphasizes "talking circles" and ignoring bad behavior in lieu of discipline based on infraction and not race, according to a recent report in The Washington Post.

But Helen Lloyd, the communications director for Alexandria city public schools, takes issue with this.

"Alexandria's suspension rates are actually comparatively low when compared to the rest of Virginia," she said of the group's claims. "When you look at Virginia as a whole, we are not disproportionate."

The Alexandria schools are on board with the new directives and their leadership believes they're solving problems with "a thoughtful strategy," Superintendent Alvin Crawley told The Post. But for the liberal Advancement Project -- that isn't nearly good enough.

Instead of addressing challenges in the families, homes, and communities of minority groups that cry out for improvement, it is easier and more progressively palatable for the government and the Advancement Project to charge overburdened public schools with changing their own discipline policies -- at taxpayer expense.

"It seems to me the public schools are being blamed for noticing a problem they didn't cause," Amy Ridenour, chairman of the National Center for Public Policy Research, a conservative think tank based in Washington, D.C., told LifeZette.

"Specifically, as politically incorrect as it may be to say so, the black community gets involved with law enforcement at a higher rate than the white community," Ridenour continued. "Part of the reason for this is that black kids are more likely than white kids to come from unstable homes. The data is clear that kids who don't come from homes in which they live with their own married parents are more likely to drop out or to have disciplinary issues. The schools can't control this. All they can do is try to deal with it."

In trying to destroy the much-touted "school-to-prison pipeline," progressive educational efforts instead destroy the teachers' authority, which is obviously crucial to any learning environment.

"Anyone care to explain to me the school-to-prison pipeline my colleagues and I have somehow created, or perpetuated, or not done enough to interrupt?" St. Paul, Minnesota, teacher Theo Olson wrote on Facebook. "Because if you can't prove it, [with] the campaigns you've waged to deconstruct adult authority in my building by enabling student misconduct, you seriously owe us real teachers an apology."

Even worse, teachers have been asked to examine their own "white privilege" when addressing the discipline of minority students.

"If you tell a black kid that if you work hard you can achieve anything you set your mind to, that's racist, because you are perpetuating a myth of meritocracy," Dan Chriestenson, a two-term school board member from Oregon's Gresham-Barlow school district, told EAGnews.

"They are setting black kids up for failure by telling them that 'whitey' will never let them do it -- this culture will never let them succeed," he continued. "And they're telling white kids that their best efforts will only produce undeserved rewards, because it was all handed to them."

The Project's efforts fall into lockstep with the Obama administration's 2014 educational directives to address racial disparities in school discipline not through accountability -- but through finger-pointing at teachers and administrators. They accomplished this through the release of a school guidance package.

"Effective teaching and learning cannot take place unless students feel safe at school," U.S. Secretary of Education Arne Duncan said in a January 2014 press release announcing cumbersome and wholly unrealistic discipline guidelines for schools. "Positive discipline policies can help create safer learning environments without relying heavily on suspensions and expulsions. Schools also must understand their civil rights obligations and avoid unfair disciplinary practices. We need to keep students in class where they can learn. These resources are a step in the right direction."

How did those guidelines work in the real world? Not too well.

Chicago Mayor Rahm Emanuel announced in June 2014 that the city's schools were moving away from a zero-tolerance policy and promoting restorative practices, according to a report in The New York Post.

By March of 2015, there were little to no consequences for minority students for serious infractions, such as groping a teacher or bringing hollow-point bullets to class, as The Chicago Tribune noted.

Under restorative justice in Syracuse, New York, teachers reported that teens were more apt to fight, mouth off to teachers and roam the halls.

"I remember one occasion when I was cautioned repeatedly to be on alert for my fourth block math class," wrote substitute teacher Pam Saulsby in an op-ed for The Charlotte News-Observer. "When class time rolled around, I learned why. The students came into the classroom loud and unhinged, cursing, playing music, with 'N-word' this, and 'N-word' that. It's an image I will not soon forget."

The Advancement Project studied discipline data from the 2014-15 school year in the Alexandria schools, and found that black students were nine times as likely as white students to receive short-term suspensions in Alexandria. Hispanic students, they reported, received short-term suspensions at four times the rate of white students. Black students were also more likely than whites to be referred to law enforcement for offenses such as defiance, which don't require law enforcement involvement.

"I shifted my focus to helping those who wanted my help," one substitute teacher wrote. "If I could hear, 'Thank you, Miss Saulsby, here you go. I finished my assignment,' my work was done."

The Advancement Project advocates that teachers and administrators focus on "the harm that bad behavior causes" instead of discipline, according to the report in The Post. Teenagers from T.C. Williams High School in Alexandria actually helped to compile The Advancement Project's report card -- which seems approximate to letting the fox watch the henhouse.

Saulsby still ponders the reasons for the struggles of minorities, and wrote in The Observer that she learned to define success in easier -- and lower -- terms.

"I accepted the reality that students, and particularly these students, will test a 'guest' teacher. So I shifted my focus to helping those who wanted my help," she wrote. "If I could hear, 'Thank you, Miss Saulsby, here you go. I finished my assignment,' my work was done. I admit I lowered my expectations dramatically, but that was reality."

The Advancement Project and other groups like it seek changes in the wrong areas, experts agree.

"The tragedy here is not that the schools are disciplining kids, but that so many of them, of all races, need it," said Ridenour of the National Center for Public Policy Research. "Parents, again, of all races, should step up to the plate and work with the schools to make sure their kids go to school with the right attitude. This is in the best interest of the kids."

She added, "It isn't always easy for the parents -- but it is a parental responsibility."