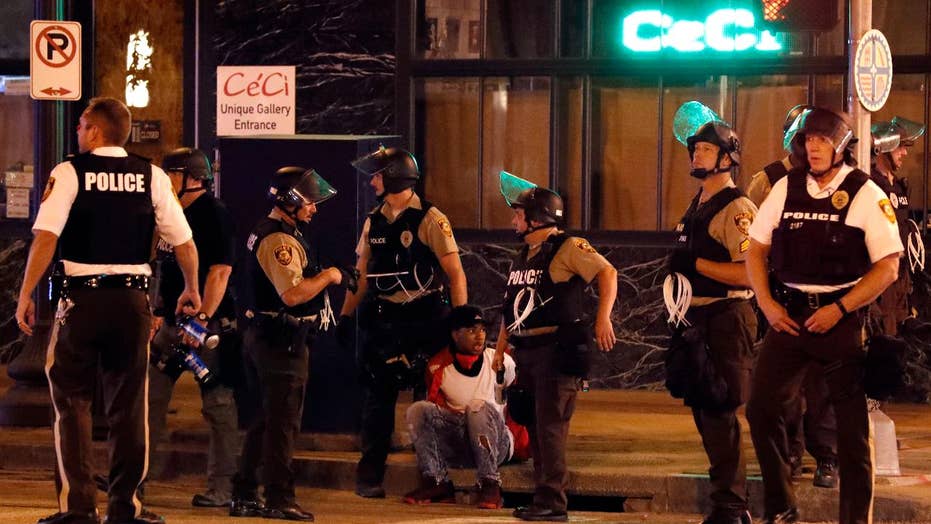 Over 80 arrested in third night of St. Louis protests

Police in St. Louis would be limited from using chemical agents or ordering crowds to disperse under a new effort to protect First Amendment rights of protesters, according to a bill filed this week by a city alderman.

A protester confront police during the second night of demonstrations. Cops may soon be limited in what actions they can take against protesters. (Reuters)

Alderwoman Megan Green's proposal would repeal an existing city ordinance on unlawful assemblies, an ordinance she argues is too vague. The city has faced demonstrations since mid-September, when a judge acquitted former police officer Jason Stockley in the 2011 shooting death of drug suspect Anthony Lamar Smith.

"Our current ordinance really doesn't say much of anything and that is a lot of the problem with it when it is entirely vague it can be interpreted in any way the police want to interpret it," Green told FOX 2.

The American Civil Liberties Union of Missouri helped draft Green's bill, which it said would help protect protesters' First Amendment rights. The group is also suing the city over the police response during the first week of demonstrations following the Stockley verdict.

Former St. Louis police officer Jason Stockley, is seen at left, while Anthony Lamar Smith, who was killed in the shooting incident with the officer, is seen at right. After incidents between police and protesters following Stockley's acquittal, a city alderman filed a new bill to limit police tactics. (Fox News/AP)

The ACLU said Board Bill 134 limits when officers can use tear gas and pepper spray as a tactic to get people to leave a demonstration, and would prohibit use of such chemical agents on people when they're restrained.

ACQUITTED ST. LOUIS OFFICER STOCKLEY SPEAKS OUT: 'FEELS LIKE A BURDEN HAS BEEN LIFTED'

“St. Louis needs to establish clear guidelines to protect people as they call for change in the region,” said Sara Baker, legislative and policy director at the ACLU of Missouri. “Without establishing clear guidelines for law enforcement, we risk creating a chilling atmosphere during a critical time where the voices of the people must be heard.”

St. Louis mayor: Our goal is to protect rights of protesters

Green told FOX 2 the proposed bill clearly defines what an "unlawful assembly" is.

The bill would also mandate that law enforcement must have their name tags visible at all times, and require police to promptly process and release those who've been arrested.

Police officials told FOX 2 they have not reviewed the proposed legislation yet, and did not have a comment.