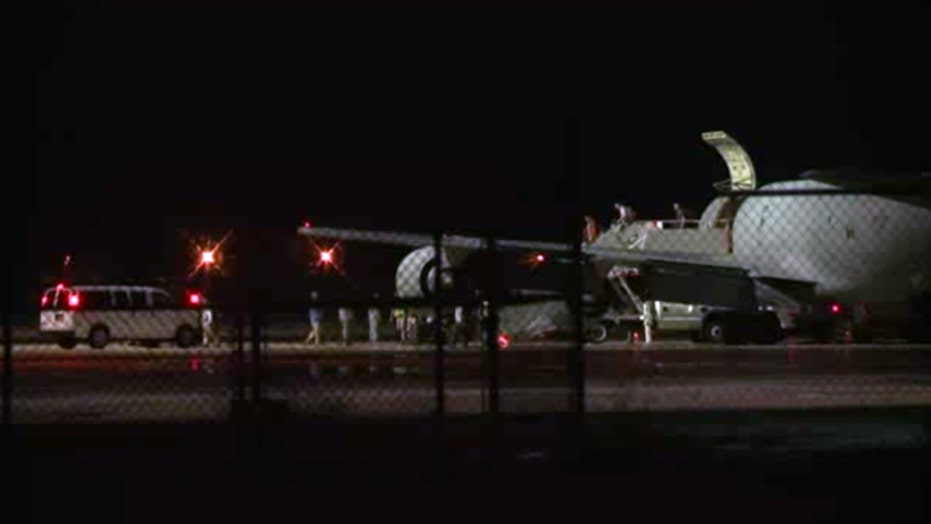 Sergeant Bergdahl back on American soil

Bowe in Texas to continue reintegration

Army Sgt. Bowe Bergdahl is back in America, but it will be months before his future takes shape, according to both experts in the military's legal system and people familiar with the treatment of long-term captives.

After nearly five years in the hands of the Taliban and Haqqani network in Afghanistan and Pakistan, the American soldier was exchanged for five top Taliban operatives, underwent medical and psychological treatment at Landstuhl Regional Medical Center in Germany and, Friday morning, landed at a military base in San Antonio. There he will undergo treatment to reintegrate back into society -- or possibly military prison.

Until his medical treatment is complete, a process than can last up to several months, it’s unclear how the military will treat a soldier alleged to have willingly left his firebase in Afghanistan. There is a raft of legal options the Army can pursue that extend to as much as five years in prison. Or the military can wash its hands of the young soldier and administratively separate him.

“The jury is literally still out,” said retired Maj. Gen. Charles Dunlap, a former judge advocate general of the Air Force. “We really don’t know the charges, if there are any, against him. There needs to be more wringing of the facts before anything is decided.”

In the meantime, Bergdahl will be at Brooke Army Medical Center in San Antonio for additional medical and psychological treatment until doctors deem him ready to reunite with his family. During the final phase of the reintegration process for former prisoners of war, treatment can last from a few days to a few months. Medical professionals won’t have a sense of how long Bergdahl will need until he starts treatment.

Brooke Army Medical Center handles the Army’s reintegration process for military personnel and contractors taken captive and helps them regain control of their life, including their schedule and meals. In 2008, the hospital treated three defense contractors who were taken hostage by Colombian guerillas and held for five years. While they were at Brooke Army for two weeks, military officials have said Bergdahl will likely need several months.

“If you rush it at all, all your work will be out the window,” said Arwen Consaul, a spokeswoman for Army South, which oversees Brooke Army Medical Center.

Until the 28-year-old soldier finishes his reintegration process, Army investigators will not be able to question him closely about the circumstances surrounding his departure from his firebase in Eastern Afghanistan and resulting capture. Army officials have said that he has undergone briefings to glean intelligence about his captors and conditions. That information will not be used in a potential case against him, military officials have said.

Top military officials have all promised a thorough review of Bergdahl’s disappearance after his medical treatment is complete.

"As Chairman [of the Joint Chiefs of Staff Martin] Dempsey indicated, the Army will then review this in a comprehensive, coordinated effort that will include speaking with Sgt. Bergdahl to better learn from him the circumstances of his disappearance and captivity,” said Secretary of the Army John McHugh in a statement. “All other decisions will be made thereafter, and in accordance with appropriate regulations, policies and practices.”

An investigation into Bergdahl’s absence was conducted for several months in the summer of 2009 after he vanished in June. All the members of his platoon were interviewed, as well as his company and battalion commanders, for a 15-6 report that remains classified. The military has refused to release the report and Bergdahl has yet to speak publicly.

While the Army has promised a review, military officials have been tight-lipped about what it will entail and whether Bergdahl’s platoon members will be questioned again.

Bergdahl’s disappearance and treatment in captivity has been clouded in mystery. Several of his former platoon members accuse him of desertion and prompting the deaths of as many as eight soldiers involved in searches for him. Other reports indicate that he may have left his firebase to link up with the Taliban or gone for a walk with Afghan soldiers who may have double-crossed him.

Given the paucity of reliable information about his disappearance, it’s difficult to say what legal measures, if any, the Army will pursue against Bergdahl, experts said. Two options include charging him with desertion or being absent without leave. Much of his fate will revolve around his state of mind when he left. For the AWOL charge, prosecutors will have to show that Bergdahl left his firebase and planned to eventually return.

If he deserted, investigators must prove that he left with the intention to not return and to shirk hazardous duty. There may be grounds for a desertion charge if some of the claims made by his fellow soldiers that he sent his computer home, left his plate carrier at the firebase, and spoke about walking to China are proven.

Lawyers said if he had been charged, it would have been made public. The maximum charge for being AWOL is 18 months confinement.

A desertion charge, however, can be brought at any point. Thus far, Bergdahl has not been declared a deserter, a Pentagon spokesman said. If he is court-martialed and found guilty of desertion, his maximum punishment would be a dishonorable discharge and five years of prison time.

“It doesn’t smell like a desertion case,” said Greg Rinckey, a former Army JAG officer and an attorney in private practice in Washington, D.C.

Some details have leaked out in the weeks since Bergdahl was swapped for five Taliban detainees on May 31, leading observers to think he was not in collusion with the Taliban. There have been reports he escaped twice during his nearly five years in captivity and placed in a steel cage for weeks. If he was indeed mistreated and escaped, military legal experts say they will be a mitigating factor in a possible future case.

Collaboration with the enemy, a possibility that has been floated, also appears unlikely at this point because no hard evidence has yet surfaced. Thus far, only allegations that he converted to Islam, carried a gun, declared himself a warrior for Islam and lived openly with his captors.

“We don’t know what he did or said. It’d be very difficult to prosecute on collaboration because we need evidence,” said Philip Cave, a military defense lawyer and a former Naval attorney based in Alexandria, Va.

Military attorneys believe Bergdahl won’t face a court martial because of the politics involved in his release. Republicans and Democrats have turned the prisoner of war’s return into a political football to score points with each other before the midterm elections in November, complaining that the President should not have traded Taliban militants imprisoned at Guantanamo for Bergdahl.

“My gut reaction is that he won’t be court-martialed,” said Cave. “Why? Politics. There’ll be enough that’s he suffered enough and that’ll outweigh that he’s a bad example.”

Several military legal experts said they don’t understand why President Obama held a press conference with Bergdahl’s parents in the Rose Garden of the White House and touted him as a hero. The president’s legal advisors must have known of the classified report into the soldier’s disappearance, and should have instead issued a short press release.

“Based on how this went down with the president, they’re going to be hard pressed to charge this soldier even if the investigation finds desertion,” said Rinckey.

Without a court martial, Bergdahl could still receive punishment in another form. Instead of an honorable discharge, the soldier could receive another administrative discharge of general, or "other than honorable" conditions.

A general under honorable conditions discharge is for those whose service was satisfactory but were involved in minor misconduct, like substance abuse or absences. Soldiers who receive a general discharge are entitled to Veterans Affairs health care and home loans but cannot receive educational benefits, like the GI Bill.

A discharge under other than honorable conditions is for those soldiers who have a pattern of misconduct that could include violent behavior, fraudulent enlistment disobeying an order. With an OTH discharge, a service member does not receive Veterans Affairs benefits.

“The jury is literally still out,” said Dunlap, now a law professor at Duke University in Durham, North Carolina. “It will surprise me if the Army comes out with anything in the near term. They want to let everything settle.”

Kristina Shevory is a freelance journalist and U.S. Army veteran