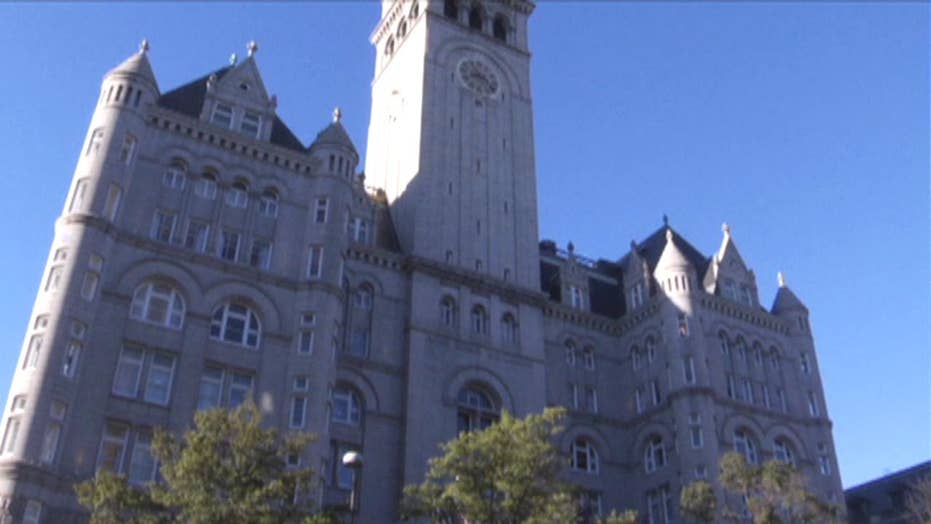 See and hear the 10 Congress bells, replicas of those in Westminster Abbey in London

When then-candidate Donald Trump cut the ribbon reopening Washington's storied Old Post Office Pavilion as the new Trump International Hotel, little attention was given to the national treasure hidden inside: A clock tower that now provides the best view in the nation's capital.

The gilded, Romanesque building, completed in 1899, is the second tallest structure in Washington D.C. is owned by taxpayers, but leased to Trump's company. And with the Washington Monument closed for renovations, the tower is the highest point the public can visit.

Fox News recently toured the clock tower, taking in the 360-degree view of the city from a room that includes 10 bells. The tower is operated by the National Park Service, and public tours conducted by the service are set to begin soon.

The bells that chime on federal holidays, presidential elections and inaugurations are a big part of the buildings legendary history. In 1976, to mark the Bicentennial, a British philanthropic organization, the Ditchley Foundation of Great Britain, gifted them to Congress.

In 1983, the bells, a symbol of friendship between old allies, were installed in the clock tower. In addition to ringing on special occasions, they are also heard on Thursday nights, when the Washington Bell Society practices for the big events.

Police stand guard outside the Trump International Hotel on Pennsylvania Avenue in Washington in this January file photo. (Associated Press)

The Old Post Office’s position between the White House and Capitol Hill is part of ots historic legacy, according to Jane Levey, a member of the Historical Society of Washington.

“So it was the most important government function for the pretty much the first hundred years next to defense,” she added.

But over the years, the building has had narrow escapes from the wrecking ball and was even once a focal point in a sketchy neighborhood that included numerous bars and brothels. Levey said the surrounding area was once so dangerous, it was unofficially dubbed “Murder Bay.”

Those days are gone, and the Old Post Office and its clock tower are once again a prominent part of the nation's capital, with a direct link to the current occupant of the White House. And soon, the public will be able to take in the view Fox News enjoyed.

"Now the Old Post Office is right in the center of Pennsylvania Avenue, America’s main street," said Mike Litterst, spokesman for the National Park Service. "So you’ve got the Capitol out the east side, you’ve got the White House out the west side, a complete view of the National Mall with all the museums, Washington Monument and the Lincoln Memorial.

"If you’re coming to town to explore and see what there is," said Litterst, "this is a great place to start."