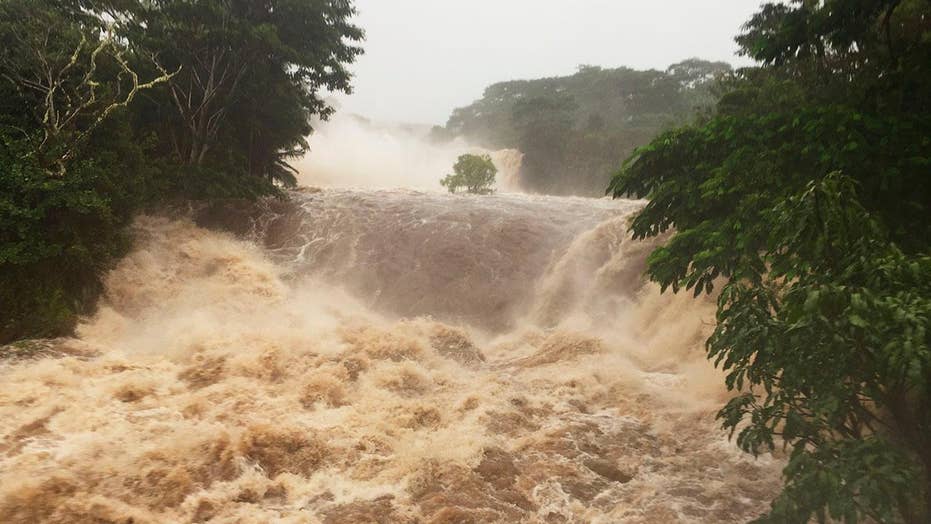 The slow-moving category two hurricane continues to churn toward the Hawaiian Islands, bringing the threat of catastrophic flooding and mudslides.

A BBC reporter covering Hurricane Lane in Hawaii was hit by a falling tree during a live radio report.

The reporter, James Cook, was describing the storm’s path when a loud crack is heard in the background, according to the recording released by the BBC. The sound of rustling leaves can also be heard as the tree falls.

A few seconds later, Cook struggles a bit before announcing that he’s “alright.”

Cook, uninjured, then tells his colleagues to not move the tree, managing to make his way out from under the branches himself. It’s at that point he noticed that his laptop had been crushed.

Hurricane Lane was downgraded to a tropical storm on Friday evening, according to the National Weather Service's Central Pacific Hurricane Center (CPHC).

"The good news is Lane got weak and fell apart. We dodged a bullet," Honolulu Mayor Kirk Caldwell said at a news conference Friday.

HURRICANE LANE THREATENS HAWAII: WHAT TO KNOW ABOUT THE RARE STORM'S PATH

However, Hawaiians aren’t totally in the clear as of yet. As of 2:00 a.m. on Saturday, the weather service said that the storm was moving “slowly toward the north-northwest south of Hawaii” and that “Lane’s outer rain bands  [are] producing severe flooding across parts of the Hawaiian islands.”