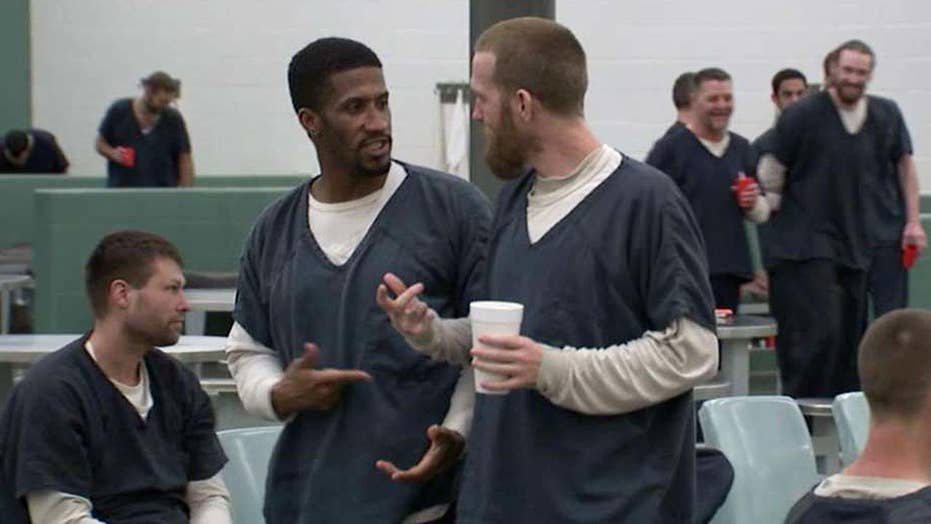 Sam Hall sat on his narrow bed, his thin frame propped up against the concrete wall, periodically glancing up from a well-worn paperback novel. He was waiting for his afternoon addiction recovery meeting to begin.

Sam has been clean and sober since last summer when he was arrested for driving under the influence. At the time, he had been an alcoholic and a regular heroin user.

He's not alone. According to the National Institutes of Health, almost 10 million adult men have “Alcohol Use Disorder.”

“It's gotten to the point now where it's just-- I'm either going to get out of here,” Hall reflected, “or I'm gonna die this way. I mean, that's it.”

Research shows that children of alcoholics are more likely to become addicted themselves. Sam’s father was an alcoholic who managed to quit drinking, but that didn’t stop Sam from falling victim to the same disease.

But, it eventually started to hurt to drink. So, I eventually moved on to opiates, which eventually led on to heroin.

“I used to be a really bad alcoholic,” Hall explained. “I drank profusely. Eventually, it started to hurt my body when I drank. 'Cause I was drinking a lot. I'm only 36 right now. The level that I was drinking at was crazy.”

“But, it eventually started to hurt to drink,” Hall admitted. “So, I eventually moved on to opiates, which eventually led on to heroin.”

Men not only abuse alcohol at higher rates than women, but they are also more likely to use almost all types of illicit drugs.

Hall is trying to stay sober, and working on his recovery in an unexpected place – jail.

That jail, in Kenton County, Kentucky, is run by Terry Carl, the elected county jailer.

“I've been here all my life,” Carl told Fox News. “I know the people. I really care for the people.”

In 2015, the jailer started an innovative pilot program at the jail to provide in-house rehab for inmates.

“A lot of it had to do with people leaving the jail,” Carl explained. “They've been in here, say, two weeks, six months. And-- they would leave the jail. And a couple days later they'd-- overdose and-- and die.”

Though some are ordered by the court to enroll in the program, the vast majority of men sign themselves up, and the program is so successful that it has a running waitlist.

Why not plug in a relatively low-cost social service program that would give someone a chance at life instead of just doing time and going back out and doing the same things over and over again.

Merrick told Fox News that about 83 percent of the men and women booked into the Kenton County Detention Center find themselves in jail “indirectly or directly related to their substance abuse.”

“Why not plug in a relatively low-cost social service program that would give someone a chance at life instead of just doing time and going back out and doing the same things over and over again,” Merrick lamented.

That rehab program, called Unit 104, houses 70 men just like Hall. They have access to alcoholics and narcotics anonymous meetings, along with a daily schedule of classes to prepare for the G.E.D. or future job interviews. Several times a day the men sit together and share their stories with one another, gathering strength and reminding one another how far they’ve come and how much work remains ahead.

The men of Unit 104 may not have known each other before coming to jail but they all share the belief that their addictions to drugs and alcohol brought them to this point.

Unfortunately, Hall has firsthand experience. He lost his wife Melissa to a drug overdose, just a few months after he entered jail on charges of DUI and wanton endangerment.

Hall said his wife was using drugs before getting ready for work one morning, and overdosed at home, not far from their young daughter. His worst fears were confirmed when he was pulled into a private room and told the news.

Because Hall was incarcerated at the time, he was unable to attend her funeral, something he struggles with daily, on top of the guilt he feels after introducing drugs into her life.

“I didn't get to go to the funeral. So, I've been here the whole time,” he shared. “My wife-- she never did anything before she met me. And then it kinda transcended into her using as well. And it's very hard to deal with the guilt. I deal with it every day.”

Hall believes his three children, including that young daughter, will motivate him to stay on the straight and narrow when he leaves jail.

No one has to die. This is preventable. This is treatable.

The jail’s rehab program has become a source of hope for these men, stuck in a deadly cycle. Merrick said that they are seeing 71 percent of the clients who complete the program do not return to jail within the first 12 months after being released. “When you look at the opposite, those that are not engaged in treatment and not engaged in programming, 70 percent are likely to come back. So it's exactly flipped,” said Merrick, pointing to their remarkable success rate.

“No one has to die,” Merrick asserted. “This is preventable. This is treatable.”

For his part, Hall has been anxious to get home and back to work. Ultimately, the goal shared by those administering and participating in the program is that more men in Kentucky will see things the way Hall does.

“Things will get better if you try to make them better,” Hall said with confidence. “It's not easy. [A]nything that's worth doing is not easy at all.”