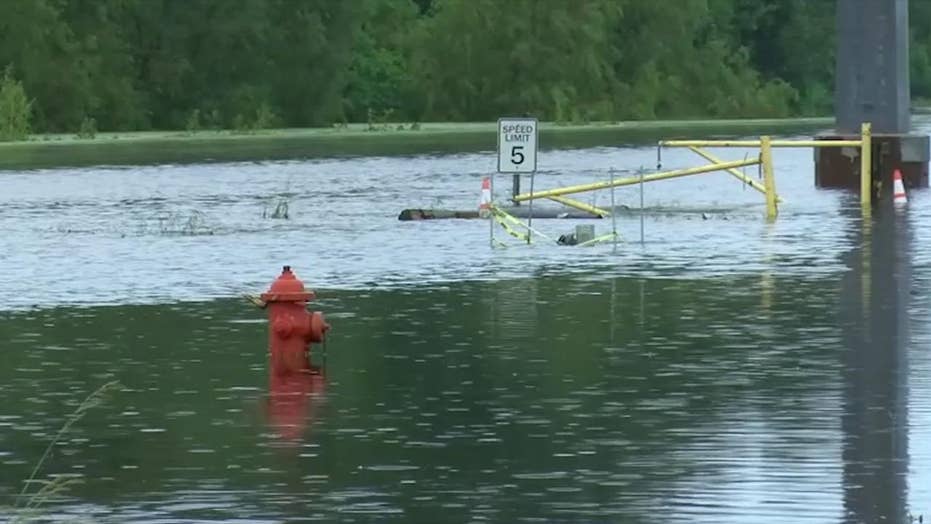 Louisiana officials are learning what worked and what still needs improvements after Hurricane Barry dumped heavy rain on the state’s multi-billion-dollar post-Katrina flood defenses, put to the test for the first time when the storm hit.

BATON ROUGE, La. -- Louisiana officials are learning what worked and what still needs improvements after Tropical Storm Barry dumped heavy rain on the state’s multi-billion-dollar post-Katrina flood defenses, putting the costly equipment into use for the first time when the storm hit this past weekend.

“It's the first time that it has been fully operational…that we've had all flood gates closed…all pump stations operational…so it was really a test,” said Chip Kline, coastal activities director for the state of Louisiana.

“A lot of viewers around the country probably don't realize that the hurricane protection system has not yet been turned over to the state of Louisiana…the Army Corps of Engineers still has some finishing touches,” Kline said.

Recent engineering reports have shown the system of levees built to protect New Orleans and the surrounding region from major flooding associated with a 100-year storm is sinking.

This comes as the 14th anniversary of Hurricane Katrina, which left an estimated $151 billion in damage and more than 1,800 dead, approaches.

During Katrina, there were more than 50 levee and floodwall failures. Several factors led to failure, including improper maintenance, design flaws and unfinished construction.

There was also catastrophic flooding to coastal Louisiana in 2016, when the Comite River crested at historic levels, resulting in flash flooding that killed 13 people.

Kline said while he is grateful for the money, he wishes it was invested sooner rather than later.

During a tour of the damage caused by Hurricane Barry in Myrtle Grove on Monday, Louisiana Gov. John Bel Edwards said, “We’re in better shape today than we’ve ever been to take a storm…There will always be work to do…but right now we’re…thankful that mother nature wasn’t more severe with us on this occasion than she could’ve been…”

Some technology implemented after Katrina has proven its worth.

Kline said forecasting models are being used instead of land maps and there is now real-time information gathering on the ground to better predict storm patterns and evacuation orders.

“We ran a storm surge inundation model and we could actually tell which levees could potentially be overtopped, which communities are most at risk, ” Kline said. “This drove where we pre-position flood-fighting assets, where the Louisiana National Guard was positioning high-water vehicles and sandbagging operations.”

Barry was a Category 1 hurricane that downgraded to a tropical storm when it made landfall on Saturday. It became a tropical depression on Sunday. The storm was not as powerful as forecasters expected but helped in training and preparation efforts statewide.

While officials work on a game plan for the next storm, they’re breathing a sigh of relief that Barry wasn't catastrophic.

“Thank goodness Barry was not a very serious storm, but it allowed us to exercise the entire command on missions and it helped us work through a lot of procedural things to better respond to people’s needs,” said National Guard Gen. Glenn Curtis.

There are still 20 weeks left in this year’s hurricane season, leaving state officials fearful that what is damaged after this weekend’s storm could be made worse by a stronger system in the coming months.

“Each storm has a mind of its own and it’s going to do what it wants to do…you’re going to have to deal with it whether you like it or not,” said Kline. “We just have to be prepared for the worst and hope for the best.”